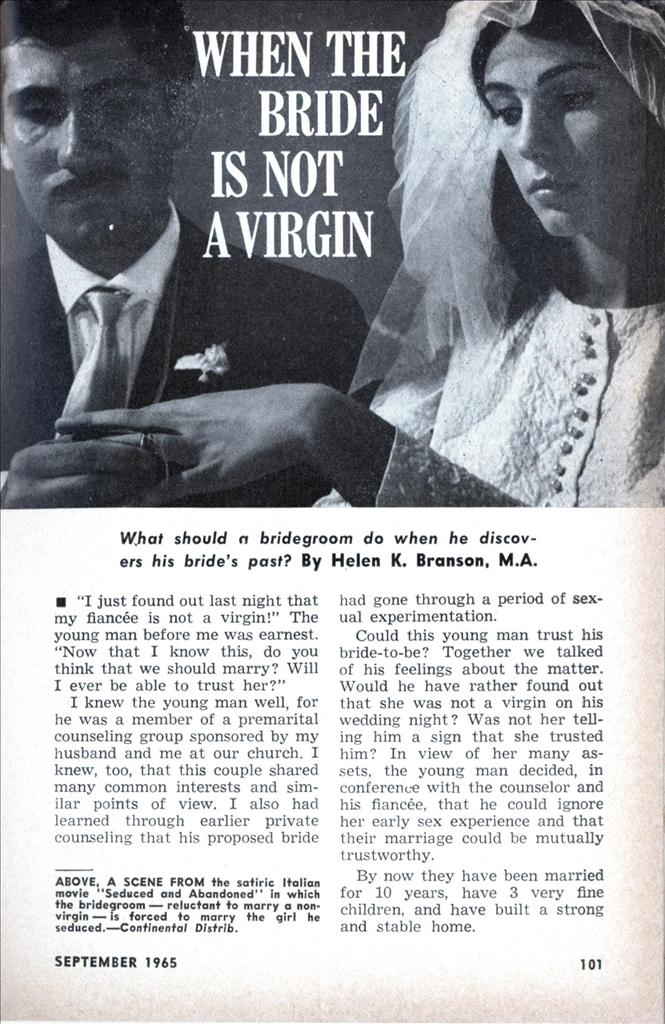 When the Bride is Not a Virgin

What should a bridegroom do when he discovers his bride’s past? By Helen K. Branson, M.A.

“I just found out last night that my fiancee is not a virgin!” The young man before me was earnest. “Now that I know this, do you think that we should marry? Will I ever be able to trust her?”

I knew the young man well, for he was a member of a premarital counseling group sponsored by my husband and me at our church. I knew, too, that this couple shared many common interests and similar points of view. I also had learned through earlier private counseling that his proposed bride had gone through a period of sexual experimentation.

Could this young man trust his bride-to-be? Together we talked of his feelings about the matter. Would he have rather found out that she was not a virgin on his wedding night? Was not her telling him a sign that she trusted him? In view of her many assets, the young man decided, in conference with the counselor and his fiancee, that he could ignore her early sex experience and that their marriage could be mutually trustworthy.

By now they have been married for 10 years, have 3 very fine children, and have built a strong and stable home.

This is not to say, of course, that virginity is not an advantage in many instances. If this girl had not been forced by her own personal qualities to learn about sex from experimentation, her fiance would not have doubted her in the first place. But it does illustrate that good marriages can be built on firm grounds even when there is something in the past— sexual or otherwise—that needs to be discussed and thought through ahead of time.

Some may say that this girl is the exception to the rule, and that once a girl begins sexual relations, she loses her inhibitions in this regard. Many boys seem to have this point of view. This, however, is not a sound assumption. It involves, in my opinion, a male error in the understanding of the female point of view.

The vast majority of girls who have sex relations before marriage are not promiscuous and uninhibited. Most of them have a strong emotional attachment for the person with whom they share sexual intimacy—even though this “attachment” may be a temporary one. The fact that a woman has had sex experiences before marriage does not mean that she will not be faithful to her husband when married.

Whether the bride-to-be should have told her fiance about her past sexual experience is another matter. Most counselors feel that it is by no means wise to do so.

In spite of the fact that our double standard of sex — which says that sex before marriage is all right for men but not for women—is weakening, it still has a strong hold on most men. A great many of them, no matter how sexually liberated they feel themselves to be, still can’t accept the fact that their wives have had sexual experiences while unmarried.

Often when an engaged woman or a wife confesses to past experience, she docs it out of a sense of guilt. If she does feel the need for confession, she should seek out a counselor to discuss her problems with. She should not burden her husband with them.

People must be accepted as they are without too deep a prying into their past. If they seem suited as a partner at a particular time, past experiences should not change this.

However, there is no doubt—our society being what it is — that certain problems may be created when the bride is not a virgin which may require a special adjustment.

The wise husband who knows that his bride is a virgin recognizes that sex may be new to her, and that she may require considerable emotional reassurance as their sexual life grows.

If his bride is not a virgin, on the other hand, he may fear that she has enjoyed sexual relations more with some other partner and is making comparisons. Some men may feel that they may be less adequate physically than the other partners and thus do not make as adequate lovers.

What these men need to realize is that the satisfaction which the wife receives from sex relations is based far more on mutual affection than it is on physical factors and techniques.

The wife who has had sex relations with others before marriage is frequently afraid to be sexually aggressive for fear her husband will consider this as an indication that she is not readily satisfied by his love-making. For this reason, the husband should never hesitate to encourage her.

He should let her know that her initiation of Sexual relations is not only acceptable to him, but from time to time enhances his feelings of security. This, of course, lets him know that she is not merely submitting to his desires, but that she appreciates them enough to seek his physical attentions.

It is not so often demanded that the husband be a virgin. In fact, many women have the idea that unless a man has had some sexual experiences before marriage, he may be clumsy or crude in sex relations.

This belief also is not necessarily true. The husband may go through a learning period in sex just as she does. With her cooperation he can learn in a very short time the things that supposedly “just come naturally.”

Much worry over the “first night” is needless. Experienced or not, no person’s sexual approach exactly matches that of another, and the following of natural impulses without inhibition usually results in adequate adjustment in a short time.

As the 10-year experience of the couple I have described shows, lack of virginity at marriage need not prevent a stable, happy marriage. If it appears likely that it might, the couple should postpone marriage until they can find a way of truly accepting each other completely as they are.