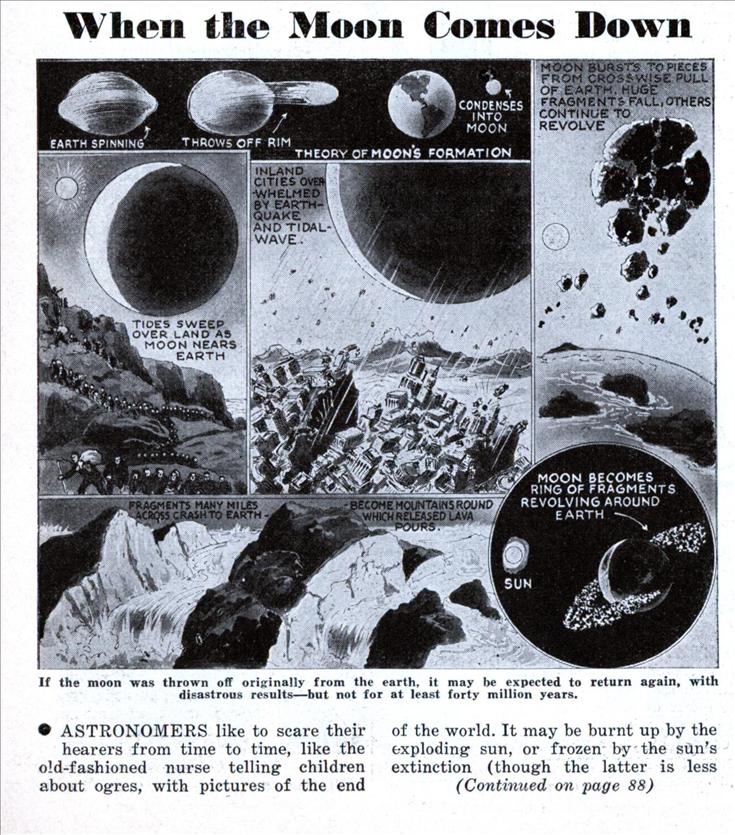 When the Moon Comes Down

ASTRONOMERS like to scare their hearers from time to time, like the old-fashioned nurse telling children about ogres, with pictures of the end of the world. It may be burnt up by the exploding sun, or frozen by the sun’s extinction (though the latter is less probable); it may lose all its air by radiation into space, and chemical absorption into the earth. But, at the close, the audience is reassured that their fear of its happening in a million years is baseless—that the earth has at least ten million years of existence ahead—and they go away relieved.

A short time ago Sir James Jeans dramatized for his hearers the calculations of Sir George Darwin (son of the naturalist). The latter’s theory is still upheld: that the moon, having been thrown off from a rapidly rotating earth, is gradually returning. As it comes back, it slows down the rotation of the earth; and the tides come ever higher and higher. In 36,000,000 years, more or less (what is a million years to an astronomical prophet?), the moon will fill a huge area of the sky and raise tides 650 feet high in the sea. Worse than that, it will raise tides in the land, causing continual earthquakes. The tidal action of the earth itself on the moon will be far greater; the moon will finally burst to pieces. Some will continue revolving around the earth, forming a ring like that of Saturn. Others will escape into space, but the bulk of the moon will fall as prodigious meteorites into the earth, breaking its crust to pieces. The poles might well escape from this shower; but it is to be presumed that the earth will have become uninhabitable. Finally, the earth and moon will again be one; the earth’s diameter in- creased perceptibly around the equator, but all the works of forgotten man buried under the pulverized moon.

It is interesting, and a bit sensational but, since later astronomers deny Sir George Darwin’s first assumption—that the moon was originally part of the earth (see “Where Did the Moon Come From?” in our December, 1935, issue)—it is possible that his result is wrong. In any event, you need not put off any needed purchases till the year 36,001,936 to see how the moon is holding off.