TIL, when a wife says no, it’s always because there is something wrong with her. 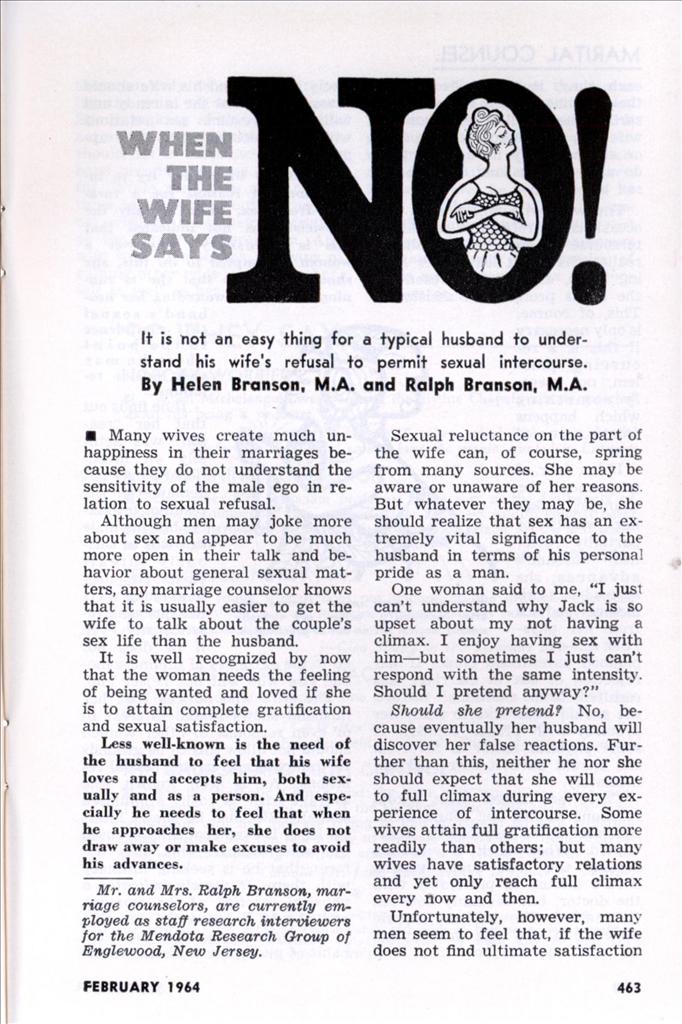 WHEN THE WIFE SAYS NO!

It is not an easy thing for a typical husband to understand his wife’s refusal to permit sexual intercourse. By Helen Branson, M.A. and Ralph Branson, M.A.

Many wives create much un-happiness in their marriages because they do not understand the sensitivity of the male ego in relation to sexual refusal.

Although men may joke more about sex and appear to be much more open in their talk and behavior about general sexual matters, any marriage counselor knows that it is usually easier to get the wife to talk about the couple’s sex life than the husband.

It is well recognized by now that the woman needs the feeling of being wanted and loved if she is to attain complete gratification and sexual satisfaction.

Less well-known is the need of the husband to feel that his wife loves and accepts him, both sexually and as a person. And especially he needs to feel that when he approaches her, she does not draw away or make excuses to avoid his advances.

Sexual reluctance on the part of the wife can, of course, spring from many sources. She may be aware or unaware of her reasons. But whatever they may be, she should realize that sex has an extremely vital significance to the husband in terms of his personal pride as a man.

One woman said to me, “I just can’t understand why Jack is so upset about my not having a climax. I enjoy having sex with him—but sometimes I just can’t respond with the same intensity. Should I pretend anyway?”

Should she pretend? No, because eventually her husband will discover her false reactions. Further than this, neither he nor she should expect that she will come to full climax during every experience of intercourse. Some wives attain full gratification more readily than others; but many wives have satisfactory relations and yet only reach full climax every now and then.

Unfortunately, however, many men seem to feel that, if the wife does not find ultimate satisfaction each time, it is a reflection on their manhood. This is not necessarily true at all. The reason the wife may not respond at one time or another, may have nothing to do with the husband or even the sex act itself.

The wise wife will And as few occasions for refusal of sexual intercourse as possible. She should realize that, if it leaves her feeling tense, disgusted or resentful, she needs professional assistance. This, of course, is only necessary if this is a recurring problem, not merely something which happens from time to time.

If her fear of pregnancy, for example, makes her wholly or partially reject her husband’s advances, she should seek medical advice from her physician or a planned parenthood clinic. If her rejection of sex in marriage has resulted from emotional factors, she should undertake to study her problem with proper counsel. If some physical factor is involved, she should have it corrected immediately.

There are times when sexual relations should, for sound medical reasons, be temporarily interrupted. When such a situation occurs, the wife and husband should discuss it, preferably with the doctor, but certainly between themselves. The husband should understand why the interruption is necessary, and how long it is likely to last. And his wife should reassure him that she is ready and willing to resume sex relations when the doctor gives his approval. , Sometimes wives may try to invent medical reasons for a vacation from sex, when actually the physician has not indicated that this is necessary. Whenever a woman is tempted to do this, she should recognize that she is running the risk of wounding her husband’s sexual self-confidence to the point where he may seek outside relations.

If he finds out that her “reason” was actually an invention. he may not demand that she resume intimacy, but his male ego will be seriously threatened. He may fiind many ways to express his resentment, even if he does not go to the extremes of finding someone else who will not reject him.

The wife who notices that her husband shows sexual interest in or even responds to other women should not allow this to be grounds for reluctance in having sexual relations. As is well known, the average male is easily stimulated sexually. Because he shows interest in, or is even erotically aroused by, other women, this does not mean that he is seeking intimacy with them. It merely indicates a physical reaction of the moment, and should be regarded as such.

The woman who falls into the habit of giving her husband sexual attention only as a bribe is missing the point of sex in marriage. She is making of the marital sex act an act of prostitution, and she should not be surprised if her husband becomes restless and resentful. While men may seek prostitutes as a means of outlet, they do not wish to base their marriages on the same commercialism. Any wife who uses sex as a means of gaining other ends is cheating herself as well as her husband.

Sexual relations are the means to gaining mutual gratification. The attainment of this goal is both prolonged and immediate. Even when a refusal of sexual intercourse is justified and necessary, it should never be accompanied by scorn or ridicule. It should contain the mutual understanding that changes rejection into a temporary interruption, with the promise of future resumption of sex relation* as soon as possible.