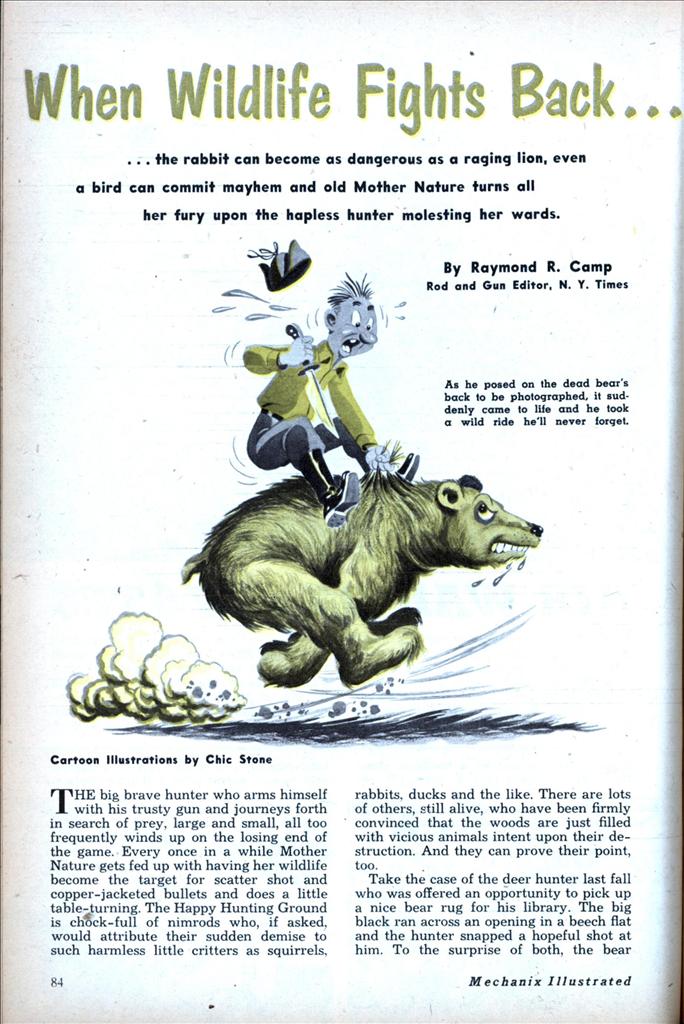 When Wildlife Fights Back…

. . . the rabbit can become as dangerous as a raging lion, even a bird can commit mayhem and old Mother Nature turns all her fury upon the hapless hunter molesting her wards.

tod and Gun Editor, N. Y. Times THE big brave hunter who arms himself with his trusty gun and journeys forth in search of prey, large and small, all too frequently winds up on the losing end of the game. Every once in a while Mother Nature gets fed up with having her wildlife become the target for scatter shot and copper-jacketed bullets and does a little table-turning. The Happy Hunting Ground is chock-full of nimrods who, if asked, would attribute their sudden demise to such harmless little critters as squirrels.

rabbits, ducks and the like. There are lots of others, still alive, who have been firmly convinced that the woods are just filled with vicious animals intent upon their destruction. And they can prove their point, too.

Take the case of the deer hunter last fall who was offered an opportunity to pick up a nice bear rug for his library. The big black ran across an opening in a beech flat and the hunter snapped a hopeful shot at him. To the surprise of both, the bear folded up. The guide, who had paused at a spring to quench his thirst, appeared at the sound of the shot, and seeing the prone bruin, congratulated his hunter. It was decided that the guide would take a photograph of the hunter seated astride the fallen bear, rifle in one hand and poised hunting knife in the other.

The hunter took his position, the guide began fussing with the camera and the bear, apparently only stunned by the bullet, came to life. The hunter, astride a bear that was now very much alive, had no option but to hang on. He threw away the rifle but clung to the knife, which was a mistake for when he finally lost his seat he buried it to the hilt in his own thigh. In addition to the wound, the incident had a psychological effect upon him and he relives the experience in a nightmare every few weeks, which does not make his home life any happier.

There are few instances on record in which the fox has managed to shed human blood. In England and parts of this country an occasional pink-coated foxhunter tumbles from his horse while pursuing a pack of hounds which in turn is chasing a fox. However, an upstate New York hunter who hunted these animals on foot is now convinced that there is some truth even in the antiquated theory that a worm will turn. Three hunters, each with a pair of foxhounds, met at a designated spot in the hills for the first hunt of the season. The hounds soon were off in full cry in pursuit of a big red fox and the hunters scattered to assorted vantage points. One selected a rocky knoll overlooking a narrow draw which seemed to be an ideal route for a harried fox. And his guess was a good one.

The cry of the hounds came nearer and nearer and in a few minutes the fox appeared at the mouth of the draw, looked quickly around, then scampered up the narrow defile emerging only 20 feet from the hunter who raised his trusty shotgun with dispatch. The fox rolled over at the double blast but a second later regained its feet and ran straight for the hunter.

Unquestionably the animal’s direction was guided by confusion rather than vicious intent but the hunter, having heard tales of rabid foxes, had visions of being subjected to a long and painful injection treatment. His gun empty, he decided his only chance was to outrun the fox. But his route also was influenced by confusion, for he ran right off the rocky ledge. Whether or not the Pasteur treatment would have involved more pain and inconvenience than a broken leg, three broken ribs, a fractured collar bone and the loss of half an ear is a matter for some | debate. The fox, having done his job, proceeded to drop dead of wounds a few feet short of the initial position held by the hunter. The frostbite sustained by the hunter as the result of exposure prior to his discovery by the others is hardly worth mentioning for he was unconscious during the painful period of this malady.

Although there are reputedly quite a few individuals who have traveled to that bourne where the woodbine twineth as the result of the kick of a mule, I have made a careful check of the records and can find only one man who met disaster as the result of the kick of a rabbit. A New England hunter whose pulse was unstirred by the excellent grouse and woodcock shooting in his neighborhood took every opportunity that offered to get out with a pair of beagles in pursuit of rabbits.

On his last hunt the rabbits were unusually plentiful. He and another enthusiast had hunting coats weighted with bunnies when the beagles jumped another cottontail and began driving it through the thickets. After a few moments the rabbit, conforming to pattern, swung back to the point where it had been jumped only to meet a charge of shot from the alert hunter. It crumpled but as the hunter bent down to pick it up, it gave a convulsive jerk and kicked the hunter in the hand. While the blow was not delivered with enough force to be harmful, the hunter decided to deliver the coup de grace by dropping the butt of the shotgun heavily on the animal’s head.

The blow was a solid one and quieted the bunny but it also had sufficient force to affect the gun which went off. The blast almost decapitated the hunter. One of the first precepts of hunting safety was violated when the gun was employed as a club.

Poems have been written and ballads composed on the gentle nature of the deer, especially the doe, which is reputed to have the nature of a saint and the big brown eyes of a friendly spaniel. Up in Maine where the doe is legal game, a hunter had spent several days in the vain search for a buck with a rack of antlers that wouldn’t go into a medium-sized barrel. In desperation on his last day he levelled his barrel at a big doe, touched the trigger, and watched her drop.

Arriving at his prone quarry, the hunter leaned his rifle against a tree, drew his long hunting knife and bent over it. He grasped one ear to raise the head in order to make a cut at the animal’s throat to bleed it out. At this point the doe, apparently only creased on the skull by the bullet, returned to the living and trampled all over the hunter who, in the excitement, managed to cut himself twice with his own knife. Although he was found almost immediately by another hunter who had heard the shot and came to investigate, he spent a number of weeks in the hospital and lost the sight in one eye as a result of the pointed hoof of this gentle creature.

A painful but not fatal incident took place last season involving a duck. There were two gunners shooting from blinds only 30 yards apart. One of these went to sleep and when the ducks finally swept overhead he was snor- ing peacefully. His companion, however, was alert and although he missed an easy incomer, he did manage to bring down a high passing teal. The duck folded up in the air and dropped with a resounding thud on the head of the man in the adjoining blind who had jumped erect, gun ready, at the sound of his companion’s shots. When the duck struck him, he pulled both triggers of his shotgun and the two charges made a perfect pattern on that part of his companion’s anatomy normally employed in sitting. A local doctor spent two hours with tweezers extracting sixty-odd shot.

Only last spring an ardent varmint shooter armed with a new .222 rifle guaranteed to be lethal to woodchucks up to 300 yards, set forth in search of one of these ferocious creatures. After driving the back country roads for a short time he spotted one feeding on a rocky slope and when the rifle cracked the chuck rolled over.

Eager to see whether the bullet struck at the exact point where it had been aimed, the man climbed the slope and bent over to examine the chuck. At the hunter’s touch the chuck’s muscles contracted involuntarily and one of the sharp teeth sunk in the man’s finger. The hunter’s muscles also contracted in surprise and he took a header down a rocky defile, knocking out all of his front teeth and acquiring a compound fracture of the hip and a concussion. The hunter was not found until the following morning and spent two months in the hospital besides a succession of unhappy sessions in the dental chair.

Take the two enthusiastic squirrel shooters who set out for an oak knoll armed with .22-caliber rifles. The first squirrel was a cinch and also the second. The third, however, proved as deadly as a hungry tiger.

One of the hunters, peering carefully up into the branches of the big oak, caught a fleeting glimpse of bushytail as he scurried to the shelter of a high fork. Pointing out the lofty sanctuary to his companion, he moved around the tree to the opposite side and lined up his sights on the gray bulge. When the rifle cracked the squirrel died but a convulsive jerk sent him clear of the tree.

The shooter’s companion, standing with his own rifle at the ready, jumped when the dead squirrel struck him squarely on the head with a considerable smack. His reaction was transmitted to his index finger which rested on the trigger. He shot and the bullet went straight through the heart of his companion.

In view of these circumstances and others too numerous to mention, be wary on your next hunting trip into the woods lest Mother Nature decide that she has had enough and that it’s about time for you to become the target for wildlife’s revenge. •