Modern Mechanix
Issue: Mar, 1936
Posted in: General
No Comments on When Your Invention Goes to Washington (Mar, 1936)

When Your Invention Goes to Washington (Mar, 1936) 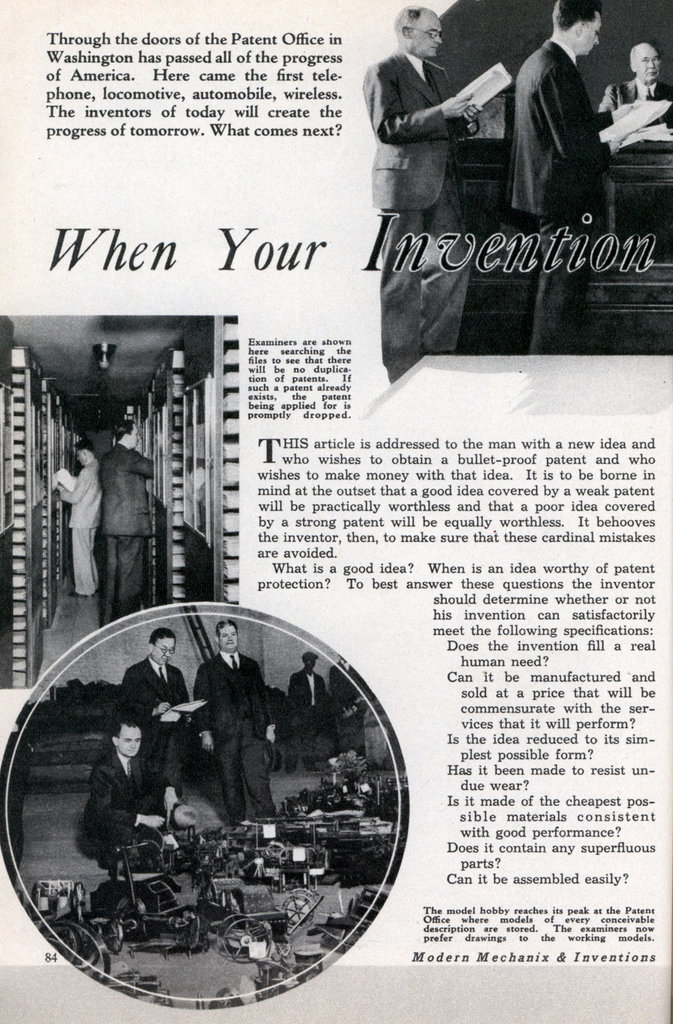 When Your Invention Goes to Washington

Through the doors of the Patent Office in Washington has passed all of the progress of America. Here came the first telephone, locomotive, automobile, wireless. The inventors of today will create the progress of tomorrow. What comes next?

THIS article is addressed to the man with a new idea and who wishes to obtain a bullet-proof patent and who wishes to make money with that idea. It is to be borne in mind at the outset that a good idea covered by a weak patent will be practically worthless and that a poor idea covered by a strong patent will be equally worthless. It behooves the inventor, then, to make sure that these cardinal mistakes are avoided.

What is a good idea? When is an idea worthy of patent protection? To best answer these questions the inventor should determine whether or not his invention can satisfactorily meet the following specifications:

Does the invention fill a real human need? Can it be manufactured and sold at a price that will be commensurate with the services that it will perform? Is the idea reduced to its simplest possible form? Has it been made to resist undue wear? Is it made of the cheapest possible materials consistent with good performance? Does it contain any superfluous parts? Can it be assembled easily?

Can it be manufactured easily and cheaply?

Is the market for it, large enough to justify domestic and foreign patent protection?

How does it compare with articles already on the market?

If these questions are answered soberly and honestly, the inventor is ready to find his patent attorney. Before doing this, however, he must take the precaution of making out a date of conception. To do this he draws out his idea in pen and ink and writes a brief but intelligible description of it on the same piece of paper. The result is taken to a notary public and properly witnessed which will cost twenty-five cents. Uncle Sam has decreed in his Patent Law that the inventor will then have two years from the date on his paper in which to apply for his patent. If the inventor does not act within this period of time, the invention automatically becomes public property and no patent can ever issue covering the invention.

With this important matter properly taken care of, the inventor then fully explains his invention to several members of his family or to several intimate friends. The object of this is that of providing himself with important witnesses if he is called upon in court to prove his right and title to the idea.

The next step is that of selecting the right attorney. There should be no fear of the attorney stealing the inventor’s idea. The writer has never heard of a single instance where an attorney appropriated an invention. He would have to perjure himself if he did and that, once proven, would bring a long prison sentence.

Having selected his attorney, the inventor lays all of his cards on the table. Not the smallest detail is neglected. If a personal visit to the attorney is possible, it is to be advised. The more the attorney knows about the invention, the better the resulting patent will be. It should be remembered at all times that we have patents and PATENTS. There are good, bad and indifferent patents, depending upon how they are worded and written.

When the inventor files his invention with an attorney he must pay the attorney initial fee and he must also remit the first government fee of $30.00. After filing, the patent application is placed in the hands of one of the several hundred Patent Office examiners who specializes along the line to which the patent applies.

Having familiarized himself with the full details of the patent application, the examiner then consults his file of patents to determine whether or not any similar idea has been patented before. If so, the examiner notifies the attorney and that is the end of the matter. The inventor will not be wasting his money in attempting to patent something already covered.

Inventors have the right to prepare and file their own patent applications under the Patent Law but this is to be advised against on the whole. Many a patent has been found invalid after issue, a point which stresses the importance of expert preparation of the patent application.