It’s pretty amazing to read about the early days of television. Building a TV without a Cathode Ray Tube is like building a computer without transistors. You CAN do it, but man is it a pain in the ass. The “primitive” models he describes with their “flickering red images” remind me of the Nintendo Virtual Boy. 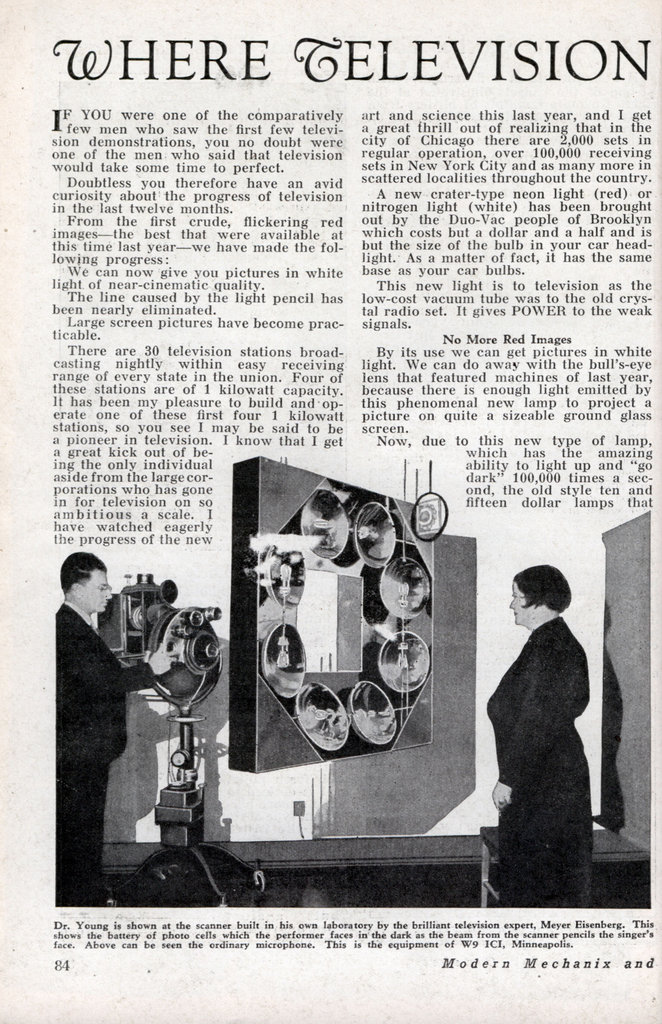 In this article the well known owner of station WDGY and the owner-operator of the largest private television station, W9 ICI, gives you a resume of the past year’s progress in this fascinating new development.

Doubtless you therefore have an avid curiosity about the progress of television in the last twelve months.

From the first crude, flickering red imagesâ€”the best that were available at this time last yearâ€”we have made the following progress:

We can now give you pictures in white light of near-cinematic quality.

The line caused by the light pencil has been nearly eliminated.

There are 30 television stations broadcasting nightly within easy receiving range of every state in the union. Four of these stations are of 1 kilowatt capacity. It has been my pleasure to build and operate one of these first four 1 kilowatt stations, so you see I may be said to be a pioneer in television. I know that I get a great kick out of being the only individual aside from the large corporations who has gone in for television on so ambitious a scale. I have watched eagerly the progress of the new art and science this last year, and I get a great thrill out of realizing that in the city of Chicago there are 2,000 sets in regular operation, over 100,000 receiving sets in New York City and as many more in scattered localities throughout the country.

A new crater-type neon light (red) or nitrogen light (white) has been brought out by the Duo-Vac people of Brooklyn which costs but a dollar and a half and is but the size of the bulb in your car headlight. As a matter of fact, it has the same base as your car bulbs.

This new light is to television as the low-cost vacuum tube was to the old crystal radio set. It gives POWER to the weak signals.

By its use we can get pictures in white light. We can do away with the bull’s-eye lens that featured machines of last year, because there is enough light emitted by this phenomenal new lamp to project a picture on quite a sizeable ground glass screen.

Now, due to this new type of lamp, which has the amazing ability to light up and “go dark” 100,000 times a second, the old style ten and fifteen dollar lamps that

were as bulky as a young watermelon can be thrown away. These new lamps are worlds more efficient, draw but 2-1/2 volts a. c, and cost but a dollar and a half. Thus the cost of the renewable element of the television set has been reduced 1000%, and power has been stepped up nearly as much. That, I claim, is quite a step in progress for a short twelve months.

You see, just as the first radio broadcasting made no progress until low-cost vacuum tube introduction allowed manufacturers to put out a reliable set requiring no special skill in manipulating, so television could scarcely have made any progress from the greatly over-tooted press blare of its baby days until we could announce milestones like those just enumerated: good pictures, white screens, cheaply renewable and efficient white lights.

Just look back and realize that when station KDKA, run by Westinghouse, first began its programs ten years ago receivers were so far below present day standards that to listen to one of these old sets will make you laugh at yourself for ever having expressed wonder at its performance. The first sets had earphones, and you were satisfied. The first loud speaker, Magna-vox, looked like a mushroomed auto horn. Yet what a wonderful thing it was in those days to be able to listen to a radio without a pair of earphones! Marvelous? Yes, and that was only ten years ago.

In its essence, the problem of radio is fairly simple. It consists in principle of merely propagating the single modulated current produced by the voice, broadcasting it over great distances, and picking it up on an aerial somewhere, and then strengthening this signal through amplifying valves to the point where it can be used to actuate a glorified telephone receiver called a loudspeaker.

Television as a problem is infinitely more complex. First the transmitting machine breaks down the picture into an electrical impulse, or set of impulses. These sets of impulses are then broadcast just as sound is broadcast. If there is any sound to accompany the picture it must be broadcast with the picture in the ordinary manner, and synchronized to boot.

This complex signal is sent out and picked up by an aerial at a distant point. Here it is split up again into its component parts, sound and light, to form the talking television image.

The sound problem has never troubled television, for it is a fairly simple single modulated wave. But in order to break down a televised subject into an electrical signal and do it rapidly enough to catch lip movement and eyelash flickers it is necessary to shut the current on and off upwards of 30,000 times a second. This is easily done at the transmitting or pickup end, but the problem has been to catch this signal in the light-emitting half of the television receiver (the part that builds the picture) and at the same time obtain (1) synchronization of image (2) brilliancy (3) absence of pencilling effects and (4) white instead of red images.

With the advent of the crater lamp we can today secure white images of brilliance sufficient to dispense with the bull’s-eye lenses that were on last year’s sets. (They were used to magnify the weak light concentrations of the former small pictures.)

Synchronization is cleared up by the use of the Senabria system of scanning lenses which uses three spirals instead of the old fashioned single helix. See sketch. This new disc “averages” out any aberrations that might be caused by a slight imperfection in one of the old spirals, which because it was the only channel through which the light could pass, would repeat its mistakes with every revolution.

Thus defects in pencilling, or painting of the image have been done away with, or at least put “under control.”

We have found that a mesh screen placed in front of the photoelectric cells will not affect the light received by them, and will eliminate the mixing of noise with the picture (one of the causes of floating images of last year). The screen softens the music and prevents the mirrors, which pick up sight, from vibrating. As these mirrored cells interpret light only, any disturbance of them would register as a disturbance in light at the receiving end.

The matter of synchronization has been eliminated by a secondary wave which is very low in periodicity, and which adjusts the speed of the motor just as a power surge synchronizes an electric clock to keep it rolling away in accurate time.

We can say, therefore, that television is today right where radio broadcasting was when the vacuum tube was introduced. The outstanding development of the last year placing television in this category is the crater type lamp, and the accompanying elimination of most synchronization problems, and the new knowledge of how to keep sound from interfering with the sight channels, together with the “averaging out” principle of the Senabria 3 spiral disc.

This is enabling manufacturers to build receiving machines which give satisfactory operation and which require little skill in operating. That means, friends, that television is now ready to come to the home!