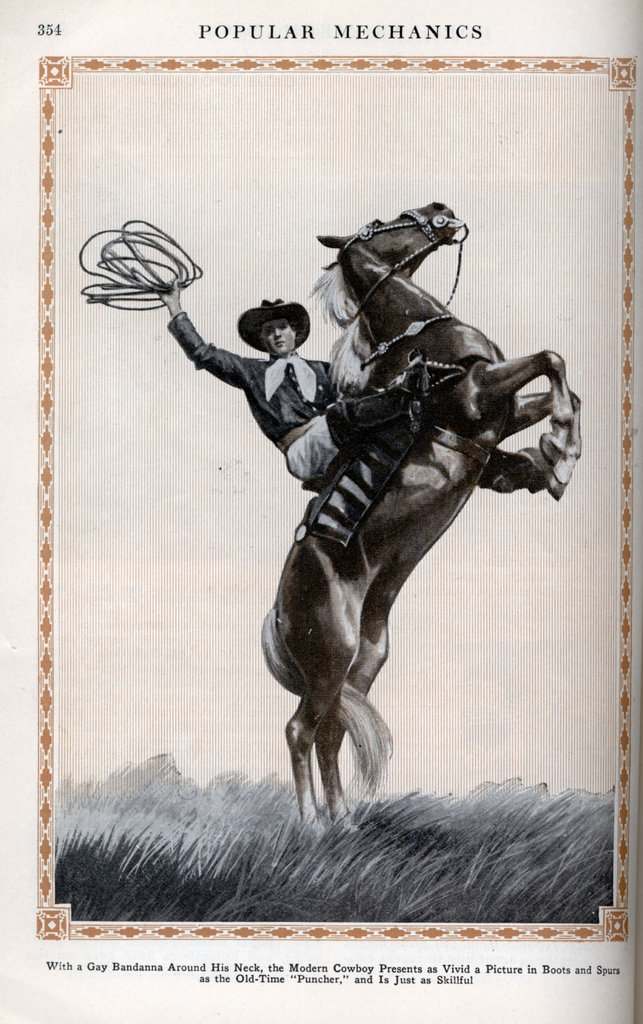 WITH the cutting up of the great ranges, the vivid cowboy with his wide sombrero, gay bandanna, chaps and spurs is fast fading into a dim shadow on the flickering screen of movieland.

Surrounded by towering buildings, clanking switch engines and a wilderness of tracks, the never-old drama of the wild west also is vanishing from one of its last strongholdsâ€”the Chicago stockyards.

Cattle still pour into Packingtown from their peaceful homes on the Texas plains or the prairies of Kansas or Oklahoma, but gone is the time when the 500-acres of pens represented a live part of a far-flung frontier.

Cowboys are still to be seen in and “back-o’-the-yards,” but they are city cowboys, although they can ride a horse just as well as the old timers who used to accompany the cattle to market. Nowadays, the railways feed, water, and exercise the animals so that the shipper does not have to send his cowboys with them. On arrival they are herded into pens by men who, in most cases, have grown up in the district, but who can rope a steer with as much skill as their brothers of the plains.

With the arrival of the cattle, there is a bustle of activity. Bulls bellow, horses neigh, and men shout. Whips crack as the cowboys prod on a lazy or bewildered animal. Here is where the arts and tricks of the cowboys are most needed, for if a cow or bull starts running and gets mixed up with another herd, the whole drove would attempt to follow, resulting in endless confusion. Often, as the animals are being taken from one pen to another, a steer will break loose.

“Close the doors!” is the shout then.

“Go get ‘im, kid!” one of the riders will whisper to his horse, and the animal is down the alley after the fugitive like a flash. When he is within fair distance, the rider twirls a rope and lets it out with a long fling, and it settles over the bull’s neck as neatly as though there was no other place where it possibly could fall.

The horse has been through similar incidents many times before and springs back sharply on its haunches when the bull is lassoed. The force of its sudden halt brings the animal to the ground, and a moment later a sadder but a wiser member of the bovine family is being chaperoned back to its playmates. The thing is done as well as though it was one of a hundred similar occurrences at a round-up on the Miller Brothers’ 101 ranch, down at Marland, Okla.

These city cowboys are as proud of their mounts as the “punchers” of the old days ever were and they take as good care of them. Some of their horses cost $350 or more, while the rest of them are bound to hit the mark somewhere between $100 and $250. The saddles are matters of as much

care to the horsemen, too. A person who rides a great deal always takes an intense pride in his horse and its equipment, just as an experienced motor car driver likes to see his machine looking its best.

The horses are highly trained. They know their work and they do it with a business-like sincerity. If their rider is herding a drove of cows along an alley or from one pen to another, the horse will see that the animals keep walking straight along on their paths. When a gate bars the way, the horse will go up to it and turn sideways, so the rider can unlatch the barrier without dismounting. When the gate is opened, the horse walks through, then turns sideways to it again, so it can be closed. The horses on hay wagons can open and close many of the gates themselves by a nudge of the nose.

After the cattle have been sorted into the pens they are inspected by the buyers of whom there are 300 or 400, all mounted on horses. These men make their bids dependent on market conditions and thousands of dollars will change hands without the signing of a single paper. “Weigh ’em to Swift,” one will say of a $10,000 lot before the scale ticket is made out. From the pens to the coolers where the meat is chilled, takes exactly thirty-five minutes. That is all the time required to transform a steer from a living animal into human food.

With the shipments to the stockyards totaling approximately 16,000,000 head a year, so efficient is the process of dressing and so expert are the workmen, that the capacity of a single department in one of the larger plants is 250 cattle per hour. So perfect is the way of handling bacon, for instance, that it is sliced, weighed and packed in cartons without being touched by hand. All of the coolers where fresh meat is handled are maintained at an even low temperature by circulating very cold brine through pipes suspended from the ceiling or wall. More than 3,000 sides of beef can be stored in one of the coolers where the temperature is kept several degrees above freezing, which chills, but does not freeze the meat. In addition to its own refrigerating apparatus, one of the big plants uses 50,000 tons of natural ice a year, principally in the cooling tanks of freight cars.

Over two-thirds of the beef that supplies the nation with food is raised in the west, but most of it is eaten in the east. About thirty per cent of every animal is waste, 1.000 pounds on the hoof producing only 550 pounds of meat, but little is allowed to go to waste. Even the fine hair in the ears of steers is cut and made into camel’s hair brushes. It takes the hair from the ears of twenty-five steers to produce one pound. Another very valuable by-product is soap, a combination of fats, vegetable oil and caustic. In manufacturing it, the ingredients are mixed together in steam-coil lined kettles three and four stories deep. The capacity of each of these is from ten to twelve carloads of soap.

When sufficiently boiled, the liquid is poured into a molding truck and solidifies into a large cake weighing up to a thousand pounds. This is put on a cutter and sliced into slabs, then into strips and again into cakes. These are wrapped by machinery having a capacity for 45,000 bars a day. ‘Even the wood shipping containers arc nailed with a special device. Wherever possible, laborious handwork has been supplanted by specially designed machines.

When shipped into the Union Stock Yards, livestock is consigned to various commission firms, members of the exchange. The animals usually arrive at night and are unloaded in the morning before the market opens. The weighing is under the supervision of the Union Stock Yard and Transit company, which issues a certificate of weight covering the sale. The scales are tested frequently by city inspectors and the seller is free to check the weights.

The pens making up the yards cover about a square mile. “Packingtown,” composed of some twenty-five plants, occupy about half of this area. The day’s activity begins long before the rest of the city is out of bed with the unloading of the cattle. Spurred on by the quaint cries of the drivers, the animals are sorted, fed and placed in separate pens for the inspection of the mounted buyers.

Among them may be noted men of the range type. These are the brand inspectorsâ€”detectives of the cattle worldâ€”many of them being former cowpunchers. They are employed by the western cattle raisers associations. If a shipper tries to market a steer branded with any except his registered mark, the brand inspector singles out the animal and sees that the lawful owner receives the proceeds of the sale, thus eliminating the cause of many hot disputes.