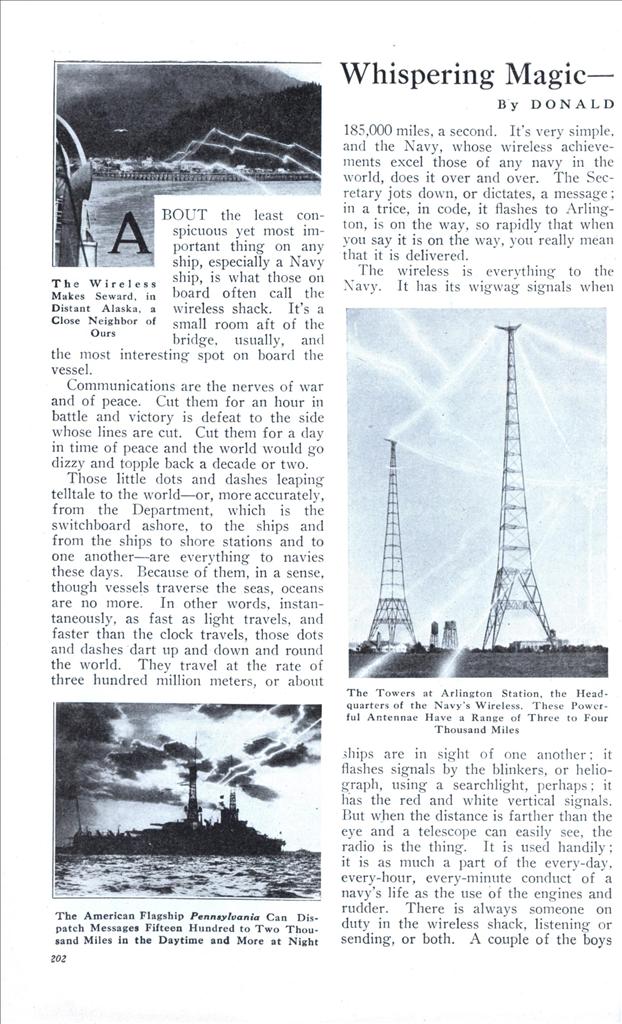 ABOUT the least conspicuous yet most important thing on any ship, especially a Navy ship, is what those on board often call the wireless shack. It’s a small room aft of the bridge, usually, and the most interesting spot on board the vessel.

Communications are the nerves of war and of peace. Cut them for an hour in battle and victory is defeat to the side whose lines are cut. Cut them for a day in time of peace and the world would go dizzy and topple back a decade or two.

Those little dots and dashes leaping telltale to the world—or, more accurately, from the Department, which is the switchboard ashore, to the ships and from the ships to shore stations and to one another—are everything to navies these days. Because of them, in a sense, though vessels traverse the seas, oceans are no more. In other words, instantaneously, as fast as light travels, and faster than the clock travels, those dots and dashes dart up and down and round the world. They travel at the rate of three hundred million meters, or about 185,000 miles, a second. It’s very simple, and the Navy, whose wireless achievements excel those of any navy in the world, does it over and over. The Secretary jots down, or dictates, a message; in a trice, in code, it flashes to Arlington, is on the way, so rapidly that when you say it is on the way, you really mean that it is delivered.

The wireless is everything to the Navy. It has its wigwag signals when ships are in sight of one another; it flashes signals by the blinkers, or heliograph, using a searchlight, perhaps; it has the red and white vertical signals. But when the distance is farther than the eye and a telescope can easily see, the radio is the thing. It is used handily; it is as much a part of the every-day, every-hour, every-minute conduct of a navy’s life as the use of the engines and rudder. There is always someone on duty in the wireless shack, listening or sending, or both. A couple of the boys the Navy trains are on duty, with receivers clamped on ears, fingers on gadgets, other instruments.

And not only do the ships keep in communication among themselves, with the shore, with airplanes when they are overhead, even as the airplanes during the recent bombing maneuvers were in communication with one another, but the radio is being developed to communicate handily with submarines under the water, and efforts are now being made to direct torpedoes at a depth of eighteen feet or so under water. The Navy takes all these events as a part of routine — nothing that radio does these days amazes the Navy.

When the planes were waiting word to fly out to sea to attack the ex-German ships—waiting at Langley Field, 97 miles away; at the Norfolk Navy base, quite as far; and at Quantico, farther — the officer in charge of the events of the day was on the Shawmut, near the ships scheduled to be destroyed. But he might just as well have been at Langley Field, at the Naval Base and at Quantico, in Washington, in New York, simultaneously.

You saw all that from the bridge of the observer’s boat, the Henderson. An invited guest, you stood up there 011 the bridge with the Secretary of the Navy, and you spoke to Washington, you spoke to the Shawmut, you spoke to Langley, to Norfolk, to Quantico, and to the planes flying overhead—that quick; quite a bit more easily than you could have done if you were flying in the cockpit of one of those planes and, despite the even roar of the Liberties, were yelling into the ear of one of the pilots. One day, for instance, when the first submarine took her final plunge, the wireless sent the planes following the first group back to their stations.

Again, when the first attacks had been made on the giant Ostfriesland, we caught a message sent from Langley: “Drop your bombs and return at once to base. Storm coming off the Capes.”

And up above, the pilots of the small ships, and the big, for even the big ones carried only two men, got the message.

Some of them got it direct; others got it from their group commanders.

For all the planes had wireless telephones ; and the commanders of each group had the telegraph. The commanders caught the long-range messages. Then with exactly the same surety and matter-of-fact way that we telephone the corner grocer, he added to his other orders, such as “Move up, No. 3,” “Drop both your bombs, No. 5,” and similar commands, the final word, “Drop your bombs and return to base.” Then you saw them soar away shoreward.

Again, in one instance, the observers were on the ill-fated Ostfriesland and a group of Martin bombers overhead circled like birds waiting to get word to go ahead. The observers were slow. Down came the message, “Unless you can leave the target within fifteen minutes, we must return to base because our gas is running low.” Forthwith, then, in a hurry that a silent Indian, say, of long ago, would have had a hard time to understand, the observers got clear of the Ostfriesland and the sport of kings was on.

There is nothing singular about the equipment on these planes. Most of them have simple receiving sets that an amateur could install. The battery box, coils, tuning coils, detectors, are there, just as they are there on the biggest ships on a vastly larger scale with a vastly larger radio power. The DH4B’s, for instance, which are used as light bombers, have antennae, tuning coils, receiving coils, batteries. The batteries are usually recharged by a generator mounted at a convenient place, usually under the lower wing, with an air propeller—a small one when compared with that which runs the ship —doing the work. A ship has, of course, a motor generator of high power. The motor drives the generator and that makes the current and gives the higher tunes desired for long distance work, with cycles from two hundred and fifty to two thousand meters.

The flagship of the Atlantic Fleet, the Pennsylvania, for instance, has a twenty-five-kilowatt plan which gives her a working radius of from fifteen hundred to two thousand miles in the daytime, and more at night. The Arlington Towers, on the other hand, with more powerful equipment, are good for from three thousand to four thousand miles ordinarily, and’ regularly communicate direct with England, France, Germany, and even with Italy and Honolulu. And if the Department wants to call the Pennsylvania, it can. It sings out noiselessly through the thousands of miles, and the Pennsylvania answers, the message is sent, checked, decoded, and in a trice the Captain 011 his bridge has the message in hand. The call letter of all the Navy vessels begins with “N.” The call letter of the Pennsylvania used to be “NPR.” The message goes out, “HR,” say, meaning Arlington, “is calling NPR. MR calling NPR. HR calling NPR.” Then NPR answers, the message is run through, checked, and back comes the O. K. of the receiving operator.

The codes, incidentally, vary. They are changed without warning. And different codes, with different sending hours, are used for various purposes. Designated time for the daily news service sent out by the Navy Department is set—every morning at breakfast you have the news digest. And in other ways the use of the air is allocated, so that, unless entirely different systems are used, commercial radio has a chance. Certain wave lengths are restricted for special purposes—for distress signals, for instance—and all radio operators are constantly on the lookout for such signals. Again, a ship might send on high power, receiving on low.

To reduce the liability of gumming the air and to simplify things with the fleet, as well as to save work all round, one ship is detailed as a radio guard ship. One day it may be the Pennsylvania, another day the Delaware, and so on. All messages are sent to the guard ship and that ship sends them where they’re to go. That is why, when with the fleet, the landlubber is sometimes puzzled to see how much signaling is constantly going on. day and night, between the various ships. In the evening, for instance, while your ship cruises or is at anchor, off on the horizon the blinkers begin to twinkle, and you know that probably the guard ship is passing on to another ship a message that is intended for it. Most of the shore stations have schedules on which to work—another plan intended to keep the air “orderly.”

There is no confusion. Radio business is systematized exactly like any other part of ship routine. Thus, in the official directions sent out by the Navy Department to commanders in preparation for the bombing experiments on the Iowa, you find the following-: ‘Battleship Force will keep watch on Aircraft Wave on Type TC sets, using four seven six meters at Battleship Group Wave—shifting to this wave after making the call on Aircraft Wave as noted above. Train vessels use Train Wave (538 meters) as Group Wave; destroyers, the Destroyer Wave (1080 meters) ; ships of Air Force, Aircraft Wave; Ohio and ex-Iowa as single ships use CinC Wave.”

You can say it this way: The Navy uses the wireless with far more ease and surety than most of lis use our local telephones—especially when they happen to be party lines. The Navy uses it for all manner of communication purposes; and it uses it in other ways.

It may well be that the most revolutionary changes in naval tactics will yet result from the use of the wireless for offensive purposes as well as for communication. The Navy can steer, fuel and water ships by wireless—it demonstrated that in the case of the Iowa.

You hear, for instance, of experiments being made to send torpedoes clipping along at thirty knots or more eighteen feet or so under water, with a cruising radius of one hundred miles, self-propelled, carrying tons of TNT. And this is only a suggestion—about other plans of the Navy we would rather not tell.

But the supremely fascinating thought is one that is now commonplace in the Navy—that oceans of sea and oceans of air are no more; that in a trice the Navy can throw a message to all American ships all over the world; that ships now thousands of miles apart are, as it were, within hailing distance of one another; that Alaska is neighbor to the Eiffel Tower; Pearl Harbor is neighbor to San Diego, and Berlin to Washington.