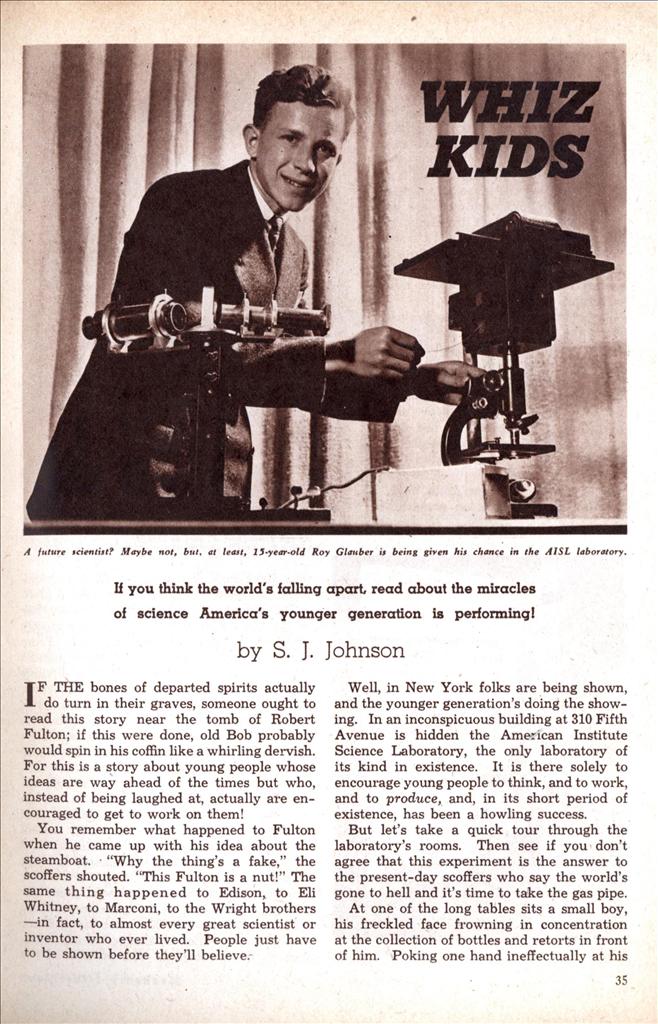 You remember what happened to Fulton when he came up with his idea about the steamboat. “Why the thing’s a fake,” the scoffers shouted. “This Fulton is a nut!” The same thing happened to Edison, to Eli Whitney, to Marconi, to the Wright brothers —in fact, to almost every great scientist or inventor who ever lived. People just have to be shown before they’ll believer Well, in New York folks are being shown, and the younger generation’s doing the showing. In an inconspicuous building at 310 Fifth Avenue is hidden the American Institute Science Laboratory, the only laboratory of its kind in existence. It is there solely to encourage young people to think, and to work, and to produce, and, in its short period of existence, has been a howling success.

But let’s take a quick tour through the laboratory’s rooms. Then see if you don’t agree that this experiment is the answer to the present-day scoffers who say the world’s gone to hell and it’s time to take the gas pipe.

At one of the long tables sits a small boy, his freckled face frowning in concentration at the collection of bottles and retorts in front of him. Poking one hand ineffectually at his mop of hair he is carefully assembling the set-up for his next experiment. This boy is Lionel Goodman, 14; so advanced are the studies he is making of the chemistry of organic dyes that they are being watched with close attention by Du Pont research experts!

Over near one end of the room is a tall lad, putting the finishing touches to the microphotographic camera he has been building. He is Roy Glauber, 15; he will not be in this laboratory much longer, for his work in spectroscopy and both astro- and micro-photography have recently won him a Harvard scholarship.

Inspecting the caged rats ranged along the south wall are three boys and a couple of girls, students of genetics and comparative psychology. A* little away from the others big, deeply-tanned Joe Lovingham, 15, is painstakingly checking over the new-type wind tunnel he has designed and is building for determining the aerodynamic characteristics of model airplanes. Grouped at one end of a table are four other boys, running final tests on an invention they have been working on; RCA Laboratories are said to be much interested in it.

The young scientists talk to one another in low tones every now and then, but mostly they are too absorbed to talk at all. From time to time one or another of them glances anxiously up at the clock, but it is obvious that none of them is in any hurry to leave; after each such glance they seem to settle down to work just a little harder than before.

Yet there is not one of them whom anybody would call a grind. These boys and girls are lively and friendly. One is not surprised to learn that many of them are officers of their classes, that most of them are on one or another of their school teams, that nearly all of them write for their school papers. The reason they are working so hard is simple: they are deeply interested in what they are doing!

It is this interest that has won them the privilege of working in the laboratory. Here school credits count for little or nothing, there are no fees or dues or charges of any kind, there is no curriculum. The purpose of the laboratory is not to teach, but simply and solely to serve as a place where scientifically-minded youngsters can give scope to their own brains and talents and imaginations.

The one qualification needed for admission to the laboratory—aside from its being restricted to boys and girls of high school age— is an idea. Under the sponsorship of the American Institute of the City of New York, with equipment and funds donated by two nationally-known corporations, the laboratory functions as a proving-ground.

Opened only last February, it has already produced three inventions. Four boys— George Prince, Sidney Cooper, Alvin Miller and Walter Kublin—who have been collaborating in the laboratory on studies of electronics, have perfected a device for use in communal emergencies — an approaching hurricane, say, or a bombing attack. Attached to a receiving radio set, it makes possible the turning on of the set at any time by a broadcast signal. RCA Laboratories recently announced the completion of a similar invention, pictured in MI in November, but RCA’s has the important drawback of requiring a continuous flow of current to enable it to work. The one developed by the four lads at the American Institute Science Laboratory uses no current at all!

Another lad, 15-year-old Paul de Wancowicz, has been working out a new type of Diesel injector. Though he can be in the laboratory only on week-ends, because he goes to school in Rhode Island, he has been making such rapid progress with his idea that he expects to be in the market for a patent any day now.

Probably not far behind him will be 17-year-old Martin Rosenberg, who has been busy in the laboratory almost since it opened devising business machines—calculators and tabulators—that can work with microfilm instead of paper. He figures—and can prove— that business organizations could get along with just about one per cent of the filing space they now need if they had such machines.

At the other extreme from such hardheaded practicality is the work of 16-year-old Joshua Lederberg. Young Lederberg is making a series of experimental studies in cytology— the structure and reactions of cells—a highly specialized branch of biology which extends so far out into the realm of pure science that it appears to have no practical use at all. But: “The fundamental structure of all living things is the cell,” says Lederberg. “All questions of function in the organism must be referred to the more fundamental question of cellular structure and cellular function. I hope by a comparison of the action of various reagents upon cellular elements to add to our meager knowledge of cellular structure and reaction.”

And Joshua Lederberg’s long hours at the tables and the microscopes of the American Institute Science Laboratory, in pursuit of ‘ his ambition, have won him scholarships from both Columbia University and the State of New York!

Somewhere between the two extremes is William Diefenbach, 17, who has been training himself in the laboratory in the use of a valuable, but difficult and little-known, technique called Clearing and Staining. By means of it, study of the anatomy of small animals can be greatly facilitated, which is why young Diefenbach, who intends to become a doctor, is interested in it. And he has mastered it. He is the author of a widely-circulated pamphlet about it, and a description of it recently broadcast by him over NBC’s microphones drew such a flood of listener mail that he probably will be asked to repeat it.

And ranging all over the wide fields of science are the others in the laboratory. Jack Zimmer is studying the technique and theory of photography and photographic materials. Shirley Gesser is investigating the effects of various antiseptics on different kinds of bacteria. Wallace Cloud is looking for new ways of making use of industrial waste material and sewage.

To get into the laboratory, each project has had to have the approval of the laboratory’s advisory committee. This is a panel of about a dozen members of the American Institute of the City of New York; representative of the men on it are Preston Bassett, director of research for the Sperry Gyroscope Company; Harvey C. Rentschler, director of research for Westinghouse’s lamp division; and Charles L. Frey, head of the Fleischmann Research Laboratory. And to get by the advisory committee, the project must spring from an idea in which the applicant is not only interested, but on which he is reasonably qualified to work. The idea must be feasible, of course (perpetual-motion machines are out!). But many applicants state that they want to find a cure for cancer, for instance, which, though feasible in itself, is a task requiring qualifications that not one high school student in a million could possibly have. If that one ever comes along, however, the probability is that he will get his chance. The committee can spot every time the individual who really knows what he wants to do and how he wants to do it. To date about one applicant in three has got the committee’s nod of approval; limitations of space; however, are keeping some 40 approved projects on the laboratory’s waiting list.

Peculiarly enough, room for one of these waiting-list projects will probably be made soon by the absence of one of the laboratory’s most outstandingly successful workers—young Lionel Goodman, the freckle-faced boy whose studies of organic dye chemistry Du Pont engineers are watching with such genuine respect. The fantastic trouble with Lionel is that he is entirely self-taught; he has never taken a chemistry course in his life! Consequently, though he is extremely good at complicated organic chemistry, about the far simpler chemistry of inorganic substances he knows almost nothing. It is as though he had been working problems in calculus’ without knowing anything about arithmetic. That he has been able to accomplish anything at all is little short of miraculous, for his lack of knowledge hampers and thwarts him at every turn. Now seems to be the time for him to repair his omission, and bring his lopsided education into balance. Young Lionel will probably leave the laboratory for a year or so for the incongruous purpose of learning something about the fundamentals of a science in which he has already done pioneer work.

Others will be leaving, too, though for less cockeyed reasons. The four electronics students, for example, have just about finished up their invention. So have Martin Rosenberg and Paul de Wancowicz. Roy Glauber, is by no means finished with his studies of modern physics, but he is going away to Harvard on his scholarship. Joshua Lederberg, on his two scholarships, is entering Columbia, where he will be able to carry on his work in the University laboratories and give his place in the AISL to some one who has no other laboratory to work in.

Not only will their places be filled quickly, but the waiting list will probably continue to grow as news of the laboratory spreads around. So far only some 400 students, of the 8,000 eligibles in the New York Metropolitan area, have even applied for admission. There will be a lot more applications than that during the laboratory’s- second year of life.

And for the 22,000 eligibles in other, parts of the country, plans are under way to set up similar laboratories. Baltimore and Cleveland, among other cities, are already working on such plans.

For the boys and girls in the American Institute Science Laboratory have shown quite clearly that a Ph. D. or a beard are not requisites for solid achievement in science. They have shown that their own natural abilities, when given a place to work and equipment to work with, can get results. All that is needed, to begin with, is the Idea.