I love that they made the airport look exactly like a giant version of the plane. Obviously the next step was to make floating airports for flying airports. 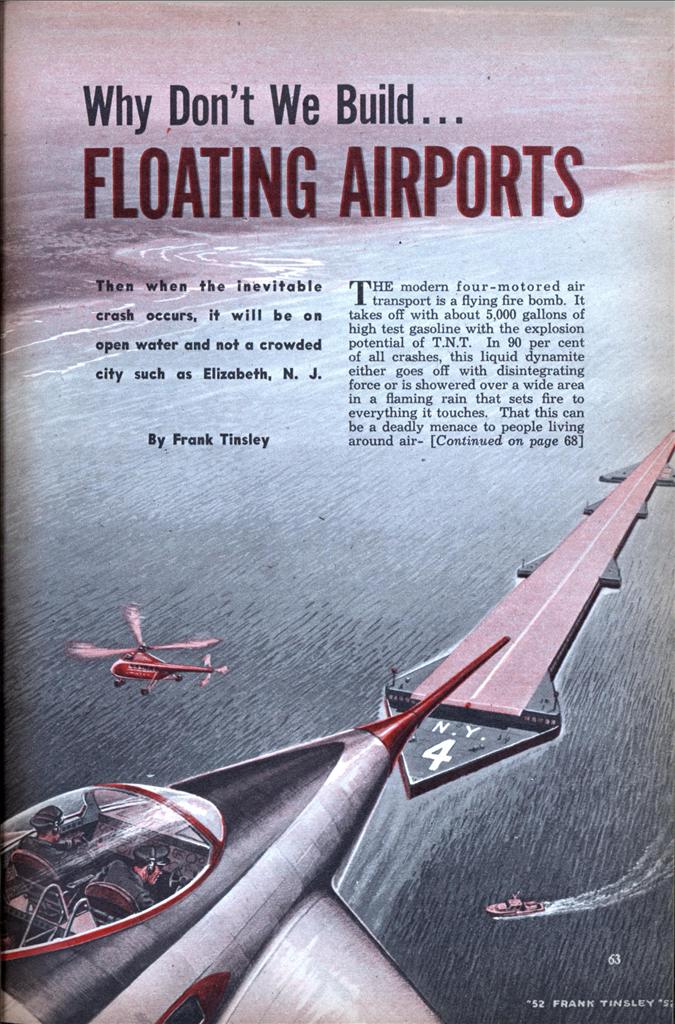 Why Don’t We Build… FLOATING AIRPORTS

Then when the inevitable crash occurs, it will be on open water and not a crowded city such as Elizabeth, N. J.

THE modern four-motored air transport is a flying fire bomb. It takes off with about 5,000 gallons of high test gasoline with the explosion potential of T.N.T. In 90 per cent of all crashes, this liquid dynamite either goes off with disintegrating force or is showered over a wide area in a flaming rain that sets fire to everything it touches. That this can be a deadly menace to people living around air- ports is shown in recent statistics. The Greater New York area alone has suffered five such crack-ups in a period of four months.

Through all the loud shouting about these crashes, it is interesting to note that neither the airport critics nor the airline defenders have come up with one obvious solution. Like New York, most of our great urban centers are adjacent to or surrounded by large bodies of open water. Throughout the United States bays, sounds, lakes and rivers provide a simple and relatively inexpensive answer to the problem. Floating airstrips!

•Does the idea sound ridiculous? It did when first proposed to the Allied Council prior to the Normandy invasion, but the brass was in no position to scoff at anything. Too many “screwy” ideas had already paid off. There were the British schoolboy’s ”degaussing cable” which countered the menace of the Nazi magnetic mine, and balloon-like rubber rafts that had saved many a pilot’s bacon. Who dared to say that the notion of forming flight strips, docks and harbor facilities of interlocking, water-tight tanks might not work?

Work it did! “Operation Lily,” a test seadrome 520 feet long and 60 feet wide, was given a tryout in 1945 at Lamlash, Firth of Clyde. It was formed of six-sided, steel buoyancy cans, each six feet in diameter and 30 inches deep. Naval Swordfish planes, weighing 9,000 pounds, used them without trouble. Anchored in otherwise unusable shallow water, the airstrip was kept headed into the wind by powerful motors and it was a complete success.

Now, Ronald M. Hamilton, Lily’s English designer, proposes a modernization of the plan to provide safe, floating airports for American cities. M.I.’s visualization of one is shown in the accompanying illustrations. Shaped like an arrow always pointed into the wind, the strip consists of a rigid, two-story structure supported by a flotation base of individually mounted watertight tanks.

The main structure resembles an elongated aircraft carrier with an open flight deck above and an enclosed hangar deck below. In the ends of the latter are repair and storage space for planes. Each two-plane compartment is separated from the next by an elevator shaft. Workshops and service facilities are spotted in projecting arrowhead islands along the entire length of the hangar deck.

The islands also contain sub-surface engine rooms in which powerful diesels are mounted to drive water propellers. These operate automatically to keep the airstrip headed into the wind and are governed by a master wind-vane on the forward deck. The incoming plane touches down just inside the after end of the flight deck and is halted by arrestor gear at the first island. A deck handling tractor then couples to the nose-wheel gear and tows the plane to the “down” elevator. Painted tracks on this portion of the deck help keep it in alignment.

Descending to the hangar deck, the plane is towed off the elevator and forward into the “depot” area. Here, completely under cover, the passengers deplane or emplane and the ship is serviced. It is then towed forward to the “up” elevator and ascends to the flight deck again. The tractor then tows it clear of the elevator and the plane’s undercarriage is engaged to the catapult traveler. A variation of the new British steam catapult accelerates slowly and smoothly and whips the plane into the air for the next leg of its flight.

Adjoining the depot area in a large central island are the passenger accommodations. If the traveler wishes to. go directly ashore, he is directed to a door on his right. This leads through a thwartship passage to the taxi waiting room, customs shed, etc. Fast water taxis are tied up to an open boat landing. In another section, helicopter taxis load in a pair of elevator shafts and are then whisked to the flight deck above to take off for various points in the city. Should the traveler find it necessary to wait for another plane, he turns to his left. Here he finds a spacious and comfortable lounge, flanked by an information booth, airline offices, newsstands, etc.

A city like New York could anchor a whole string of these airports in nearby Long Island Sound, the Lower Bay or even in the Hudson River where landing approaches and take-offs could be made over uninhabited stretches of water. Accessibility would be at least as good as that of the present airports and with helicopter taxi service, it would be better. Most of the other great centers of our country are similarly situated. Why don’t we build floating airports to make air travel safer and save our cities? •