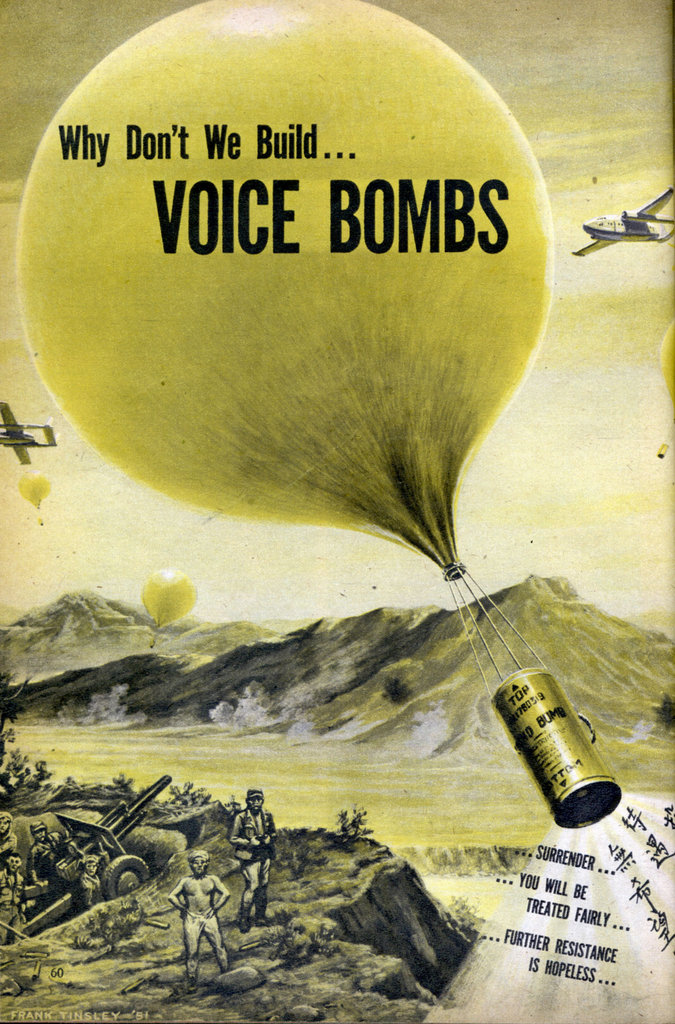 Why Don’t We Build… Voice Bombs

IT is an hour before dawn. Exhausted from long nights and days of continual battle, enemy troops are enjoying a brief respite, sleeping fitfully in their foxholes.

Suddenly the night air is shattered by a voice thundering from above. In a few minutes hiding places are emptied as the bewildered soldiers, startled into alertness, seek to identify this strange, new apparition. They listen as the voice speaks in their native tongue.

“Oppressed citizens of the dictatorship, this is the voice of friends advising you to surrender. Unless you turn on the cruel masters who forced you into a senseless warâ€”unless you lay down the arms you have taken up against usâ€”we will be forced to destroy you with our superior numbers and deadly weapons. Be smartâ€”live! You outnumber your superiors a hundred to oneâ€”obey their treacherous orders no longer! Surrender! You will be treated fairly …”

Some of the troops shoot wildly into the air but relentlessly the voice from nowhere continues its deadly work of creating consternation and terror among the enemy. Many slip quietly off into the darkness to surrender. Still others, badly demoralized, desert their units. Long before sunlight reveals its location, the voice bomb has completed its mission.

“Just science fiction,” you say? Unlike many other radical ideas being proposed to our military planners, the voice bomb is not only a very simple technical project but in another form has already demonstrated its vast potentialities as a psychological warfare weapon.

The famous Man From Mars radio program broadcast by Orson Welles just before the war was an innocent bit of fiction, presented purely as entertainment. Yet it produced widespread panic in the immediate vicinity of a large East Coast city among people who would laugh if you called them ignorant or superstitious. It is a matter of cold record that in some areas farmers locked their women-folk and children in storm cellars and then mounted guard outside, armed with hunting rifles and shotguns, to await the invaders from another planet.

The Army says nearly one-third of the 200,000 Chinese and Korean Communist prisoners were captured through psychological warfare. Brig. Gen. Robert A. Mc-Clure, chief of the Army’s psychological warfare branch, has publicly endorsed voice-from-the-sky techniques. The voice bomb proposed here by Mechanix Illustrated is entirely practical. About 90 per cent of the parts required for it are standard radio components; the other 10 per cent can easily be made to order. The bomb can consist of a compact tape player, a powerful amplifier using the midget tubes and other miniaturized components already in production for military communications equipment, a loudspeaker and a set of cheap, short-life batteries. All the parts can fit neatly into a cardboard cylinder about a foot in diameter and two . feet long, with the loudspeaker mounted in the lower end so that the container itself acts as a fine directional reflector to direct the sound earthward toward its target.

The cylinder can be sustained aloft, after being dropped from a high-flying plane, by a medium-sized balloon. The latter is packed in the upper end of the container and is inflated by compressed gas in cartridges of the kind used for life rafts, Mae Wests, etc. A simple mechanical wind-up timer, adjusted by the bombardier, releases the gas and turns on the equipment when the bomb falls to an altitude of about 1,000 feet above the target.

The whole gadget shouldn’t weigh more than 25 pounds nor cost more than about $50 each in quantity. The heaviest items would be the batteries. However, since they have to last only ten minutes or so, they can be relatively light.

From the electronic standpoint, a voice bomb is a cinch. Highpower voice and music amplifiers have been used for decades. Any one of many existing units needs only to be compressed in size, fitted with battery-type tubes and manufactured cheaply of low-cost components.

Dollar for dollar of cost and effort, a one-night rain of voice bombs will unquestionably deliver more direct information to more people than a week of broadcasting by all our expensive propaganda broadcasting stations, which can count on only a very small actual audience.