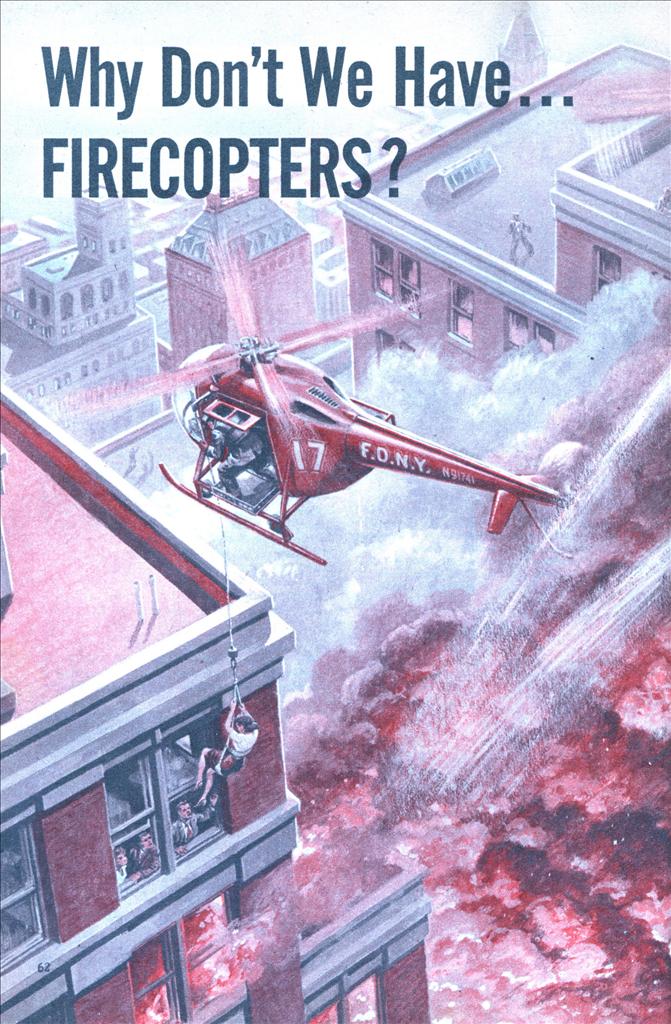 Why Don’t We Have… FIRECOPTERS?

Helicopter fire engines to fight flames from the air and rescue victims trapped on upper floors.

REMEMBER the time back in July 1945 when a fog-befuddled Army bomber crashed into the tower of New York’s Empire State Building? The plane smashed through the outer wall and disintegrated, dumping a ton of high-test gasoline from its upturned tanks. This torrent sloshed through the wrecked offices and ignited with a roar. Blazing gas poured down the elevator shafts, turning them into chimneys of flame and cutting off escape from the tower floors above. Doors, windows and partitions were blown out by the blast. Plane debris, office furniture and mangled bodies were piled into the corners. Before the smoke subsided, several stories were gutted, 13 people incinerated and 25 others badly burned! Only chance and luck saved the workers trapped in the tower because rescue was impossible.

The following year on May 20, a C-45 transport plane repeated the performance, plunging into the 58th floor of the Bank of Manhattan Building in the downtown financial district. The ensuing blaze isolated a corner of the towering skyscraper and wiped out five more unsuspecting office workers.

Both these fires posed tough problems for the big town’s smoke-eaters. The Empire State holocaust wreaked its destruction . some 915 feet above street level, far beyond the reach of the tallest extension ladders and water-tower trucks. The other was equally inaccessible to ground apparatus.

Although all metropolitan buildings above a certain height are protected by built-in hose connections and pumps, the fact remains that it is extremely difficult to fight a blaze from directly above or below in the same building—especially in modern structures with reinforced concrete floors. The only efficient way to fight such a fire is from the outside, at the flame level or just above. In the case of an isolated tower or skyscraper wing, this calls for either a battalion of angels in fire helmets or some sort of skyhook to hold more mundane fire laddies aloft.

The angels are unavailable but the skyhooks, I am happy to report, are definitely in sight. These are in the form of a new type of helicopter dubbed “aerial crane.” One of them, in stripped-down, prototype form, is currently being flight-tested by the Hughes Aircraft Company at Culver City, California. It is a huge, queer looking affair, standing almost three stories high on wide, straddled legs like those of a lumber carrier. Designed to lift artillery, tanks and other heavy items of military equipment across streams and impassable terrain, the finished production models are expected to tip the scales at around 50,000 pounds gross. Driven by jet burners mounted on the tips of the rotor blades, the crane will cruise at 116 mph and have a normal operating range of 200 miles. Up at Palo Alto, Hiller Helicopters has equally large skyhooks on the drawing board and other producers are following suit, for aerial tugboats of this type have great possibilities for civil as well as military use.

Any of these basic, high-lift chassis could be adapted for fire department use. Fitted with small, functionally designed, fire-resistant bodies, they could be readily equipped with electric winches for hoisting hose connections from ground pumpers with booster pumps to step up water pressure and fire-boat type standpipes to direct the streams. Hovering just above the flame level to windward of the rising smoke and gas, they could cope with the most inaccessible blazes. Let’s take a look at such an aerial fire engine and see how it might be put together.

Given the necessary lifting ability, the smaller the helicopter, the more room it would have in which to maneuver amid crowded housetops. We therefore give our machine a four-bladed rotor to reduce its overall diameter as far as possible. This also reduces the risk of engine failure as any of the four ramjet engines mounted on the blade tips can turn the rotor at reduced speed. These “stovepipe” ramjets are without moving parts and produce a maximum of power with a minimum of weight and complexity. Their fuel consumption is admittedly high but considering the short runs they will be called upon to make, this is not a controlling factor. If necessary, they can be refuelled in flight from a ground tank truck. Another advantage of the tip-mounted jets is that they leave the body clear for fire fighting equipment. The present fuselage-mounted engines and heavy mechanical transmissions will be entirely eliminated. Only fuel lines and the rotor control mechanism will be needed.

The rotor is set atop a short, vertical shaft through which fuel is pumped to the blades. A heavy duty generator, driven by the lower end of the shaft, supplies electric current to run the pumps, winch and other accessories. The whole assembly is mounted in a collar structure of conventional design, from which four pyramidal members descend to support the chassis. Control connections are carried forward in the roof of the machine and terminate in an overhead control column hung between the pilots’ seats.

The forward half of the body is covered with large panels of “duo-pane,” fire resistant glass. Cooled air, pumped between the planes, helps insulate the interior which is sealed against smoke and fumes. Large “bay windows” protruding on each side provide ample working room for the standpipe operators and permit a maximum arc of stream. The bays are peaked on top to shed rotor downdraft and give flat, optically correct vision in all directions. Equally good visibility is provided for the pilot and crew chief.

The center section of the body is square with dual landing wheels and long-travel shock absorbers mounted at each of the corners. In the middle of the floor, directly beneath the machine’s center of gravity, is a large hatch through which ground water connections are hoisted and rescue operations conducted. The hoisting cable runs through a heavy block suspended above the hatch and aft to an electric winch. Forward of the hatch is a standard fire department rotary pump. The flame resistant ground-hose, fitted with a specially designed hoisting collar, is drawn up through the hatch and hooked in place.

The crew chief and pilot sit in a forward “greenhouse” completely surrounded by glass. An instrument pylon, set between the seats, is convenient to both, and dual flight controls are provided. Short range radio permits direct voice communication with other ‘copters and the ground commander, and a high intensity floodlight is mounted in the nose for night illumination. Balancing the pilot-house weight is a tail section containing radio equipment and a large, insulated fuel tank. Furthest aft is a small tail rotor. This is mainly for steering and rapid maneuvering, since jet-driven rotors develop only a tiny degree of frictional torque. For safety, it is enclosed in a protective ring.

Well, that’s our aerial fire engine. It is, of course, merely a preliminary sketch—exact details of equipment, arrangement and tactical operation will have to be hammered out on the hard anvil of experience. Item by item, the machine will develop, just as our present magnificent ground apparatus has evolved from the early horse-drawn pumpers, hose carts and ladder trucks. Our smoke-eating helicopters will be teamed up with specialized ground vehicles. Powerful trucks will be necessary to carry the long sections of heavy, armored hose that feed the ‘copters stand-pipes. Tremendous pumps will be required to lift the water aloft to skyscraper heights. Ground and air apparatus will operate as a single unit and will undoubtedly be organized in joint companies with their own street level and roof deck firehouses.

Smaller, more agile whirlygigs, much like the present day Bell and Sikorsky jobs, will be used for rescue work. Hydraulic hoists, harnesses, litters, etc., have all been developed and are immediately available. Rescue crews are now being trained and used in the armed services, gaining invaluable experience. In another year or two, fire rescue by helicopter may become commonplace and we may see a new switch in the comic artist’s gags about the fireman and the beautiful rescuee. Instead of being carried down a ladder, she will be swung aloft by a handsome fire laddie with whirling wings!