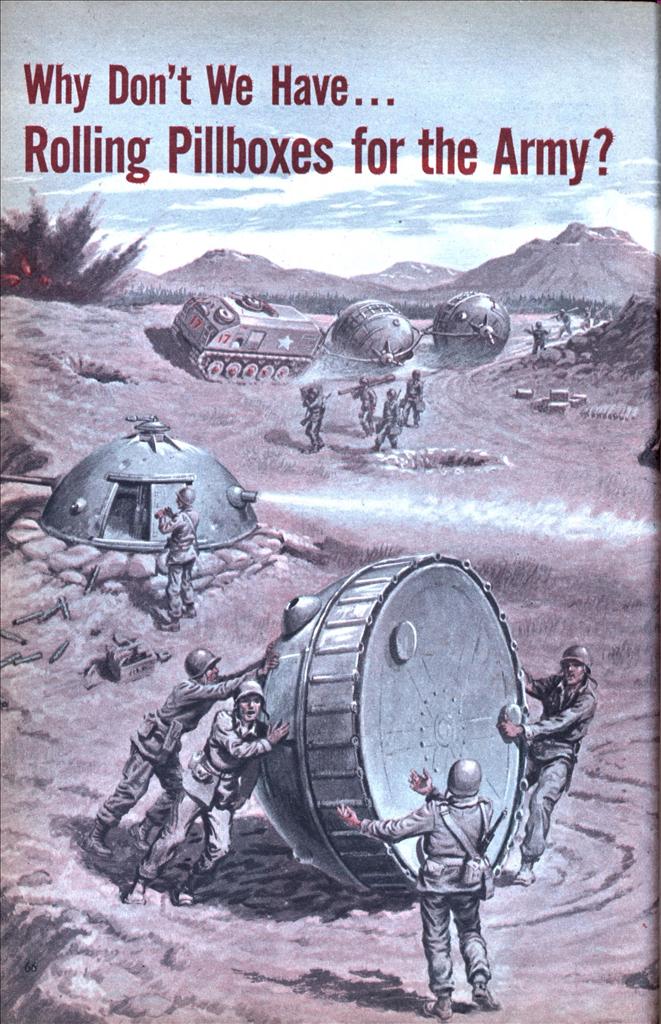 While bulletproof jackets and improved helmets have helped, the only real answer to the steady stream of casualties was to get the men under cover. That meant burrowing like harried moles, deeper and deeper into the stony slopes. Often this protection was made impossible by solid rock or lack of time to consolidate a newly taken position. Where it was possible to dig, the treeless character of the country made the timbering of bombproof shelters a problem. A form of prefabricated bunker was finally adopted using standard-cut lumber shipped clear across the Pacific from the U.S. It was, of course, costly in dollars and a strain on our logistical system. The timbers had to be unloaded at Pusan, forwarded by rail and truck to combat bases and finally brought by Chogie bearers uphill and down to the fighting front. When eventually built at the cost of enormous physical labor, the bunkers offered fair protection against shell fire but proved far from impregnable to troop attack. They could be bombed out. gutted with automatic weapons or set afire.

Something better is obviously needed to meet the Red preponderance in assault manpower—something more in line with our American philosophy of using machines rather than muscles.

A possible solution to the problem has been advanced by Lee Elliott of Bakers-field. California, in his recently patented “Mobile Metal Turrets.” (Patent No. 2,651,973.) His idea, which combines simplicity and practicability, is to couple a pair of armored domes bottom-to-bottom and, by passing an axle through their apexes, tow them on their sides behind a tank or truck. A whole series of these spherical units can thus be hauled in tandem. The domes are fitted with sliding doors and windows which are closed and locked in transit.

While Elliott’s traveling shields are miles ahead of the present timber supported dugouts, his over-simplified design would seem to impose certain tactical difficulties. Being floorless, static domes, they cannot be rotated on a fixed base and thus are im- practical as gun turrets. Beyond loopholes for small-arms fire, no special provision appears to have been made for defense against overrunning attacks. If the armored shell is light enough to be manhandled into position, a determined enemy group could lift one side of the rim far enough to toss in grenades or even tilt it on its back, leaving the defenders completely exposed. Despite these objections, Elliott’s idea of easily transportable, armored domes is basically sound. Design elaboration is all that is needed to eliminate the present weaknesses and turn the turrets into strong, tactical “centers of resistance.”

The accompanying cutaway drawing shows M.I.’s concept of such a design. It consists of a ring-shaped base like the rim of a wheel into which is set a dome-like, rotating turret with a built-in floor. This arrangement greatly improves the road-ability of our “rolling pillboxes.” When coupled for transit, the bases of the two components form a broad, flat tread, cleated for better traction. The cleats are transverse, pipe-like cylinders cast into each base and they contain spring-loaded pins with which the halves are locked together. Mounted on roller bearings, the linked treads revolve independently of their armored domes and function as a wide, well-balanced, central wheel.

Instead of separate axles, built-in trunnions at the apex of each dome act as hubs. These double as conduits and supporting stems for external floodlight reflectors set above them like hub-caps. A pair of V-shaped yokes connects each of the spherical units with its fellow. The open ends clamp around the trunnions and at the bottom of the V a universal coupling attaches to the ‘ adjoining yoke. The V’s are designed to fit together in any position, front or back, either side up. Thus hooked in tandem, two or three sets of turrets can be trundled to positions along the firing line, their crews and armament riding safely in the armored troop carrier “tow car.”

When disconnected and dropped into position, the individual pillbox may be partially dug in or faced with surface sandbags. Three screw jacks are attached to the rim to permit leveling the unit on uneven ground. Camouflage nets, leafy branches, etc., help conceal its precise location. As the armored dome rotates a full 360 degrees on its fixed base, it forms a perfect turret mounting for a variety of armament. Ball-type mounts set in the dome wall are fitted with adaptors to take several sizes of recoilless guns, 40 mm and 20 mm antiaircraft cannon, twin .50-cal. or multiple 30-caI. machine gun combinations. The crew’s personal M-3 “grease guns” are poked through small ball-mountings set around the perimeter to protect the pillbox against close-up attack. A flexible, stainless steel tube, provided for use with recoilless weapons, vents the back firing breech blast through the rear wall of the turret. It is equipped with a spring-loaded nozzle sleeve to permit free elevation and depression of the gun.

Atop the armored dome is an octagonal, fixed-prism periscope, reflecting into a circular, steel mirror .mounted within. This arrangement, somewhat similar to an automobile rear-vision mirror, provides’ a clear view of the surrounding area to the turret crew. Surmounting the periscope ring is a battery-powered floodlight set inside an armored, dish-shaped reflector. This illuminates the area covered by the scope and may be switched on during overrunning night attacks. Atop the reflector is a flame thrower head mounted on trunnions and operated from within the turret. It is capable of 200 degrees elevation and depression and a full 360 degrees traverse. To prevent attackers from swarming over the pillbox, a low pressure, gas-ring type projector surrounds it with a curtain of flame at the touch of a trigger. Pressure and fuel tanks for the system are set in a bin in the center of the floor.

Such rolling pillboxes, invulnerable to anything short of a direct shell hit, should have great tactical value. Quickly set up for action and easily relinked for advance or retreat, they have the readability of a tractor and can be switched from position to position with the celerity of an old-fashioned field artillery battery. They are towable by almost any military vehicle from a jeep on up and are placed in position by their crews.

In Korean-type mass assaults or night attacks, they provide an answer to the problem of overrun positions. They also help reduce the casualties in saturation bombardments and may be the deciding factor in holding or losing a key hill. Even in mountain terrain, impossible to wheeled traffic, the paired pillboxes can be dropped, picked up and supplied by the new, big helicopters. For defense of arctic airfields, bases, etc., against paratroop attack, the igloo-like turrets provide shelter against both foe and elements. Finally, they furnish a high degree of protection against the blast burns of A-bombs.

Molded of cheap, light, bulletproof Fiberglas armor, insulated against heat and cold, the rolling pillbox can boost troop morale and save precious American lives. Why don’t we have them?