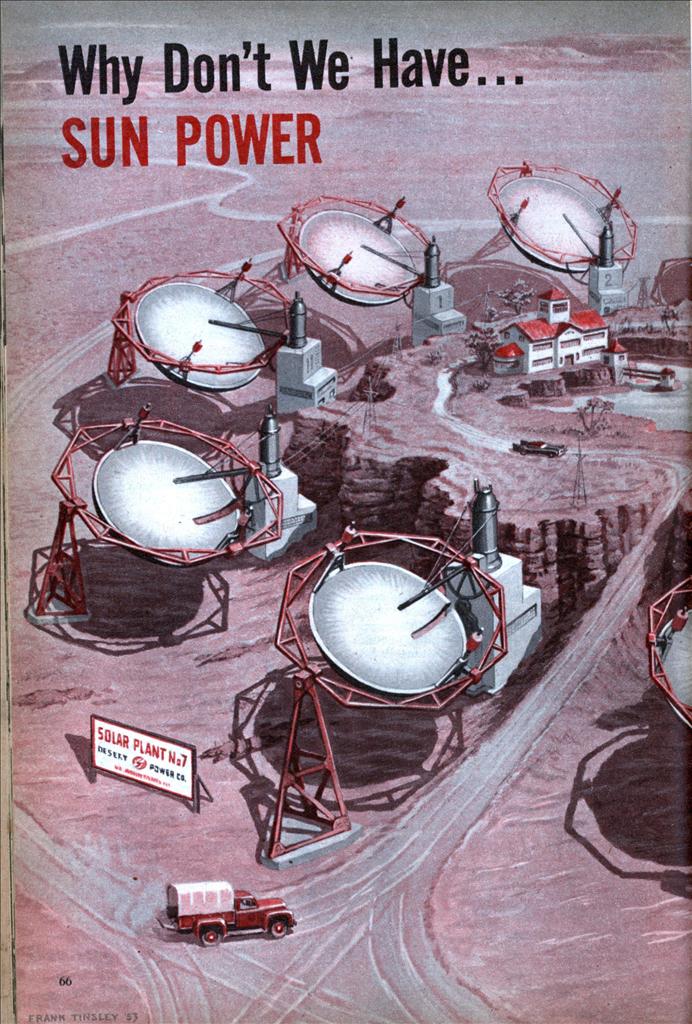 Why Don’t We Have… SUN POWER

Old Sol has more energy than all the atom bombs in the world lumped together. And it’s free … if we can find a way to harness it.

EVER since James Watt built the first steam engine, inventors have been trying to harness the sun’s heat to stoke their boilers because the sun is the mightiest heat source known to man. Every hour, it floods the earth with a deluge of thermal energy equal to 21 billion tons of coal. Every day, the sun pours more potential power upon our land areas than all mankind’s muscle, fuel and working waterfalls have generated since the beginning of time.

The enormous output of solar energy is almost impossible to conceive. The sun is a monster atomic-fusion furnace, some 109 times the diameter of the earth, with a central temperature of 20 million degrees centigrade. It operates like a continuous, slow-burning hydrogen bomb generating half a million billion billion horsepower per second. As the sun is a sphere, this power radiates in all directions. Most of it flows out through interstellar space with only about half a billionth part of the total being intercepted by the earth. Of this tiny fraction, 50 per cent is reflected back into space by our atmosphere. The rest, partly reflected, partly absorbed by the earth’s surface and plant life, is potent enough to maintain our globe at a livable temperature. If this segment of solar energy seems small, it is only by comparison for it has been estimated that if all our remaining fuel—coal, oil, wood, natural gas, etc., plus the entire supply of fissionable uranium— were set ablaze in one gigantic bonfire, it could match the intensity of the earth’s solar ration for less than three days!

Modern experiments to harness this power have been many. The Russians claim to have generated steam at 875° Fahrenheit with rolled glass mirrors set in concrete. Later they reported building huge solar reflectors of cheap glass with plywood backing. These are said to have developed pressures of 30 pounds per square inch at 365°. They were designed for use in central Asia where the periods of brightest sunlight coincided with those of greatest power demand, In practice, they are reputed to have proven the practicability of generating steam on an industrial scale at any season of the year.

In the village of Mont Louis in the French Pyrenees, Felix Trombe, a solar engine designer, has harnessed the sun’s energy in the form of pure, directed heat which can melt or vaporize substances without contaminating them with chemical alloys or impurities. Trombe picks up the rays with a great, 40-foot square, flat mirror which turns automatically to face the sun. The rays are reflected into an equally large, parabolic mirror which acts as a gigantic burning glass, concentrating the heat into a focal spot which has reached temperatures as high as 4,500° Fahrenheit!

By far the biggest authenticated contraption of its kind, the Mont Louis reflector can melt 130 pounds of iron an hour and has actually burned holes in aluminum oxide—the fire resistant material used to line electric furnaces! In addition to important experimental work, Trombe’s pure solar plant will manufacture hard-to-heat ceramics out of zirconium, thorium and aluminum oxides. These will be used to coat mechanical parts subjected to intense heats, such as jet engine turbine blades, etc.

In America, Dr. Charles G. Abbot of the Smithsonian Institution, has long been the principal exponent of solar power plants. These have been of various types. Initial experiments were conducted with single and multiple mirrors of rectangular shape, curved like sections of a cylinder to concentrate the sun’s rays along the length of a tubular boiler.. Later, parabolic mirrors were tested and showed twice the heat gathering efficiency of the early types. Computations and small scale working models indicate that 20 to 25 per cent of the solar energy intercepted can be transformed into mechanical power. At this rate, 750 square miles of our southwestern desert could furnish all the electric power now required for heat, light, transportation and industrial purposes in the United States!

Abbot’s latest model incorporates a flash boiler in which water can be converted into steam within a few seconds. The parabolic mirror is mounted in gimbals so that it can turn and tilt to follow any course of the sun. Its movements are controlled by a clockwork of the type long perfected by astronomers. It automatically compensates for changes in the sun’s path over the hours, days and seasons. The mirror is assembled of concave sections of duralumin, coated with a high reflection material such as rhodium. It is mounted on trunnions and balanced with counter-weights so that very little power is required to tilt it.

The heat collection system consists of a pair of vacuum insulated, concentric tubes ending in a small, globular collector located above the center of the mirror at its focal point. A highly efficient, heat absorbing liquid such as one of the chlorinated dyphenols, is gravity circulated through the tubes. It loads up with concentrated solar heat at the collector end and carries it through the tubes to a heat exchanger mounted in the supporting structure. Here the heat is transmitted to water, changing it into steam. This is piped to a turbine which drives an electric generator. Thus, the suns rays are converted from direct heat to mechanical power and finally into electric current.

The main problem involved is the old bugbear of mirror cost. Dr. Abbot has whittled this down somewhat by building up his 50-foot paraboloid of comparatively small segments. These, to be absolutely true and uniform, must be turned out on a mammoth press using large, expensive dies. Then the mirror must be assembled on a carefully fabricated frame requiring special jigs to. accurately maintain its curvatures.

As thousands of such sun plants are contemplated, assembly line production will cut costs somewhat. Nevertheless the expense of mirror manufacture and transportation will be great, bringing the total plant investment to an uncomfortably high figure.

It occurs to me that the new Fiberglas techniques may hold an answer to this expense problem. Products with compound curvatures such as car bodies and boat hulls up to 40-odd feet in length have been cold moulded by this process. The resulting shells are light, rigid, strong as steel and impervious to weather. The moulds, also of Fiberglas, are easily produced from a plaster model. The whole production set-up can be moved from one desert building site to another,’ turning out enough mirrors for a battery of sun plants at each stand. Transportation troubles would thus be minimized.

The one-piece mirror shells, taken off an inverted male mould, would be extremely thin in section for maximum lightness. They would be reinforced on the under side by a network of moulded-on stiffeners of the same material. The resulting parabolic “dish” would combine featherweight with great strength and rigidity. The concave inside surface, sprayed with a suitable reflecting coat, would function as well as any glass or metal mirror. Such a design could well lick the present mirror headache.

The ideal solar power plant would consist of a battery of Abbot units set in a ring around a low, circular butte. Such plants could be spotted in sections of our 150,000 square mile desert area, most convenient for power transmission. They could serve industrial and agricultural communities all the way from Texas to California, complementing wind and water power plants further north. The individual plant would be almost self supporting. The center of the butte could be excavated for a reservoir, water to be piped in or pumped from drilled wells. Around this elevated pond are the necessary buildings— a bungalow for the resident engineer, storage sheds and a powerhouse for collecting and transmitting the current—all surrounded by trees and gardens.

This type of plant is extremely cheap to run. Almost automatic in operation, it requires but a single resident engineer for inspection and adjustment. Any large repairs would be handled by a central maintenance crew equipped to service a number of contiguous plants. In emergencies it could use the helicopters normally used for power line inspection. Professor H. C. Hottel of the Massachusetts Institute of Technology estimates that as much as 440,000 horsepower hours per acre can be produced in a year by such desert sun plants.

The American public has been largely oversold on the possibilities of atomic power generation. As the technical difficulties and radiation dangers of nuclear power plants gradually come to light, even the experts are beginning to cool off. Solar power on the other hand presents no such headaches. Its development problems are comparatively simple and its costs but a fraction of the tremendous atomic outlays. Moreover, the world’s supply of usable uranium is definitely limited. Sunlight, however, will last as long as our solar system. It will still be with us long after our last uranium has fissed.

As former Secretary of the Interior, Julius A. Krug remarked, “Congress would do well to appropriate a few hundred million dollars to find new sources of energy.” High on the list he placed the development of power by solar heat.