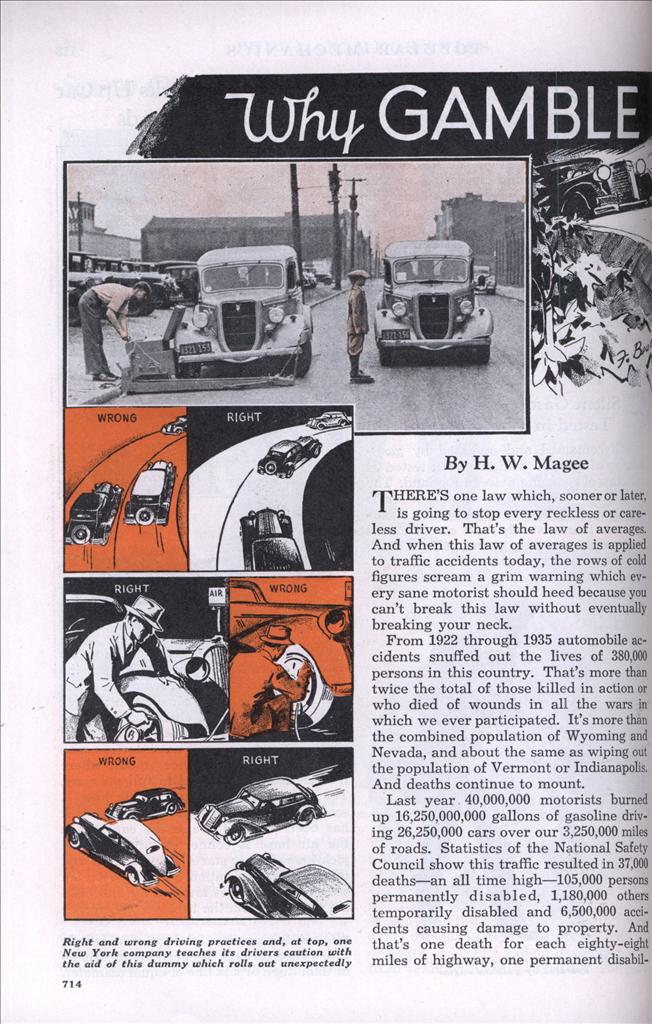 Why GAMBLE with DEATH?

THERE’S one law which, sooner or later, is going to stop every reckless or careless driver. That’s the law of averages. And when this law of averages is applied to traffic accidents today, the rows of cold figures scream a grim warning which every sane motorist should heed because you can’t break this law without eventually breaking your neck.

From 1922 through 1935 automobile accidents snuffed out the lives of 380,000 persons in this country. That’s more than twice the total of those killed in action or who died of wounds in all the wars in which we ever participated. It’s more than the combined population of Wyoming and Nevada, and about the same as wiping out the population of Vermont or Indianapolis. And deaths continue to mount.

Last year 40,000,000 motorists burned up 16,250,000,000 gallons of gasoline driving 26,250,000 cars over our 3,250,000 miles of roads. Statistics of the National Safety Council show this traffic resulted in 37,000 deaths—an all time high—105,000 persons permanently disabled, 1,180,000 others temporarily disabled and 6,500,000 accidents causing damage to property. And that’s one death for each eighty-eight miles of highway, one permanent disability for each thirty-one miles, one temporary disability for every three miles and a property damage accident for each half mile. Truly death and destruction stalk our highways.

There’s just one message in all these figures—be careful or be killed. But how do these statistics concern you directly? You consider yourself a careful driver, you’ve never killed anyone, never injured anyone, perhaps never dented a fender. Well, that’s where the law of averages comes in. If the present traffic accident rate continues, one out of every twenty persons in this country will be injured or killed in an automobile accident within five years. And that includes you!

Just jot down your name, then add the names of nineteen relatives and friends. One of you will be killed or injured in a traffic smash-up by 1941 by the law of averages. Here’s another way of looking at it. Write down the names of three children in your neighborhood. Two of the three are sure—not likely, but sure—to be injured in auto accidents during their lifetimes if the present rate continues. Or perhaps you have a sixteen-year-old boy. If he looks forward to a lifetime of driving and is exposed both to driving and pedestrian hazards, your son also is certain, by the law of averages, to be hurt in a traffic accident unless the present rate is reduced.

Not a very cheerful outlook, is it? Now let’s compute the economic loss in addition to human lives wasted. Last year we spent about $2,638,-000,000 for new cars and trucks. During the same period accidents cost us more than $1,600,000,000 in wage losses, doctor and hospital bills, insurance overhead and property damage. Thus for each $1,000 spent for new cars in 1935, another $600 went for accidents. Most of that was money wasted. Some of it was your money—paid in high insurance rates if for nothing else. Project this loss over the next ten years and you have a figure approximating half the national debt.

So there you are. Automobile accidents are costing you money whether you have accidents or not, and by the law of averages you or someone close to you will be killed or injured in one within five years if present conditions continue.

“So what?” you say. “I’m a very careful driver. A lot of other fellows are causing all this. They ought to be ruled off the highways. But why pick on me?”

Well, you’ll be just as dead if the “other fellow” kills you as if you do the job yourself. And are you careful every minute you’re behind the wheel, or do you think you are? For every accident last year which went to pile up the grim total of death and destruction, there were literally hundreds of near accidents—situations when something almost happened but didn’t. Every driver has had these narrow escapes -some call them “lucky breaks.” Now accidents don’t just happen; someone causes them. It’s human to blame the “other fellow” but the other chap can’t always be in the wrong. You’ve got to accept part of the responsibility, at least part of the time.

Who had all those thousands of accidents last year? Some were physically defective, some didn’t know how to drive. But the great majority were competent drivers who had acquired careless habits. They went too fast, passed on hills and curves, sped through intersections, jumped the lights and did a thousand and one other foolish things until the law of averages caught up with them. They didn’t actually want to have an accident, but neither did they want sufficiently not to have one.

And that’s the secret of staying out of trouble on the highways today. You’ve got to prevent the accident before it happens. And the best way to do that is to check up im mediately on your driving habits. If every one of 40,000,000 drivers discarded all careless and dangerous practices today, the deaths, injuries, property damage— and insurance rates—would drop tomorrow. If you’ll overhaul your own driving practices, you’ll go far toward avoiding an accident.

First, let’s consider speed. Modern cars do seventy, eighty or even ninety miles an hour with ease. But can your brain go ninety miles an hour, or even sixty? Cars and highways are faster, but your reaction time isn’t. And it still takes time to think. It takes about three-fourths of a second on an average. So from the time you see the heifer until the time you do something about it, your car travels about fifty-five feet if you’re doing fifty miles an hour. Then after you get your foot on the brake, you need nearly 200 feet more to stop— unless you have poor brakes.

Did you ever do sixty at night on a good stretch? The chances are you were driving “blind” and didn’t even know it. With good brakes and good road conditions, you need about 330 feet to stop at sixty miles per hour. Now if your lights enable you to see only 200 feet, your stopping point at any moment is almost 150 feet beyond the distance you can see ahead. You would even be out-driving 300-foot head lamps at that speed.

Here’s another startling conception of sixty miles an hour. At that speed your car has enough momentum to travel 120 feet straight up if it could “take off.” So when you do sixty you might as well be 120 feet in the air if you hit something.

Just another way of saying that hitting a stationary object at sixty creates the same impact force as though the car were to drop from the top of a twelve-story building.

The higher the speed, the worse the accident. One accident in eleven is fatal at fifty miles per hour and above. At speeds of twenty and under, only one accident in sixty-one is fatal. But just driving under fifty isn’t any insurance against accidents. Most of them occur at speeds under that figure. It’s quite easy to determine the type of accident you are most likely to have. Just study the kind most drivers had last year.

So here’s a tip that will reduce your chance of killing someone nearly fifty per cent—always be on the lookout for pedestrians. Nearly half of lost year’s traffic fatalities were traveling afoot. The ratio of injuries to deaths is twenty to one for pedestrian accidents. Nearly 7,000 pedestrians jaywalked to their death last year but, on the other hand, mistakes by drivers accounted for about two out of every three accidents of every type. If you’re in the habit of letting pedestrians look out for themselves, you stand an excellent chance of killing someone. Incidentally, school children, trained to watch traffic, made a better safety record than adults last year.

Car defects cause, or help cause, at least fifteen per cent of all accidents, it is estimated, so here’s another tip. You minimize your chances of killing or being killed by proper maintenance. Poor brakes and glaring lights are the mechanical defects blamed for most such accidents.

One serious mistake in driving may be your last, so don’t be lulled into a sense of security just because you’re on the open road. Since 1930 traffic deaths for large cities have been declining while deaths on the open road have been climbing. And don’t think you are careful just because you exercise caution in turning. Nine out of ten vehicles involved in fatal accidents last year were going straight ahead. Even at intersections, most accidents involve vehicles going straight ahead. If you cross the center line occasionally, or pass on a hill or blind curve, you should be interested to learn that twenty-six per cent of all fatal accidents and fifty-eight per cent of the non-fatal ones last year occurred in collisions between automobiles. Passing on a hill or driving on the wrong side is an excellent preliminary to a collision.

If you’re in the habit of looking after you get on the railroad track instead of before, you’re headed for the same fate that overtook six per cent of those killed last year and five per cent of the injured. They were killed and hurt as the result of automobiles hitting or being hit by vehicles other than automobiles.

Ever take a curve too fast and find yourself struggling for control? If your 4,000 pound car hits a curve of 100 feet radius at thirty miles per hour there’s a force of 2,400 pounds trying to pull you into the ditch. That’s centrifugal force. Twelve per cent of last year’s fatalities and six per cent of the injuries were caused by accidents involving no collisions with anything. Which might prove that anyone can round a corner on two wheels—once. And this brings up skidding. You can’t blame a skid on the “other fellow.” Twelve per cent of all rural accidents in Ohio last year were caused by skids. But when roads were wet, snowy or icy, one-fourth the accidents involved skidding. The lesson seems obvious—but remember also that four out of five traffic accidents occur on dry roads and in clear weather, so don’t get careless just because the road is dry.

Night accidents are more serious than daytime ones and, on a mileage basis, the accident rate at night is higher. Traffic, accidents and fatalities reach their peak about five in the evening, and their low about three in the morning. Also there are fewer accidents on Tuesday than any other day in the week, and more on Saturdays and Sundays. So in theory, the safest time to drive is about three o’clock of a Tuesday morning.

But don’t take a chance, even on Tuesdays, because the law of averages will beat you if you keep it up. Why gamble with death when you know death is going to win eventually?