Apparently even in 1945 the stereotype about how the Japanese just copy from everyone and have no originality was in full force. 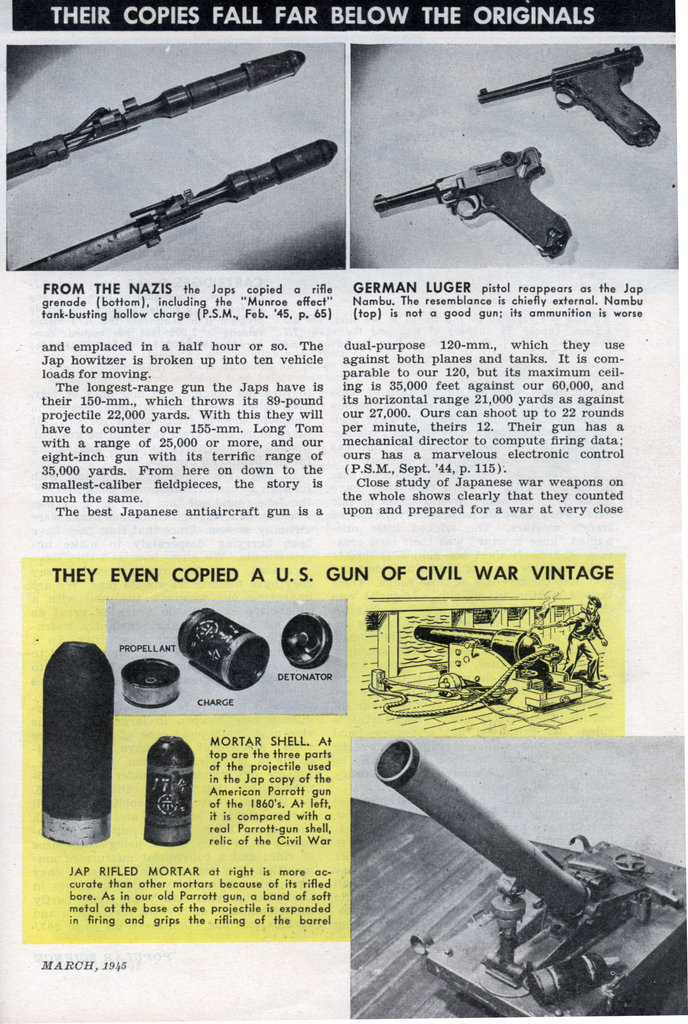 Why Japan Can’t Win on Land

The Nips are doomed when they meet us in the open. Their tanks and guns can’t match ours.

WHEN MacArthur’s invading infantrymen broke away from the Lingayen beachheads into the valleys of central Luzon, they started a new and decisive phase of the land war in the Pacific. Now, at last, we had the Japs in the open where we could get at them with the weight and power of our superior armor and guns. We knew what the result would be, from a cold-blooded comparison of their weapons with ours. We have captured Japanese war equipment of all kinds; our ordnance experts have studied it and found it second-rate, or worse.

The Japs are the world’s most brazen copycats. Nobody knows this better than our specialists whose duty it is to examine and test their weapons of war. These experts will also tell you that the Japs are not even good at copying. However assiduously they attempt to duplicate a good weapon of another power, they never succeed in equaling it in quality and performance. In outward appearance their version may look like an exact copy of the original, but closer examination reveals crude workmanship and a low standard of dimension tolerances. Actual testing shows up the defects to be expected from such workmanship and engineering.

So we know now that our guns outperform and outrange theirs by a wide margin in every category, from shoulder rifles to the biggest field guns. We know that our tanks outclass theirs to such an extent that there is hardly a basis for comparison. All our machinery of war is more reliable because it is well made to close tolerances. Our ammunition is more powerful, more uniform, and more accurate.

All of this will be spelled out in piled-up Jap bodies and smashed equipment when the final battles of World War II are fought on the expansive terrain of Chinaâ€” as they will be, according to our military experts. Up to now, our all-around superiority in weapons has not been fully demonstrated because the Japs have called all the shots. The Japs started the war, and in the first stages they determined where it would be foughtâ€”in the jungles. For such warfare they were comparatively well armed. Their shorter-ranged rifles and guns, their many mortars and howitzers were well adapted to this type of in-fighting. They have given us a lot of punishment in the clinches, but now we have learned how to beat them even at their own game. Now we are forcing the fight. We are driving them slowly but surely out of the terrain they chose. In the final rounds they will have to trade punches with us in the center of the ring.

With what can they stop our mighty tanks when that time comes? Their biggest tank gun is a feeble 57-mm. affair of relatively short range and low hitting power. It is carried by their so-called medium tank, which looks like a relic from World War I. Its armor is less than half as thick as that of our light and medium tanks. Such armor and such guns will be faced by our high-velocity 75’s, 90’s, 105’s and such. Our Sherman tanks, with their 75-mm. guns, smashed their tanks to pieces on Saipan and Peleliu- a small sample of what will happen if the Japs try to meet us in a major tank battle.

Up to now, the Japs have not shown up with bazookas, though this is a weapon which ought to be easily duplicated. It is considered likely that they will shortly be equipped with rocket launchers of this type, for they have already copied the explosive war head used by us and by the Germans. They are using it on their rifle grenades and cluster bombs dropped from planes. But the bazooka is also a short-range weapon, and they may find it hard to get close enough to use it against our tanks.

With what will the Japs counter our field artilleryâ€”the big guns that punched holes in the Siegfried line? They have fieldpieces in almost every category, but inferior ones. Their biggest is a 240-mm. howitzer, which has a maximum range of 11,000 yards. How will it stand up against our 240-mm. howitzer with a maximum range of 25,000 yards? Our 240 is an extremely mobile big gun and can be moved on only two vehicles at 30 miles an hour and emplaced in a half hour or so. The Jap howitzer is broken up into ten vehicle loads for moving.

The longest-range gun the Japs have is their 150-mm., which throws its 89-pound projectile 22,000 yards. With this they will have to counter our 155-mm. Long Tom with a range of 25,000 or more, and our eight-inch gun with its terrific range of 35,000 yards. From here on down to the smallest-caliber fieldpieces, the story is much the same.

Close study of Japanese war weapons on the whole shows clearly that they counted upon and prepared for a war at very close range. They went in for mortars of wide variety, and these have been murderous weapons in the kind of war they have been making all through the Pacific islands. The graves of many American Marines and soldiers bear testimony to that.

So great has been the Japanese preoccupation with mortars that they have actually shown some inventiveness in this field. They have at least nine varieties of trench mortars. The wicked little misnamed “knee mortar” was their own creation. Extremely light and simple, it throws a considerable load of death and destruction over the treetops at close range. Their largest mortar, the 90-mm. (3.5-inch) was the first produced with a recoil mechanism to steady it. In one mortar, the Japs devised a crude but effective method of controlling the range. This one has a slot near the base of the tube, which is opened and closed by varying degrees to permit escape of pressure. In still another, the Japs are making use of an American Civil War invention, the Parrott gun. This mortar is rifled. Its projectile has a copper band near the base which is expanded by the propelling charge so that it follows the rifling and thus obtains greater accuracy than is possible with a smoothbore.

Granting that the captured Japanese equipment is not the best they have now, or will have to use against us in the battles to come, what chance do they have to catch up with us in the armament race? A very slim one indeed, according to our intelligence reports. We know pretty well what they are doing, or trying to do, in this respect. Their greatly inferior productive capacity prevents their retooling to turn out complicated machines of war, even when they have in their possession complete models from which to copy. It takes more time than they will be granted. Instead of catching up, they are falling farther behind all the time.

In their four months of fighting with Russian forces in Manchuria, back in 1939, the Japs found out that their artillery was woefully deficient and that their tanks were virtually useless. Since that time they have been hurrying desperately to make improvements. We know how well they have succeeded, and our ordnance experts say they have nothing we should fear. We are improving our weapons, too, and with a productive capacity 30 times as great as that of Japan, we are constantly widening the margin of our superiority. In a war to the death, the imitator is bound to lose, for he will never have a chance to copy the last great weapon that strikes him down.

How difficult it is for the Japs to produce a new weapon in large numbers is shown in the typical case of their service rifles. Since 1939 they have been substituting a larger-caliber gun, the 7.7-mm., for the old standard shoulder gun of 6.5-mm. caliber, that is, a .30 caliber for a .25. At this late date, their soldiers are still partly equipped with one and partly with the other. Even single companies of infantry have been found using both sizes of rifles and a consequent mixture of ammunition. On top of this confusion, they have three different types of cartridges in the 7.7-mm. size, which are only partly interchangeable among the larger rifle and various machine guns. The Japs are smart enough to realize this situation gives them a terrific supply problem, but their lack of productive capacity in their factories evidently has made it impossible for them to correct it in time.

Before this war is over, the Japs may have their entire army supplied with the larger, improved rifle. Even so, they will still be outclassed in that category, for their newest rifle is not as good as our old Springfieldâ€”to say nothing of the Garand. They have finally achieved a muzzle velocity of 2,300 feet per second, as against 2,800 for the Springfield and Garand. Their effective range is now only 600 yards, as against our 1,000. In other words, the service rifle with which the Japs will end this war is not as good as the one with which we ended the last one.

It is much the same story throughout the whole comparative picture of war weapons. If the Japs could not copy as simple a thing as a shoulder rifle and produce one equal to the original, given all these years to do it, what chance have they to equal the extremely complicated machines with which we are fighting the war?

There are various explanations of Japanese backwardness among our experts who are well informed about the Japs and their production methods. Some think it is due primarily to a lack of engineering brains, some to a dearth of skilled mechanics, some to their limited factory capacity. It may be a combination of all these factors, and others besides. Whatever it is, the end result is the sameâ€”a hopeless tardiness in producing the weapons for fighting such a war as this, a fatal lack of adequate armor with which to meet us in the final showdown.

No doubt the Japanese war lords are aware that their finish will come quickly if and when we get into China with such force and equipment as we now have in Europe. Estimates in Washington differ widely as to how long it will take us to achieve such a landing. The Japs may be expected to stake everything upon preventing us from making a landing in force, and that includes their whole navy and all their air forces, to the last ship and plane.