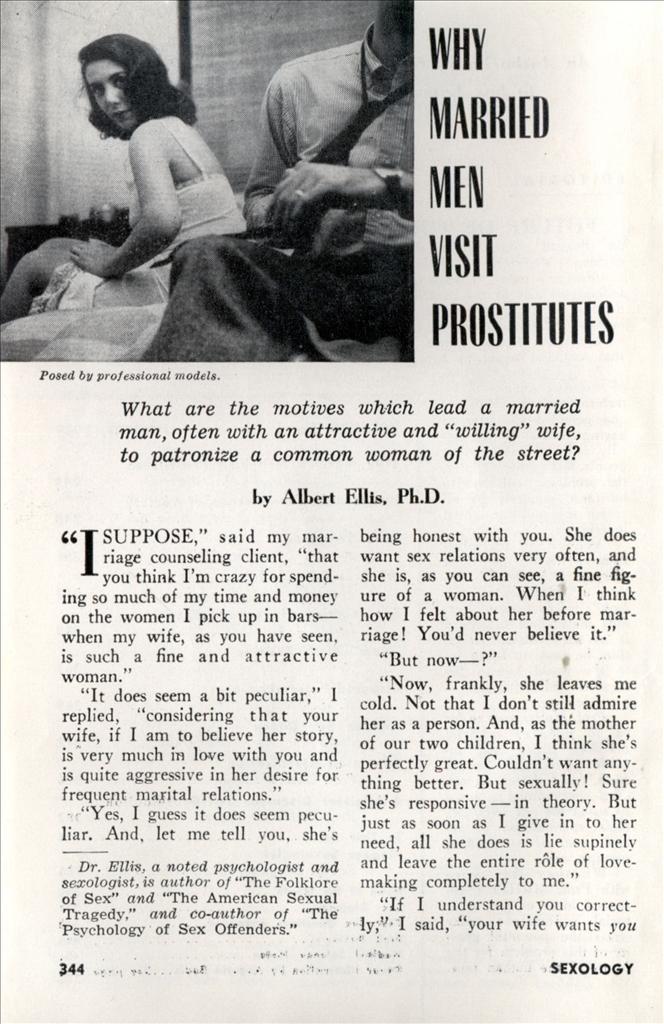 What are the motives which lead a married man, often with an attractive and “willing” wife, to patronize a common woman of the street?

“I SUPPOSE,” said my marriage counseling client, “that you think I’m crazy for spending so much of my time and money on the women I pick up in bars— when my wife, as you have seen, is such a fine and attractive woman.”

“It does seem a bit peculiar,” I replied, “considering that your wife, if I am to believe her story, is very much in love with you and is quite aggressive in her desire for frequent marital relations.” – “Yes, I guess it does seem peculiar. And, let me tell you, she’s being honest with you. She does want sex relations very often, and she is, as you can see, a fine figure of a woman. When I think how 1 felt about her before marriage! You’d never believe it.”

“Now, frankly, she leaves me cold. Not that I don’t still admire her as a person. And, as the mother of our two children, I think she’s perfectly great. Couldn’t want anything better. But sexually! Sure she’s responsive — in theory. But just as soon as I give in to her need, all she does is lie supinely and leave the entire role of love-making completely to me.”

“If I understand you correctly,” I said, “your wife wants you to do the active lovemaking, while she, once coitus begins, does little or nothing. Is that right?”

“That’s exactly right — or exactly wrong, if I may coin a phrase. While the other women I go with—for the right payment and half a kind word—they’ll do almost anything I want. And they seem to get satisfaction out of it, too, a good many of them. Now do you see why I prefer them to my good-looking, fine, respectable young wife?”

I did see, very clearly. And I often see why many of my married clients patronize prostitutes, from high-class “call girls” to two-dollar women of the street, even when they have handsome and “willing” wives. For their wives, in many instances, are only willing within definite limits. They may be willing to have face to face coitus— but to try no variations of intercourse, which they consider “unnatural.” Or when these wives do try varied sex positions or acts which their husbands particularly desire, they do so reluctantly, listlessly, and guiltily, thus taking away all their husbands’ satisfaction.

Prostitutes, on the other hand, are in the business of satisfying their customers. For a stipulated fee, they will do almost anything a male desires; and will do so, in most instances, freely, guiltlessly, with verve.

Why, then, says many a male, even if he loves and respects his wife and wants to keep their marriage together, should he not patronize the woman who makes it her business to satisfy him sexually?

Other reasons why literally millions of married men regularly or irregularly patronize prostitutes include the following:

1. Many males, even though they derive satisfaction from sex relations with their wives, feel that they need a variety of partners. Some want a different type than their wives—such as a blonde instead of a brunette, or a young instead of a middle-aged woman.

Others simply want a different individual from the one with whom they participated a day ago or a week ago. The quickest and easiest way for many of these males to find a different partner is to patronize a prostitute.

2. In many instances, husbands who do not normally need sexual variety find they have no wish to remain abstinent when they are separated from their wives, when their wives are ill, or when they desire intercourse more frequently than the wives do. Again, resort to prostitutes may be easier in these instances than engaging in extramarital affairs.

3. Some men who crave variety feel that patronizing prostitutes is safer, less involving, and more loyal than having non-prostitutional affairs; and in many instances their wives agree with this viewpoint and tolerate their seeing a prostitute far better than they would tolerate a non-prostitutional relationship.

4. A surprisingly large number of men, I have found in my clinical experience, fail miserably in their marital relationships, largely because of their ignorance and prudery in regard to how to satisfy their wives sexually.

Such men are frequently impotent or sexually below par because, consciously or unconsciously, they subscribe to self-defeating sex notions which sabotage their powers and potentialities. Out of shame, they avoid having marital relations and resort to prostitutes with whom, because they pay, they are not ashamed to be poor lovers.

5. Occasionally, a man’s wife refuses to use proper birth control technique; and, rather than have intercourse with her and risk having unwanted children, he patronizes women of the streets.

6. Some men’s wives are so stingy of affection, and demand so much in return for having steady sex relations, that the male finds it actually cheaper and less emotionally blackmailing to visit prostitutes.

7. Once in a while, a man becomes deeply attached to a prostitute and keeps patronizing her, rather than bedding with his wife, because he genuinely cares for her and enjoys her company more than that of his spouse.

8. Some men, particularly those with low self-esteem, ignore the monetary element in their patronage of harlots, and convince themselves that they are making one real conquest after another in the course of such patronage. To them, even a paid “conquest” is satisfying.

9. Many husbands, for a number of neurotic reasons, occasional- ly or steadily visit prostitutes. Some thus vent their hostility against their wives. Others masochistically want to degrade themselves. Others find it impossible to be fully potent with a “good” woman. Still others seek the danger of an illicit encounter.

For a host of fearful, hostile, or guilt-laden reasons, or to erect defenses against their underlying irrational anxieties, such individuals find temporary “solutions” to their problems by bedding with a prostitute.

In general, then, a married man will resort to prostitutional affairs either for relatively sane reasons —such as the sexual inaccessibility of his wife—or for irrational ones —such as his unwillingness to face the real reasons for his being sexually unsatisfied in marriage.

In almost all cases where I have had personal contact with married males who steadily frequent women of the street, the irrational and neurotic reasons for so doing were predominant. This may partly result, however, from the fact that most people who seek my counsel are, as one might expect, fairly disturbed.

Where married males are regular patrons of prostitutes, and where they want to do something about their basic sex and general problems, cure or significant improvement is usually effected in reasonably short order.

In the case of the man whose wife refused to take an active part in coitus, it was a simple matter to induce her to participate more actively and more responsively.

At least, it was simple once I had shown him that his negative attitude toward her was encouraging her resistance in this connection, and that the more he worked at being nice to her and inducing her to be a more satisfactory sex partner, the better results he would be likely to attain.

In most instances, the husband’s neurotic attitudes about himself, about sex, about his wife, and about prostitutes must be explored.

One of my patients, for example, felt that he was so worthless that none but a prostitute, not even his own wife, could really care for him or find satisfaction in sex relations with him.

Another was patronizing call girls regularly because he was still rebelling against his mother’s early lectures against his having illicit affairs. Unconsciously, he still wanted to spite her as well as his wife (who, symbolically, he saw as another mother-figure) rather than primarily to go after the kind of sex-love satisfaction he really wanted for himself.

When irrational, early-acquired attitudes such as these are ruthlessly exposed in the course of counseling or psychotherapy, and relentlessly attacked in the light of the individual’s real goals and satisfactions, the prostitutional affairs of most men are voluntarily or spontaneously stopped.

– Dr. Ellis, a noted psychologist and sexologist, is author of “The Folklore of Sex” and “The American Sexual Tragedy,” and co-author of “The Psychology of Sex Offenders.”