Why Modern Armies Still Cling to the Cavalry (Nov, 1932)

Entertaining article that explains why the core of any military force will always be made up of men and horses.
“Machines of war can only be adjuncts to their superior flexibility.”

Do we still have any mounted cavalry? I’ve seen pictures of those Special Forces guys in Afghanistan, but that’s about it. 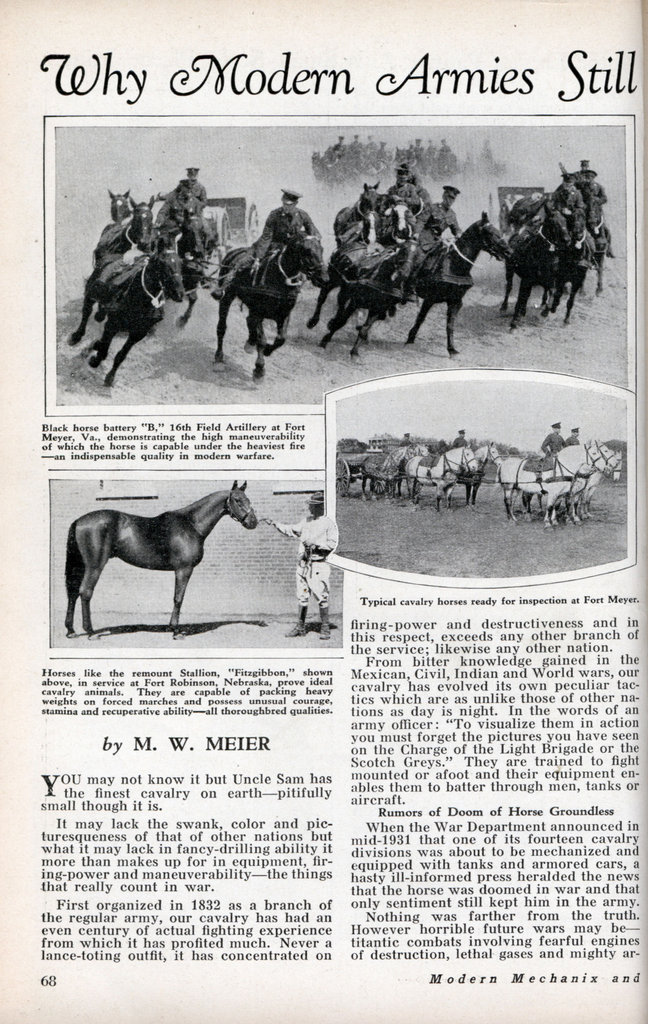 Why Modern Armies Still Cling to the Cavalry

The tank is a powerful weapon, but the faithful horse can still outfight it in many situations encountered on modern battlefields.
Here is told the cavalry’s side of the story.

YOU may not know it but Uncle Sam has the finest cavalry on earthâ€”pitifully small though it is.

It may lack the swank, color and picturesqueness of that of other nations but what it may lack in fancy-drilling ability it more than makes up for in equipment, firing-power and maneuverabilityâ€”the things that really count in war.

First organized in 1832 as a branch of the regular army, our cavalry has had an even century of actual fighting experience from which it has profited much. Never a lance-toting outfit, it has concentrated on firing-power and destructiveness and in this respect, exceeds any other branch of the service; likewise any other nation.

From bitter knowledge gained in the Mexican, Civil, Indian and World wars, our cavalry has evolved its own peculiar tactics which are as unlike those of other nations as day is night. In the words of an army officer: “To visualize them in action you must forget the pictures you have seen on the Charge of the Light Brigade or the Scotch Greys.” They are trained to fight mounted or afoot and their equipment enables them to batter through men, tanks or aircraft.

Rumors of Doom of Horse Groundless

When the War Department announced in mid-1931 that one of its fourteen cavalry divisions was about to be mechanized and equipped with tanks and armored cars, a hasty ill-informed press heralded the news that the horse was doomed in war and that only sentiment still kept him in the army.

Nothing was farther from the truth. However horrible future wars may beâ€” titantic combats involving fearful engines of destruction, lethal gases and mighty artilleryâ€”man’s best friend, the horse, is sure to play his part in them.

His value is too clearly established to ever be utterly eliminated by push-buttons and motors. In a highly-mechanized age, his mobility and usefulness seem destined never to be matched.

To him goes no little of the credit for winning the late World War. His strength and dumb-willingness have been deciding factors in every major land battle for thousands of years. Since history began, he has played his part with man and shared his victories and defeats.

The answer to the argument as to whether the horse is doomed in future wars is really a simple oneâ€”he will be indispensable in battle until they are solely fought from pavements, water or in the air!

Motors, however perfected, can never equal the mobility of the horse in crosscountry terrain; can never swim rivers, climb mountains and traverse swampy areas regardless of weather and seasons.

He is still the “eyes, ears and muscle” of armies and will be so until airplanes can see by night and motors are built to do the impossible. Until then, all mechanized forces are but helpful adjuncts to manâ€”and the horse.

The power of an army depends on its mobility. It must quickly reach strategic positions, regardless of railroads, highways and difficult terrain. Once there, it must combine superior generalship with firing-power, shock and movement and be equally facile at attack or defense.

Say what you will, only highly-organized and equipped cavalry can possess all these advantages and beside them, all the death-dealing machinery in the world can only be regarded as helpful auxiliaries.

Mechanized forces are lovely things to conjecture over but in warfare their very immobility defeats them. They are unwieldy, difficult to control and extremely vulnerable in rough terrain. Fuel is ever a problem.

The vaunted tank was invented as the “cure” for German machine guns and trench warfare. It had its one big day but after that, the Germans were ready for it. Of the 415 that went into action at Amiens, August, 1918, only 67 returned to base. All the others had been put out of action.

One Cavalryman Can Demolish Tank

England has spent hundreds of millions experimenting with tanks. The cheapest decent model costs around $40,000 to produce. But one cavalryman, hidden behind a tree, sandbag or metal shield, can reduce it to a mass of worthless junk in thirty seconds, using a gun which costs only a few hundred dollars!

Our troopers are all equipped with automatic rifles and machine guns before which no tank or armored car can stand. We have developed a simple anti-tank gun which fires 400 rounds to the minute. It can be packed or unpacked in split minutes and is readily loaded on a horse’s back.

We have other automatic weapons that range from the hard-hitting .45 automatic pistol to 37 mm. caliber. This last-mentioned wicked weapon weighs 209 pounds complete and is easily packed on a single horse. It takes 31 seconds to unpack and assemble and 13 shots can be fired per minute at a moving target. In recent tests, this “little” result-producer readily pierced 5/8″ steel boiler plate at 550 yards. Not so good for enemy tanks!

Airplanes and dirigibles are doughty weapons to cope with but man’s inventive genius has devised nullifying instruments that so far offset their every advantage. “Dog-fights” and sporadic bombing can scarcely determine a war and far distant is the time when every soldier will fly. Until then a dismounted cavalryman or two, operating a special aircraft rapid-fire gun can hold their own. They can rain up .30s, .50s and 37 mms. to their heart’s content.

All this is not to belittle the value of mechanized force in warfare. Rather it is to help point out its definite limitations. Once that point is reached, man-power and horse-flesh must carry on. Machines of war can only be adjuncts to their superior flexibility.

Both the Boer and World wars were striking examples of the value of the horse. The Boer conflict lasted as long as it did because De Wet’s 2700 illy-equipped troopers happened to be mounted on tough little horses of half-Arabian and native stock. These mostly survived the war as compared to England’s horse casualties of 400,000. This nearly exhausted their stock and not until they bought a hundred thousand of our hardy Western cow ponies were they able to outride the Boers.

The World War was largely a trench affair but horses played a noteworthy part. They not only fought and died but their carcasses were immediately consumed for food. In his splendid article on the history of our cavalry in Our Army Magazine, for June, 1931, Major-General Henry, Chief of Cavalry, U. S. A., quotes three allied generals on their need for cavalry during 1918.

Lt. Gen. Liggett, who commanded our own 1st Army, is quoted as wishing for a couple of divisions of cavalry trained as our own cavalry is trained. “Had these been available I do not think any organized enemy force could have crossed the Meuse and captures in material would have been much greater.”

In 1918, a small force of French cavalry successfully blocked the retreat of the Bulgarian army, resulting in the surrender of 90,000 men and the total withdrawal of Bulgaria from the war.

General Allenby’s campaigns against the Turks were chiefly cavalry engagements and to their success is traced the defeat of Turkey. Italian cavalry on the Piave River in the great Vitorio-Veneto battle, completed the destruction and surrender of 1,200,000 AuStriansâ€”a movement which ended that country’s participation.

I If war were to break out tomorrow, the problem of adequate horseflesh would be a terrific one. The cavalry isn’t the only branch where horses are needed. The artillery, quartermaster-supply, medical and even infantry divisions must have their quotas to carry on.

Horse of Future a Better Animal

Experts figure that by 1940 there will be a total of less than ten million of both horses and mules in this country. BUTâ€”those ten million will be far superior animals than we possess today!

They will be better because of a unique branch of the army known as the U. S. Remount Service which has for its chief purpose the improvement of horses throughout the United States and possessions.

The work of the Remount Service is so amazing and useful that every reader of Modern Mechanix and Inventions ought to know about it. Today, that organization handles 730 government-owned stallions and a most conservative estimate of the foals produced by the plan is set at $10,-500,000 to offset a total cost to taxpayers during the decade, of $1,500,000. At no cost to the army, a reserve of 100,000 fine horses has been created which would be available in case of war.

Remount stallions are at present available to farmers and horse-breeders in 39 different states and both Hawaii and Porto Rico. Stallions are sent to areas at government expense and placed in the hands of reliable individuals. Government stallions are supervised from Remount bureaus located in five zonesâ€”Lexington, Ky., Fort Reno, Okla., Kansas City, Mo., Colorado Springs, Colo., and Fort Douglas, Utah. If you want any information any of these posts will gladly answer you.

In addition to these bureaus, the remount operates three depots where breeding experiments are carried on and stallions conditioned. These depots are located at Front Royal, Va., Fort Reno, Okla., and Fort Robinson, Neb.