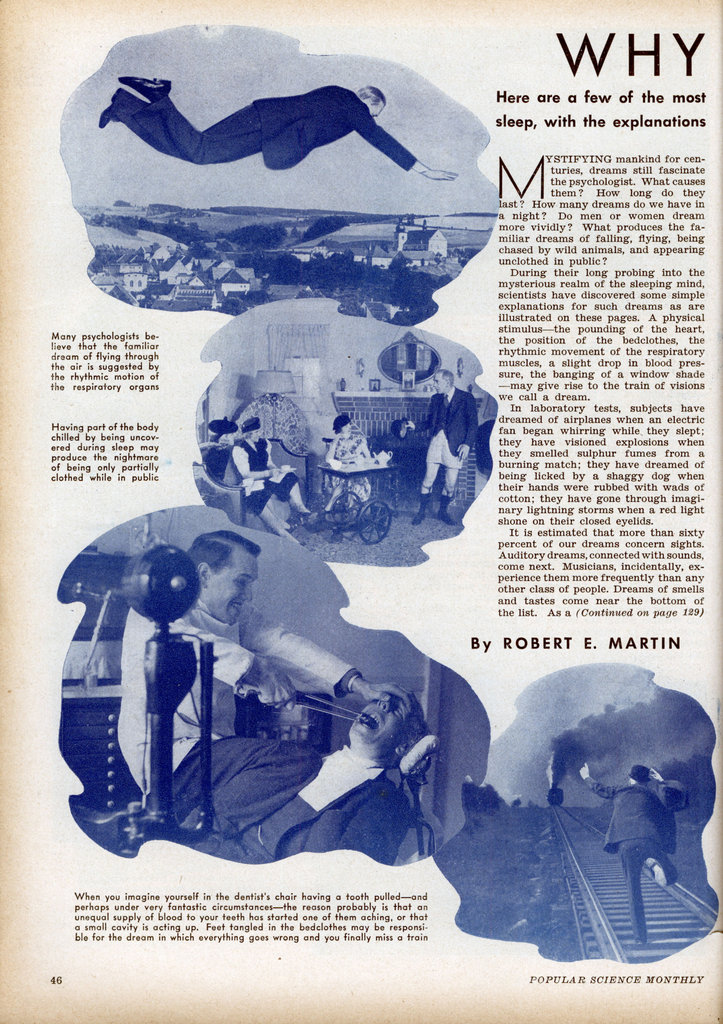 Here are a few of the most common nightmares that visit our minds during sleep, with the explanations given them by modern psychological experts

MYSTIFYING mankind for centuries, dreams still fascinate the psychologist. What causes them? How long do they last ? How many dreams do we have in “a night? Do men or women dream more vividly? What produces the familiar dreams of falling, flying, being chased by wild animals, and appearing unclothed in public?

During their long probing into the mysterious realm of the sleeping mind, scientists have discovered some simple explanations for such dreams as are illustrated on these pages. A physical stimulusâ€”the pounding of the heart, the position of the bedclothes, the rhythmic movement of the respiratory muscles, a slight drop in blood pressure, the banging of a window shade may give rise to the train of visions we call a dream.

I In laboratory tests, subjects have dreamed of airplanes when an electric fan began whirring while they slept; they have visioned explosions when they smelled sulphur fumes from a burning match; they have dreamed of being licked by a shaggy dog when their hands were rubbed with wads of cotton; they have gone through imaginary lightning storms when a red light shone on their closed eyelids.

It is estimated that more than sixty percent of our dreams concern sights. Auditory dreams, connected with sounds, come next. Musicians, incidentally, experience them more frequently than any other class of people. Dreams of smells and tastes come near the bottom of the list. As a rule, persons who are healthy have pleasant dreams; those who are sick, the reverse. Children under four years of age have few, if any, dreams. The greatest activity of the sleeping mind occurs between twenty and thirty-five. Persons beyond sixty-five years of age have comparatively few dreams and most of them concern scenes and activities of the distant past.

SOME people can recall as many as ten dreams they have had the night before. The vividness of these imaginary experiences varies widely. Women, as a rule, dream more and with greater vividness than men. The average length of a dream, one research scientist calculates, is approximately thirty seconds. The whole action of a long train of visioned events may appear before the mind’s eye in a flash.

A classic example is the dream of the English novelist, Charles Dickens. In it, he imagined he had died and saw himself taken to an undertaker’s establishment where men worked for hours sawing and hammering to make a casket. One of the men dropped a board and Dickens saw himself come to life.

He awoke and found he had been dozing in an arm-chair. Outside his window, a carpenter, making a garden fence, had just dropped a board. The whole dream had transpired during the moment he was regaining consciousness.

While not all dreams can be accounted for by physical stumuliâ€” many arising from the mysterious realm of subconscious personalityâ€”a large share of the most familiar visions can be traced to understandable, physical causes. The mind, in trying to account for the sensations of the body, produces these fantastic explanations we call dreams.