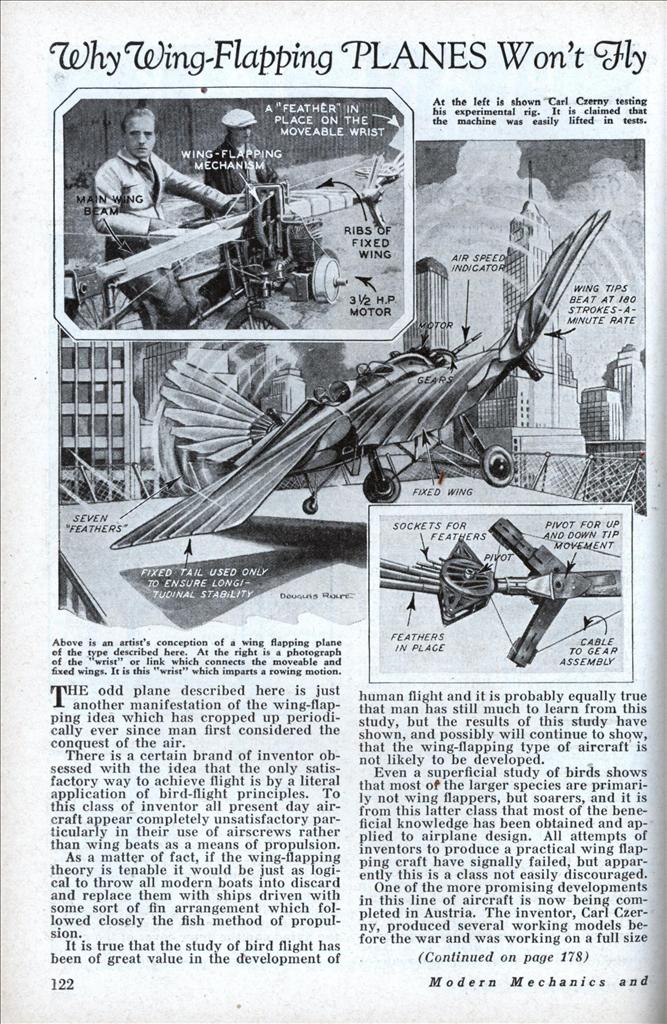 THE odd plane described here is just another manifestation of the wing-flapping idea which has cropped up periodically ever since man first considered the conquest of the air.

There is a certain brand of inventor obsessed with the idea that the only satisfactory way to achieve flight is by a literal application of bird-flight principles. To this class of inventor all present day aircraft appear completely unsatisfactory particularly in their use of airscrews rather than wing beats as a means of propulsion.

As a matter of fact, if the wing-flapping theory is tenable it would be just as logical to throw all modern boats into discard and replace them with ships driven with some sort of fin arrangement which followed closely the fish method of propulsion.

human flight and it is probably equally true that man has still much to learn from this study, but the results of this study have shown, and possibly will continue to show, that the wing-flapping type of aircraft is not likely to be developed.

Even a superficial study of birds shows that most of the larger species are primarily not wing flappers, but soarers, and it is from this latter class that most of the beneficial knowledge has been obtained and applied to airplane design. All attempts of inventors to produce a practical wing flapping craft have signally failed, but apparently this is a class not easily discouraged.

One of the more promising developments in this line of aircraft is now being completed in Austria. The inventor, Carl Czerny, produced several working models before the war and was working on a full size

experimental ship at the time of his death. The results obtained from this plane encouraged the formation of the Austrian Wing-Flapping Aircraft Co., which is now engaged in continuing Czerny’s experiments.

The Czerny plane shows evidence of a serious and carefully thought out plan to utilize wing beats not only as a means of forward propulsion but also as a means of controlling stability, steering, ascent and descent

Realizing that the larger birds, particularly the soarers, do not derive their lift and forward motion by employing action of the entire wing but maintain a constant and sometimes almost imperceptible motion of the outer wing, Czerny embodied this principle in his design. Consequently it is only the tips of the wings that flap on the Czerny plane—the main wing being a fixed surface similar to that found on conventional planes.

Moreover there is an attempt to utilize the air pressure itself to assist the flapping action and thereby dispense with the excessive horsepower usually required to move the wings. A 3 V2 horsepower motor on the experimental plane proved sufficient to flap the wings and with only two “feathers” in place on each wing it is claimed that the plane lifted from the ground.

Briefly described, the Czerny plane resembles a normal ship in general appearance with the startling exception that it has neither propeller nor vertical rudder. The main plane has at each tip a peculiar wrist-like device in which are mounted, fan-wise, seven flexible single spar wings or “feathers,” the longest of which is about 6 feet long. These “feathers,” being quite flexible, automatically adjust themselves to air conditions, and the motion of the wing. This quality, combined with the peculiar action of the “wrist,” enables the wings to be flapped and moved in a rowing motion without the use of excessive power.

The general action of the wings in flight is a flapping, rowing motion but either action can be used at the discretion of the pilot. That is to say, if for instance the plane has to be landed in a small space, the pilot can control the wing beats so as to curtain the propelling action and increase the up and down flapping to land in much the same manner as a bird. This wing action is connected to the motor through the “wrists” by cables and gears. The “wrists” themselves are the secret of the inventor and no information is available on how the action is obtained.

The pilot can similarly control the wing action to take care of steering and maintaining lateral balance. The fixed tail is not controllable.