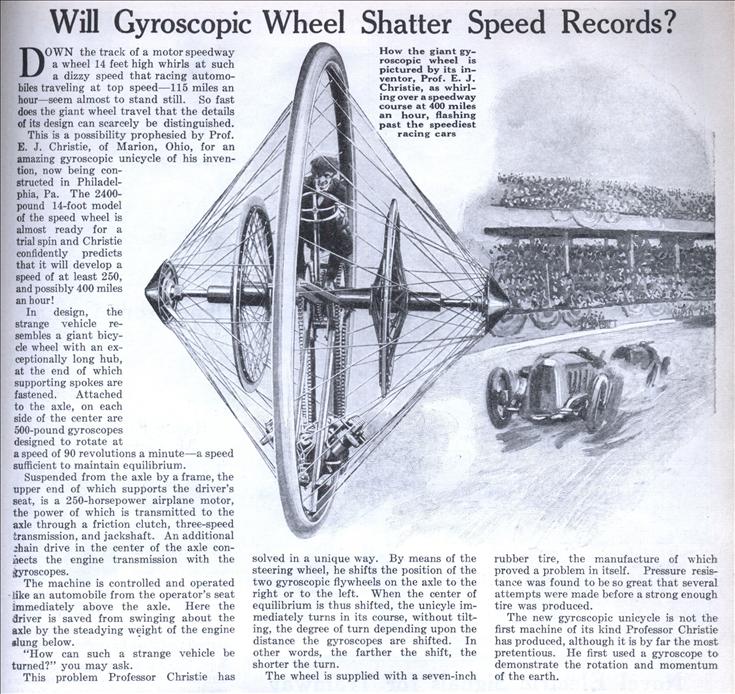 DOWN the track of a motor speedway a wheel 14 feet high whirls at such a dizzy speed that racing automobiles traveling at top speedâ€”115 miles an hourâ€”seem almost to stand still. So fast does the giant wheel travel that the details of its design can scarcely be distinguished. This is a possibility prophesied by Prof. E. J. Christie, of Marion, Ohio, for an amazing gyroscopic unicycle of his invention, now being constructed in Philadelphia, Pa. The 2400-pound 14-foot model of the speed wheel is almost ready for a trial spin and Christie confidently predicts that it will develop a speed of at least 250, and possibly 400 miles an hour!

In design, the strange vehicle resembles a giant bicycle wheel with an exceptionally long hub, at the end of which supporting spokes are fastened. Attached to the axle, on each side of the center are 500-pound gyroscopes designed to rotate at a speed of 90 revolutions a minuteâ€”a speed sufficient to maintain equilibrium.

Suspended from the axle by a frame, the upper end of which supports the driver’s seat, is a 250-horsepower airplane motor, the power of which is transmitted to the axle through a friction clutch, three-speed transmission, and jackshaft. An additional chain drive in the center of the axle connects the engine transmission with the gyroscopes.

The machine is controlled and operated like an automobile from the operator’s seat immediately above the axle. Here the driver is saved from swinging about the axle by the steadying weight of the engine slung below.

“How can such a strange vehicle be turned?” you may ask.

This problem Professor Christie has solved in a unique way. By means of the steering wheel, he shifts the position of the two gyroscopic flywheels on the axle to the right or to the left. When the center of equilibrium is thus shifted, the unicyle immediately turns in its course, without tilting, the degree of turn depending upon the distance the gyroscopes are shifted. In other words, the farther the shift, the shorter the turn.

The wheel is supplied with a seven-inch rubber tire, the manufacture of which proved a problem in itself. Pressure resistance was found to be so great that several attempts were made before a strong enough tire was produced.

The new gyroscopic unicycle is not the first machine of its kind Professor Christie has produced, although it is by far the most pretentious. He first used a gyroscope to demonstrate the rotation and momentum of the earth.