Wow, the spell checker did not like this one. 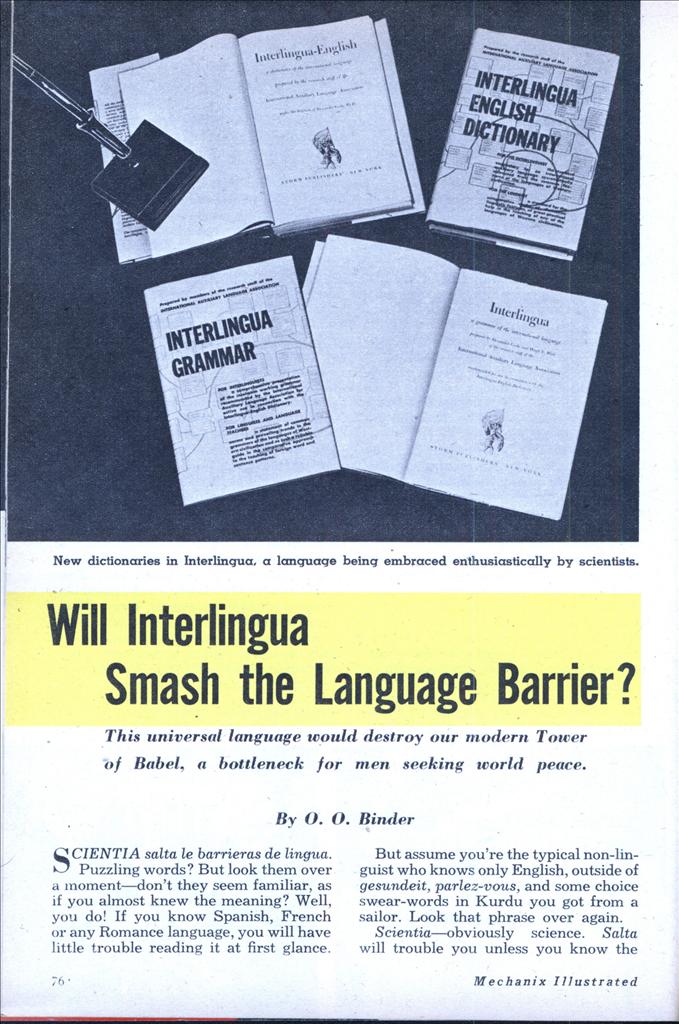 Will Interlingua Smash the Language Barrier?

This universal language would destroy our modern Tower of Babel, a bottleneck for men seeking world peace.

SCIENTIA salta le barrieras de lingua. Puzzling words? But look them over a momentâ€”don’t they seem familiar, as if you almost knew the meaning? Well, you do! If you know Spanish, French or any Romance language, you will have little trouble reading it at first glance.

But assume you’re the typical non-linguist who knows only English, outside of gesundeit, parlez-vous, and some choice swear-words in Kurdu you got from a sailor. Look that phrase over again.

Now it readsâ€”Science leaps the barriers of language.

This is a sentence in Interlingua, the new universal language that is sweeping the scientific world and holds promise of catching on as a world language where all prior tries failed. Enthusiastic scientists in most of the western worldâ€” Europe, North and South Americaâ€”are now using it, plus groups in Israel, Japan, Formosa, Australia and India. Fifteen international science journals are now published regularly in Interlingua.

Will Interlingua finally smash the Language Barrier? Will it penetrate the Babel Curtain that has plagued humanity far longer and more unhappily than the Iron Curtain? Will our grandchildren learn Interlingua and be unable to understand English, German, Russian, Siameseâ€”any tongue of today?

It can happenâ€”and should. Or at least, besides local languages, there should be one universal speech known to all, as a secondary tongue.

The human race today is still a “bunch of foreigners” to one another. Too many peace-promoting ideas are lost internationally when kicked around between dissimilar grammars, obscured in a semantic fog. In world trade, businessmen must either learn half a dozen languages themselves or hire an expensive staff of translators.

Our modern Tower of Babel is a bottleneck for human minds seeking common ground. Language groups may be as geographically close as across a river, yet as far off as the moon in mutual understanding. Hardly anyone can question the obvious benefits of one language, spoken by all the billions on our planet, so that anything said by anyone, anywhere, would be immediately understood by everybody, everywhere.

But finding an acceptable world language is not easy. It has been tried before, some 300 times!

Since the 1600’s at least, thinking minds have tried to formulate a single language suitable to all. Many such languages were laboriously worked outâ€”Solresol, Lingualumina, Spokil, Volapuk, Ido, Occidentalâ€”only to become as dead as Sanskrit. Esperanto, launched in 1887, achieved the most success and still has adherents in every corner of the globe. But it has seemingly reached a stalemate, gaining little headway.

Why did all such artificial languages fall by the wayside?

This was the question the Interlingua founders asked themselves. Shrewdly, they sensed that language is a personal thing with every people. And by tradition, our native tongue becomes a Sacred Cow that, despite its most glaring faults, we hang onto stubbornly. A new streamlined language may be better but seems foreign, to be mistrusted.

For this reason, human nature being what it is, an even worse solution than invented languages was the suggestion to make the best existing language universal. Ah, but which is “best?” English is highly expressiveâ€”but with vile grammar and wild pronunciation. German is thorough, preciseâ€”but sounds hideous. Spanish is melodiousâ€”but lacks a wide range of subtle meanings. And so on. All current languages have faults. None is perfect.

But more significantly, any choice would run head-on into national pride. Choosing French, for instance, would delight 50 million Frenchmen but insult 2,000 million others on Earth, for ignoring their own “beautiful” and “superior” tongue. A mass language strike would almost certainly result, if any one language were declared official and rammed down people’s throats willy-nilly.

What is the answer?

The Interlingua pioneers found theirs in a striking historical fact about human speech. All the Romance and Teutonic languages of Europe today stem from a previous mother tongueâ€”Latin. This, in turn, was an offshoot of an Indo-European tongue of antiquity that covered India, Persia, Greece and the Russias. All this embraces a gigantic mass of humans in one language form, including half of Asia, all of Europe, the entire Americas, North and South â€”well over half the world.

This ready-made basic tongue of the majority of mankind inspired Italian Professor G. Peano, in 1903, to lay the groundwork for Interlingua. Knowing it senseless to revive the dead parent tongue, he ingeniously boiled down all its mod- ern derivatives to a speech structure of the most common morphemes â€” root meanings â€” that were on the “tip of the tongue” of some 1,500 million Occidentals.

However, Professor Peano did not single-handedly perfect Interlingua to what it is today. That long, hard job was carried on by many devoted disciples. In 1924, Interlingua got its real start when a far-sighted conference of linguists, seeking an international language, chose Peano’s basic concept. The International Auxiliary Language Association was formed to promote research and development on Interlingua. In 1953, the I ALA asked Science Service â€”a non-profit organization famed for promoting science in the best public interestsâ€”to carry on with Interlingua. This is now being done from offices at 80 East 11th Street, New York City, under the able leadership of Alexander Gode, Ph.D., Chief of the Interlingua Division of Science Service. Incidentally, you may write to Dr. Gode at that address for a free information kit on Interlingua.

In an illuminating interview, Dr. Gode stated that Interlingua is not being promoted as a possible world language. They believe it can serve as such some day, but will not attempt to force it down the world’s gullet unless it is wanted. He believes that its phenomenal success in the science world points to its eventual progress into other fields.

Why? Because it is a natural language, not a manufactured one. It has existed in basic form all along and has only been tailored to serve a practical purpose. And that far from being rigidly set, Interlingua is a living, growing language, constantly being changed and improved, following only a few necessary basic rules.

For example, pronunciation of any word, old or new, is always according to the majority of Romance-Teutonic speakers, or the Standard Average European. The special “th” sound, which occurs tongue-twistingly in English only, is therefore not accepted since it is a minority form.

Their dictionary of some 27,000 words need not be expanded, Dr. Gode says, for it forms the basis of Interlingua, from which all other added words can be easily derived by their simple system of word formation. Any new word can be proposed for adoption from outside sources, at any time.

Kids will cheer if Interlingua is ever taught in schools. No confusing genders, no com- . plex case endings, no weird spellings, no fiendish exceptions to the rule. All fossil language customs are barred, notably the thee-thou anachronism which relates back to the days of nobility and peasants, a concept defunct today.

A simplified grammar of just five pages gives all the basic elements of Interlingua. Kids won’t cheer any louder than adults over that.

But here is perhaps the real stroke of genius in Interlingua. It does use “unnecessary” speech customs in certain instances â€”like retaining different case forms for “I, me, mine” and the other personal pronouns. Why? Because that universal custom has been around for so many centuries it is second-nature with us all. It is actually easier for us to use such mixed pronouns. Think how uncomfortable we would be, saying: “Give it to I!”

Just what is Interlingua?

At first glance it looks like Spanish or French or Italian. Or like a mixture of the three. Such Romance groups can read Interlingua almost at a glance, only thinking it “funny Spanish” or “dialect French.” But it is also easy for an American or German to read at a second glance. Their eye soon meets roots that are English or German or international already.

he articulo definite es “le” in omne casos. Translation: “The definite article is ‘the’ in all cases.”

he plural del substantivos se termina in “s” o “es”. “The plurals of nouns (substantives) terminate in ‘s’ or ‘es’ “. Really half-English, isn’t it? And actually a lot easier to assimilate than Chaucerian English. Take a glance at this.

How many basic words do you know at first glance? No less than 15, perhaps 20. Try to guess at the meanings of other less familiar words. As an experiment, work out a rough translation, then compare it to this one.

“Energy is necessary for everything that happens in the world. Today coal, oil, water and wood give us our gross power. The heat and light of the sunâ€”eight minutes away from us as measured by radiation’s travel timeâ€”is a matter of life.”

You can judge for yourself how simply and smoothly Interlingua gets its message across. The betting is good that it may be the foundation for an evolving, living all-languages-in-one that may smash the Language Barrier some day.

No, a world language will not insure a future Utopia of human brotherhood. The sagacious Interlinguists, spearheaded by Dr. Gode, claim no exalted virtues other than having something of practical benefit in human communication. But as practical things have a habit of doing, Interlingua may spread all by itself.

Dr. Gode said, very wisely I think, that Interlingua cannot solve all world problems, only some. But that at least a world language would eliminate the tangle of multiple tongues which hinders the development of a more peaceful and homogenous human society.

A universal language, whether it be Interlingua or some other, can certainly help mankind toward the goal of becoming one big, happy family if every soul on earth instantly understood this phrase, for instance. . .

You may not need the translation by nowâ€” “Greetings from one human being to all my fellowmen around the world!”