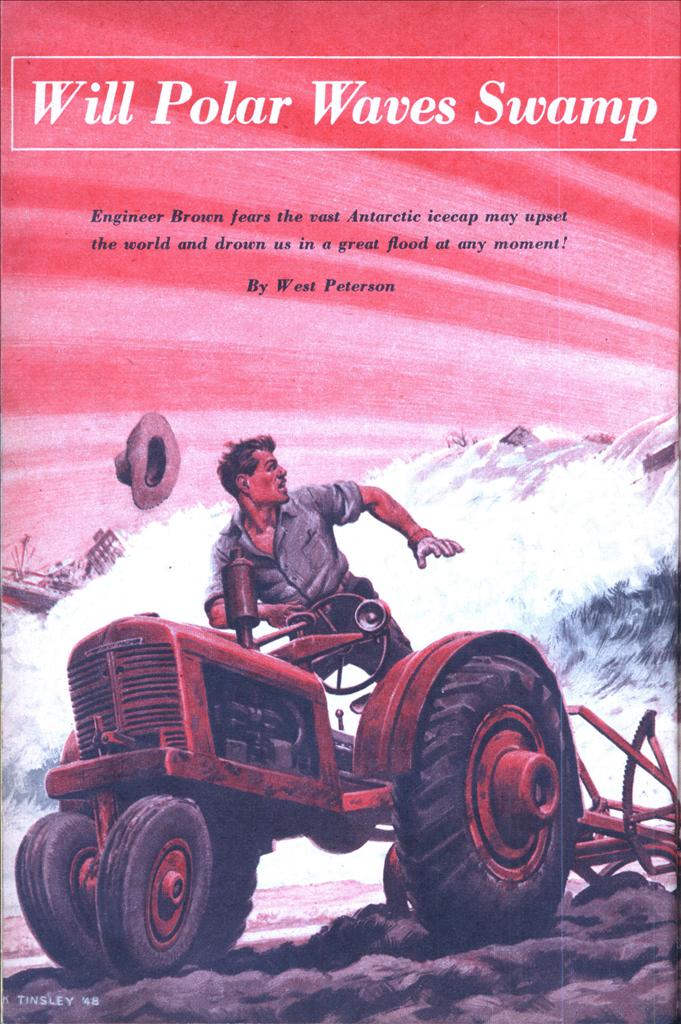 Engineer Brown fears the vast Antarctic icecap may upset the world and drown us in a great flood at any moment!

FARMER Williams was plowing the field back of his red barn in central Indiana shortly before noon. A few more furrows and he could quit for lunch. Then above the regular clatter of his tractor he heard an ominous, ground-shaking rumble. He turned on the tractor seatâ€” and saw a towering mountain of water roaring down upon him.

The sweeping wave brought death to Farmer Williams and churned the Mid-West into an inland sea.

This may be the doom of America and our world as we know it. And that doom may crash upon us at any moment, according to Hugh Auchincloss Brown, 69-year-old electrical engineer of Douglaston, Long Island.

Engineer Brown firmly predicts this battered old earth is long overdue for another great flood unless we can put off our Day of Doom with a $10,000,000 atomic project.

Brown declares we must blast the Antarctic icecap with atom bombs!

It sounds utterly fantastic. Yet the theory has received serious attention in the press and certain scientific circles. Brown, a modern-day Noah, has spent much of his spare time over the past 35 years in building up his theory. He has even printed a treatise entitled “Popular Awakening Concerning the Impending Flood.”

Here are the two premises stated in the foreword to Brown’s work:

“1. The earth rotates on its present axis because of the centrifugal force caused by its equatorial bulge, which became established at the time of the latest flood. The centrifugal force of that bulge alone now temporarily prevents its rotating about some different axis.

“2. The centrifugal force of eccentric rotation of the great South Pole icecap tends to careen the globe. That force of rotation will roll the earth over and move Antarctica and its icecap almost directly under the sun because in due time it will neutralize and overcome the centrifugal force of the earth’s bulge. During the reeling period the earth will experience another of its recurrent great deluges when most living things perish. . . .”

In other words, according to Brown’s forecast, the weight of ice at the South Pole is going to pull the “wobbling” earth off its present axis. After the globe tilts the North Pole may be found somewhere in the equatorial Pacific, with the South Pole in Africa.

Brown cites two factors which, combined, will cause the shift.

In the first place, he asserts, it was discovered as far back as 1895 that the earth is spinning off-center. Astronomers over the past half-century have noted that the poles are “wandering.”

Secondly, the icecap at the South Pole is constantly growing. When the weight increases sufficiently, it will throw the earth off its present orbit completely.

It’s happened before at 8000-year intervals, the engineer says, and it’s bound to happen again! But Brown declares it is impossible to set any definite date for the disaster. His Doomsday may come in the year 2000, or 2048â€”or tomorrow!

The danger lies at the South Pole instead of the North, according to Brown, because the latter has a relatively small amount of ice. Here’s how he describes the Antarctic menace: “Before the latest careen of the globe, there was no ice in the land of Antarctica. Since then, for approximately 8000 years, the icecap has grown slowly . . . until now it covers an enormous area and is pyramided two miles high at the South Pole. . . . This growing icecap has become a stealthy, silent, relentless force of nature and is the glistening menace, the creeping peril and divinely appointed executioner to the civilization of our epoch of time.”

With the shift in the earth’s axis, Brown contends, much of the world will be flooded. Perhaps the only survivors will be the Eskimosâ€”if they can adapt themselves to a sudden switch to the tropics.

After the New York engineer’s theory was published, scientists of the U. S. Geological Survey scoffed at it. They said they doubted most strongly that any existing polar ice masses were likely to tip over the globe. Further, they declared, if there were indeed such a threat, atom bombing would not make much of a dent in the ice.

Brown took this criticism calmly, and remarked that no prophet of doom is ever popular. And he went on to give the details of his plan to preserve the earth as we know it.

“First,” he says, “we must make a careful survey of the antarctic ice, which would cost in the neighborhood of $10,000,000. To raise this sum, and to carry on the work, I advocate the forming of a Society for Global Stabilization.

“The survey, I estimate, would take two years. Metereological stations would have to be set up in the Antarctic to determine exactly how fast the icecap is growing. At least three exploration ships, with skilled engineers and scientists aboard, would have to circumnavigate the ice mass.

“The final step would be the bombing of the ice at strategic points so that it could run off into the sea. Blasts probably could best be planted in mountain ranges on the edges of the icecap. Thus, they would break the dam that holds back the frozen peril.”

Brown’s hobby of studying the “careening of the earth” had its inception 35 years ago when he read about the discovery of huge, prehistoric animals in the arctic tundra and glaciers. Explorers found these mammoths frozen in lifelike condition, with food still in their stomachs and jaws. This indicated that their deaths had been sudden.

“The idea occurred to me that possibly the perfectly preserved mammoths found in arctic tundra and ice had been careened from a tropic to a frigid zone,” Brown declared.

Taking land masses and particularly, mountain ranges into consideration, Brown calculated that before the last careen of the earth the polar regions must have been located in the Sudan Basin and in the region of Samoa in the Pacific. In the Sudan, he believed, the center of the icecap was at Africa’s present Lake Chad, which became the North Pole of that epoch.

What happened in the last epoch, he says, can put an end to our present epoch.

You can heed Engineer Brown’s warning and get ready for Doomsday. Or you can take your chances with the U. S. Geological Survey scientists who think that this old troubled world of ours will keep rocking along despite all that polar ice.