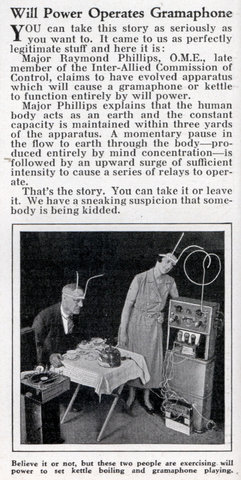 YOU can take this story as seriously as you want to. It came to us as perfectly legitimate stuff and here it is:

Major Raymond Phillips, O.M.E., late member of the Inter-Allied Commission of Control, claims to have evolved apparatus which will cause a gramaphone or kettle to function entirely by will power.

Major Phillips explains that the human body acts as an earth and the constant capacity is maintained within three yards of the apparatus. A momentary pause in the flow to earth through the bodyâ€”produced entirely by mind concentrationâ€”is followed by an upward surge of sufficient intensity to cause a series of relays to operate.
That’s the story. You can take it or leave it. We have a sneaking suspicion that somebody is being kidded.