Modern Mechanix
Issue: May, 1932
Posted in: Transportation
34 Comments on Will These Vehicles Run? (May, 1932) 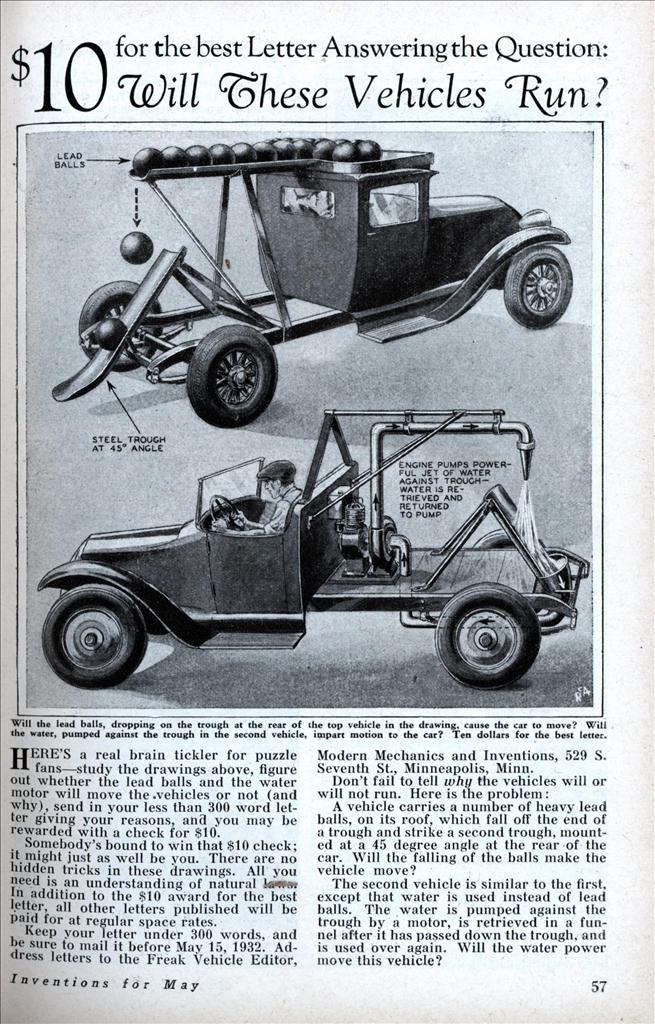 $10 for the best Letter Answering the Question:

Will These Vehicles Run?

HERE’S a real brain tickler for puzzle fans—study the drawings above, figure out whether the lead balls and the water motor will move the vehicles or not (and why), send in your less than 300 word letter giving your reasons, and you may be rewarded with a check for $10.

Somebody’s bound to win that $10 check; it might just as well be you. There are no hidden tricks in these drawings. All you need is an understanding of natural laws. In addition to the $10 award for the best tetter, all other letters published will be paid for at regular space rates.

Keep your letter under 300 words, and be sure to mail it before May 15, 1932. Address letters to the Freak Vehicle Editor,

Don’t fail to tell why the vehicles will or will not run. Here is the problem:

A vehicle carries a number of heavy lead balls, on its roof, which fall off the end of a trough and strike a second trough, mounted at a 45 degree angle at the rear of the car. Will the falling of the balls make the vehicle move?

The second vehicle is similar to the first, except that water is used instead of lead balls. The water is pumped against the trough by a motor, is retrieved in a funnel after it has passed down the trough, and is used over again. Will the water power move this vehicle?