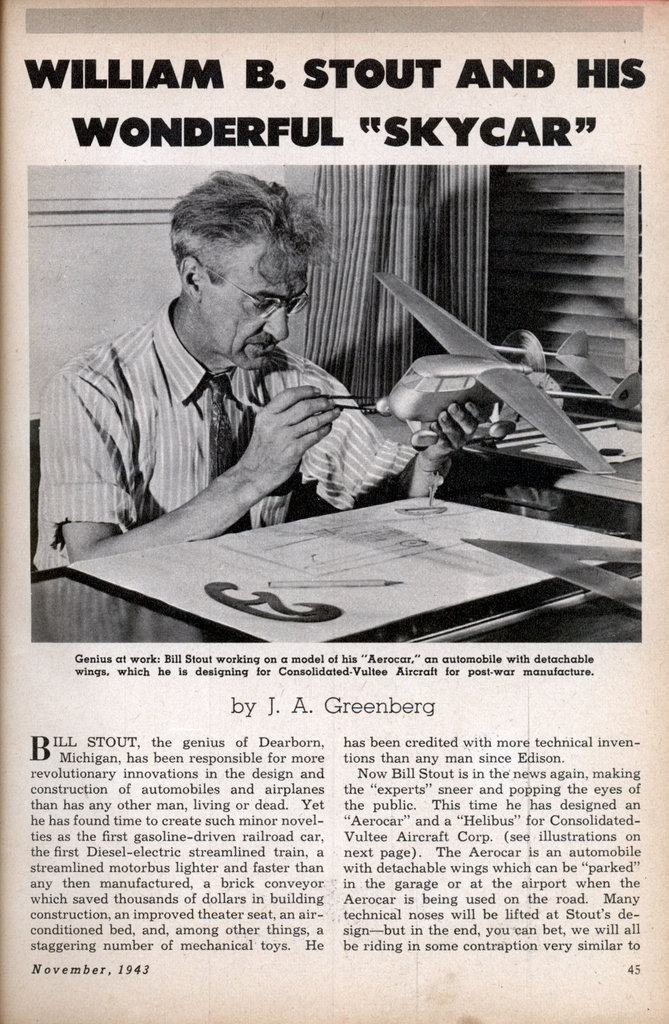 William B. Stout and his Wonderful “SKYCAR”

by J. A. Greenberg

BILL STOUT, the genius of Dearborn, Michigan, has been responsible for more revolutionary innovations in the design and construction of automobiles and airplanes than has any other man, living or dead. Yet he has found time to create such minor novelties as the first gasoline-driven railroad car, the first Diesel-electric streamlined train, a streamlined motorbus lighter and faster than any then manufactured, a brick conveyor which saved thousands of dollars in building construction, an improved theater seat, an air-conditioned bed, and, among other things, a staggering number of mechanical toys. He has been credited with more technical inventions than any man since Edison.

Now Bill Stout is in the news again, making the “experts” sneer and popping the eyes of the public. This time he has designed an “Aerocar” and a “Helibus” for Consolidated-Vultee Aircraft Corp. (see illustrations on next page). The Aerocar is an automobile with detachable wings which can be “parked” ; in the garage or at the airport when the Aerocar is being used on the road. Many technical noses will be lifted at Stout’s designâ€”but in the end, you can bet, we will all be riding in some contraption very similar to it. For all of Bill Stout’s inventions follow the same routine: 1. Derision by the “experts,” and, 2. Final adoption for general use a few years later.

A character and a legend in the automotive and airplane industries, he has been conducting a crusade against adherence to tradition and the formulae of the past since he graduated from the University of Minnesota thirty-five years ago. From all of which it may be gathered that Bill Stout has no overweening fondness for professorial conclusions. “Never resort to mathematics,” he once said, “until you have exhausted the possibilities of two toothpicks and a piece of string.” The key to his technique is disclosed by a motto prominently displayed on the wall of his drafting room: “SIMPLICATE AND ADD MORE LIGHTNESS.”

Called “industry’s most whimsical and unpredictable inventor” (an appellation he does not like), he is amiable, informal and easygoing, always smiling and completely free from affectation. His figure is sparse and not too strong-looking, his features lean and bony, with a thin mustache and a wild thatch of hair through which he is continually running nervous fingers. He bears a striking resemblance to Fritz Kreisler, the eminent violinist, though there is a whimsical reminder of Groucho Marx in his mouth and eyes. Characteristically midwestern and homespun, he is voluble and restless, never in a hurry and ready at any time to indulge a cracker-barrel fondness for conversation. He will talk for hours, to tycoon or laborer, on every conceivable subject, throwing off ideas with prodigal abandon.

William Bushnell Stout, to use his full handle, was born in Quincy, 111., on March 16, 1880, where his father, a semi-itinerant Methodist preacher, was temporarily anchored in the service of God. He was a frail, scrawny child, whose frequent illnesses caused despair for his survival to manhood. Still, when a critical childhood ailment laid low both Bill and his twin sister, it was the plump, husky little girl who died.

The sickly boy could not take part in the strenuous games of other children. Of all things, he wanted most to play ball with the boys, but his eyes were so bad that, as he tells it, he “couldn’t catch a balloon with handles on it.”

This early frustration drove him to making things with his hands. Wherever, in their frequent wandering, his father occupied a pulpit, Bill set up a crude workshop and embarked upon multitudinous projects, most of which remained unfinished. Thus began his experimentation with two toothpicks and a piece of string.

At high school Bill found his studies hard and the discipline irksome, but this trouble was happily solved by his transfer to the Mechanical Arts High School in St. Louis, where “Jack Knife” could pursue his already developed talent for tinkering.

Unhappy at Ham line University, where he first matriculated, Bill moved on to the University of Minnesota. With parental assistance difficult and unlikely, he was forced to support himself by running a laundry (an unsuccessful venture), by waiting on table, by teaching manual training, and by whatever other opportunities presented themselves. Once, when tending furnace for his board, he found it so unpleasant to run down five flights before dawn in the Minnesota winter that he rigged up a contraption of cords and pulley attached to the key of his alarm clock. Thus his laziness mothered the invention of one of the earliest heat-regulating devices.

About this time he began to write about the mechanical toys which he had been making since early boyhood. His first article, sent to Harper’s Young People, brought a prompt reply, a check for $12 and a request for more of the same. Spurred by this munificent sum, which paid for more than two weeks’ sustenance, he cudgeled his brain for creations to write about. Eventually, it brought in enough money to put him through college comfortably.

By 1906, when he married Alma E. Raymond, he was writing a syndicated column for the St. Paul Dispatch. The advertising department got him a motorcycle on a due bill, but this machine was so bad that Stout designed his own with many improvements, not the least of which was a better engine. He probably had the first engine with two-speed gear on a motorcycle. Eventually he became an authority on the internal combustion engine.

His articles on aviation brought an offer from the Chicago Tribune to become aviation editor. He started a magazine called Aerial Age, organized a model-plane club for boys, and contributed to two magazines concerned with automobiles, until Dave Becroft, editor of Motor Age, induced him to join the staff on a full-time basis.

Aviation was pulling Stout like a magnet. Two years later he became chief engineer of the newly formed aircraft division of the Packard Motor Car Company and worked on a plane to be powered by the new Liberty engine. After the United States entered World War I, he was called to Washington as technical adviser to the Aircraft Production Board.

Stout’s unorthodox ideas on airplane construction gave the Army big-wigs technological colic. He insisted that the exposure of struts, wires, radiators and landing gear increased wind resistance. He cited the DeHavilland 4, in which, he maintained, 237 of its 400 horsepower were wasted. If, he argued, the wing of a plane is the only part that lifts, then build thick wings with all the bracing structure inside.

The Army engineers sputtered and fumed, but, after many delays, Stout was given a contract to build the plane on a cost-plus basis. When the plane was built they threw up their hands in horror. Orville Wright, called in to check it, declared, “This is the next step in aviation.”

But the Navy was interested enough to give Stout an order for the construction of the first all-metal torpedo plane. It was completed with the financial backing of Robert Stranahan, who had already sunk money in the Batwing experiment, and Eddie Stinson made twelve successful test flights at Selfridge Field, but a Navy pilot, unfamiliar with the landing mechanism, crashed it.

That crash broke Stout financially, but it did not dim his courage. He still had his typewriter. He banged out a letter which he sent to 100 leading businessmen, explaining it was the first of a series demonstrating the principles of flight. Enclosed was a post-card with the suggestion that the reader attach a paper clip to one edge to show that the center of gravity is at the center of air pressure. “Do this experiment personally,” the letter suggested, “and it will teach you more in half an hour than a month’s, book reading. If you have any trouble getting true flight, call me up and I will bring over my trained card and clip and show you how it is done.”

Stout asked the recipients of the letters to contribute $1,000 each for the construction of a commercial all-metal plane. “You may never get a cent of your money back,” he warned, “but you will have one thousand dollars worth of fun. It’s a gamble, but you can afford it.”

More than sixty of these men responded favorably and gave Stout $118,000, with which he founded the Stout Metal Airplane Company. The result was an all-metal eight-passenger transport plane powered with a Liberty engine. He had built fifteen of these planes when Henry Ford, one of the original backers, offered to buy the company on a basis of two for one. The stock-holders demurred, but finally agreed to go along with Stout in the development of the Stout Air Services, which in four years carried 200,000 passengers between Detroit, Grand Rapids, Cleveland and Chicago without a single fatal accident, until it was bought by United Air Lines.

In 1935 Stout rocked the automobile industry with the sensation caused by his Scarab car, which had a streamlined body that looked like a giant beetle, with the engine in the rear and wheels independently sprung. It had no running board, rode on special cushions, and the interior suggested a living room. Its appearance was so startling that people would ask, “Which way is it going?”

The Scarab was not a financial success (Stout made only nine of them), but almost every one of its features has been incorporated in today’s cars.

Forced into other fields to make money, Stout built the first streamlined, lightweight, high speed, gasoline-driven fifty-passenger Railplane for the Pullman Company, which the railroad men then shelved. He designed the exterior of the Union Pacific’s famous streamlined M10001, which runs between Chicago and Denver. He built a streamlined rear-engine bus which he sold to the Gar Wood Company. He built a theater seat which slid back to let-a person pass. He constructed a brick-loading machine and an air-conditioned bed.

It has just been announced he has joined Consolidated-Vultee to work on research for light planes to be built when this war has ended. Stout sees a future of flying autos and trucks, planes which fold their wings on alighting and run along highways on their four-wheeled landing gear. He sees helicopters of new design which will fly straight up, forward, backward, and sideways, landing on rooftops, lawns, tennis courts and parking spaces.

Consolidated-Vultee has already presented for public consideration three models: the Aerocar, or flying automobile for family tours and trips; the Roadable airplane, for distance flights coupled with short trips on the ground; and the Helibus a new type of helicopter, so versatile that in addition to moving in any wanted direction it will stand still in the air and land on a tennis court.

Stout believes that the greatest progress in automotive and plane construction will come, postwar, from the aviation industry, which is not, like the automobile industry, bound down and hampered by a tremendous investment.