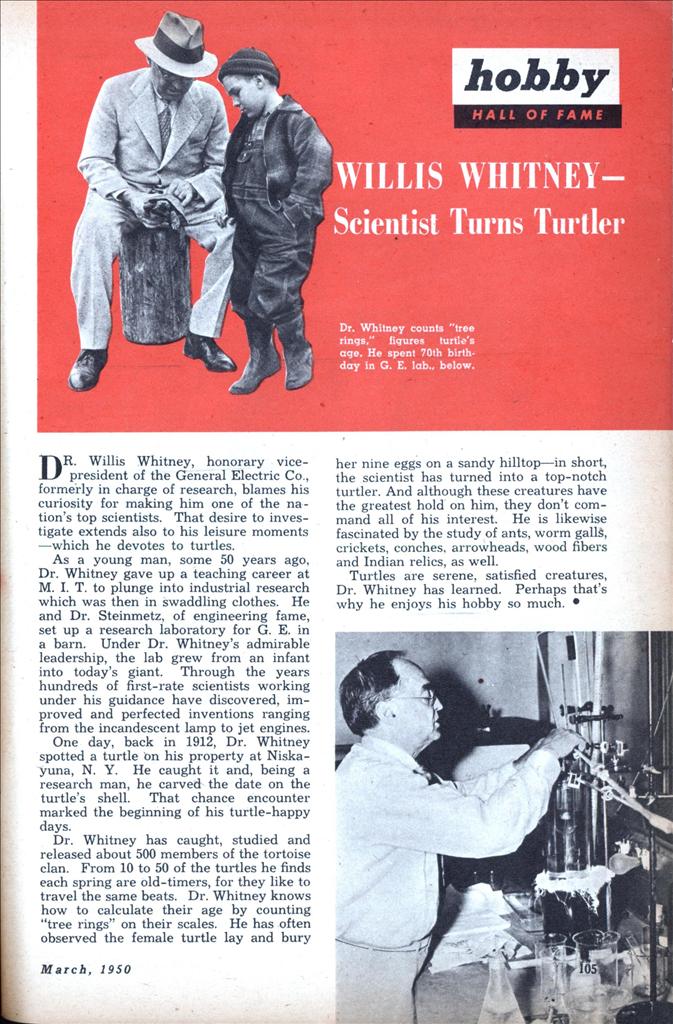 DR. Willis Whitney, honorary vice-president of the General Electric Co., formerly in charge of research, blames his curiosity for making him one of the nation’s top scientists. That desire to investigate extends also to his leisure moments —which he devotes to turtles.

As a young man, some 50 years ago, Dr. Whitney gave up a teaching career at M. I. T. to plunge into industrial research which was then in swaddling clothes. He and Dr. Steinmetz, of engineering fame, set up a research laboratory for G. E. in a barn. Under Dr. Whitney’s admirable leadership, the lab grew from an infant into today’s giant. Through the years hundreds of first-rate scientists working under his guidance have discovered, improved and perfected inventions ranging from the incandescent lamp to jet engines.

One day, back in 1912, Dr. Whitney spotted a turtle on his property at Niskayuna, N. Y. He caught it and, being a research man, he carved the date on the turtle’s shell. That chance encounter marked the beginning of his turtle-happy days.

Dr. Whitney has caught, studied and released about 500 members of the tortoise clan. From 10 to 50 of the turtles he finds each spring are old-timers, for they like to travel the same beats. Dr. Whitney knows how to calculate their age by counting “tree rings” on their scales. He has often observed the female turtle lay and bury her nine eggs on a sandy hilltop—in short, the scientist has turned into a top-notch turtler. And although these creatures have the greatest hold on him, they don’t command all of his interest. He is likewise fascinated by the study of ants, worm galls, crickets, conches, arrowheads, wood fibers and Indian relics, as well.

Turtles are serene, satisfied creatures, Dr. Whitney has learned. Perhaps that’s why he enjoys his hobby so much.