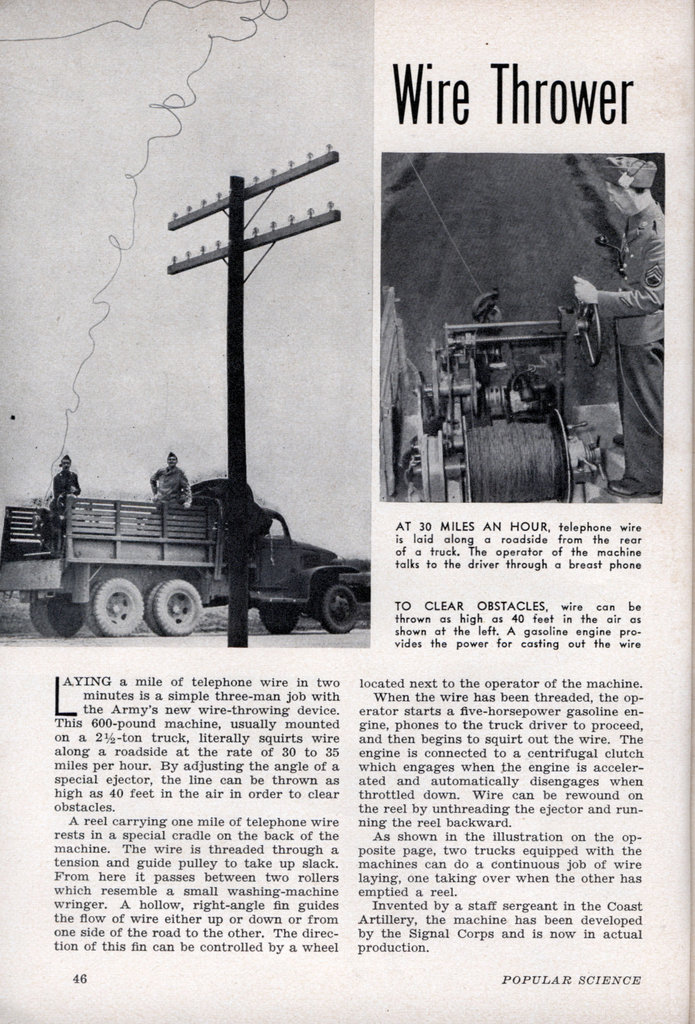 LAYING a mile of telephone wire in two minutes is a simple three-man job with the Army’s new wire-throwing device. This 600-pound machine, usually mounted on a 21/2-ton truck, literally squirts wire along a roadside at the rate of 30 to 35 miles per hour. By adjusting the angle of a special ejector, the line can be thrown as high as 40 feet in the air in order to clear obstacles.

A reel carrying one mile of telephone wire rests in a special cradle on the back of the machine. The wire is threaded through a tension and guide pulley to take up slack. From here it passes between two rollers which resemble a small washing-machine wringer. A hollow, right-angle fin guides the flow of wire either up or down or from one side of the road to the other. The direction of this fin can be controlled by a wheel located next to the operator of the machine.

When the wire has been threaded, the operator starts a five-horsepower gasoline engine, phones to the truck driver to proceed, and then begins to squirt out the wire. The engine is connected to a centrifugal clutch which engages when the engine is accelerated and automatically disengages when throttled down. Wire can be rewound on the reel by unthreading the ejector and running the reel backward.

As shown in the illustration on the opposite page, two trucks equipped with the machines can do a continuous job of wire laying, one taking over when the other has emptied a reel.

Invented by a staff sergeant in the Coast Artillery, the machine has been developed by the Signal Corps and is now in actual production.