Wired for Sin – THE VICE RACKET BEHIND THOSE PHONE ANSWERING SERVICES (Feb, 1958) 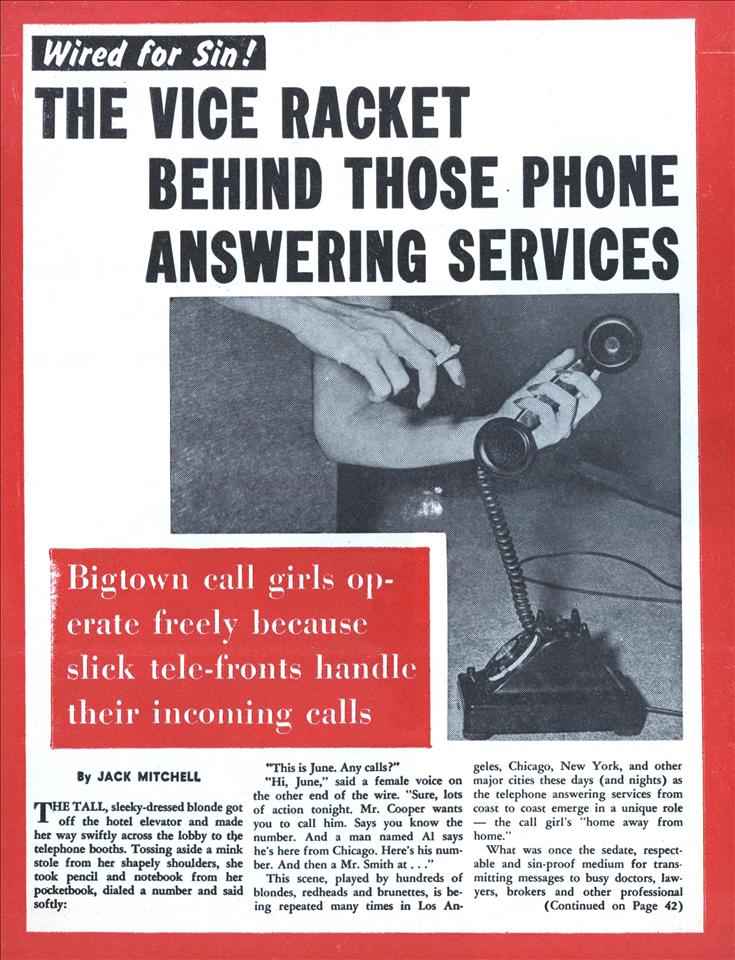 Wired for Sin – THE VICE RACKET BEHIND THOSE PHONE ANSWERING SERVICES

THE TALL, sleeky-dressed blonde got off the hotel elevator and made her way swiftly across the lobby to the telephone booths. Tossing aside a mink stole from her shapely shoulders, she took pencil and notebook from her pocketbook, dialed a number and said softly: “This is June. Any calls?”

“Hi, June,” said a female voice on the other end of the wire. “Sure, lots of action tonight. Mr. Cooper wants you to call him. Says you know the number. And a man named Al says he’s here from Chicago. Here’s his number. And then a Mr. Smith at…”

This scene, played by hundreds of blondes, redheads and brunettes, is being repeated many times in Los Angeles, Chicago, New York, and other major cities these days (and nights) as the telephone answering services from coast to coast emerge in a unique role — the call girl’s “home away from home.”

What was once the sedate, respectable and sin-proof medium for transmitting messages to busy doctors, lawyers, brokers and other professional men has blossomed into a bustling business for the dollar doves and scarlet Sadies who have at last found a cop-free method of plying their trade.

The public had little inkling of this role of the conventional answering service in the cuddle-for-cash trade until Nella Bogart, an admitted call girl, told the New York jury that subsequently acquitted her that she made as high as $500 weekly using a service switchboard that cost her $20 a month.

Despite this startling revelation, there was no flurry of activity on the part of hundreds of answering services to discontinue suspected “clients.” Trade went on as usual after Nella’s testimony exploded like an H-bomb on the front pages. Even the vice cops shrugged their collective shoulders from Boston to San Francisco. There’s little they can do about this, for the ladies of the evening have come up with a virtually tap-proof formula for evading the law.

TAP-PROOF FORMULA What’s more, this electronic “home away from home” is inexpensive, dependable and has the added factor of reassuring the “John” (the name call girls give their customers) that a squad of detectives won’t be listening in when he dials his play-for-pay doxie.

For an on-the-spot account of how this new sin-with-safety program works, TOP SECRET interviewed several service switchboard owners, message girls and even a soiled dove who had married one of her “Johns” and settled down to being an honest woman.

We’ll call her Angella because she’s now a popular young matron in a neat Long Island community. But not long ago she was one of Miami’s most successful call girls.

“I was bugged twice for pros (arrested for prostitution)” Angella told this reporter. “The cops got me on a wire tap. Then I tried the answering service.

“I didn’t even go to their office in downtown Miami. They didn’t ask any questions such as my address and home phone. They explained the charge was $18 a month and I sent them a money-order. It was as simple as that.”

“Didn’t they want to know your occupation?”

“No. I told them I was a model. They seemed satisfied. It worked fine and I never had any trouble. The cops can’t put on a phone tap because the girl always calls from a pay phone and even if they try to trace her call back, she’s gone by the time they get there. What’s more, the bulls are leery of fooling around with the answering services — most of them have plenty of respectable clients.”

A “headset” or message girl who worked the 4 p.m. to midnight shift for a West Coast switchboard service said during her fourteen months on the job “at least twenty call girls were clients of my outfit.”

“I got to know them all pretty well,” she told TOP SECRET. “Their voices, their habits, their regular customers, the guys they liked and the ones they didn’t want to see. I used to give them little extra services and most of them asked for my home address and sent me a ten or twenty dollar bill every month as a tip. Since I made a buck an hour on the switchboard, those tips came in handy.”

She shrugged. “They could afford it. Some of the girls would get a dozen messages during my eight-hour shift. At $20 to $50 a call, I could figure out they made plenty.

“One girl named Joan had a friend who used to come down every two weeks from Portland. He’d never fail to call about 9 a.m. and ask the girl on the morning shift for Joan’s home phone. She told him we didn’t have it, which was the truth. Then he’d ask for Joan’s address. We didn’t have that either. We knew he wasn’t a copper, but every answering service has one rule that never changes: Even if we have a home phone and address, we must never give it out.

DAY STARTS AT 3 “Most of the call girls give us only their first names and usually send in their monthly payment either by money order (using a phoney surname) or cash.”

“Don’t you keep a record on them.”

“Sure,” said the message girl. “A file card with the name ‘June’ or ‘Margie’ or whatever it is and the occupation which usually is ‘model.’ Sometimes instructions such as ‘will call for messages after 3 p.m.’ Most call girls sleep until then and the bulk of their business is done in the late afternoon and evening.”

“Pretty much the same pattern,” said the switchboard service operator. “By time she’s awake and calls in, we usually have half a dozen messages for her. The more messages, the greater her success in her trade, so to speak. The prostitute who gets only one or two a day I figure is either getting too old or too lazy.

“Most messages just give first names of the ‘Johns’ and their phone. A fellow named Joe wants her to call room 506 at his hotel at 6 p.m. That means his wife won’t be back until late. Carl wants her to call him back. Says she knows the number. A fellow named Jimmy says he’s a friend of George’s and to call him at his hotel. Most call girls are leery of this ‘friend of a friend’ business and tell me to forget the message.”

The switchboard operator said in only one case in her experience did a call girl leave a home phone. “Most of them are scared to death of wire taps and use phone booths. When they get through with one job, they just go to a public phone and call me.”

A Washington switchboard service owner said he felt certain some of his feminine clients were soiled doves. “But I’m not a cop,” he said. “And about half my revenue comes from ladies who never tell us much about themselves. I’m not breaking any laws by giving them telephone service and I don’t intend to. If the cops want to investigate, I won’t stand in their way. But I’ve never seen these clients and probably never will.”

A New York vice officer pointed out that one of the evils of the “home away from home” switchboard service is that by its very nature, it blocks police efforts to round up the call girls.

“Suppose we go after a subscriber who really is a model?” he said. “Then we have an invasion of privacy suit against the city on our hands, to say nothing of the howls about civil liberties that would go up. We get into enough trouble with wire taps. Tracking down an answering service client and proving that she uses the telephone to engage in prostitution is mighty tough.”

To prove his point, the Nella Bogart and Pat Ward cases are among the very few on record where call girls admitted using an answering service. Pat Ward, the best known dollar dove in the famous Mickey Jelke case, said the oleo heir (who was convicted) told her: “The first thing a call girl needed was an answering service.”

And, interestingly enough, Pat’s use of a switchboard service did not figure in the evidence. Despite her disclosure, nothing was done to investigate the hundreds of answering services that take up ten pages in the New York City classified telephone directory.

Of the arrests made each year in the major cities for prostitution, nine out of ten of the play-for-pay pretties are streetwalkers or bar girls who solicit business. The smart call girl scorns such a practice. Not only does it pay low — as little as five dollars a customer — but the chances of arrest are greatly increased.

The call girl who can make as high as $500 a week also has another factor working for her — the changed attitude of judges, social welfare agencies and others towards prostitution.

Chief Magistrate John M. Murtagh of New York recently proposed that the local vice squad be abolished and a “live and let live” policy be adopted toward the city’s sin sisters.

This promptly brought a retort from Police Commissioner Stephen P. Kennedy that his force would “keep after the prostitutes.”

The latter directive is going to take a lot of doing. With her address and home telephone known only to herself, the successful call girl can go through her lifetime of selling sex by the hour with little fear of arrest — thanks to that switchboard service.

Vice officers in one mid-western city tried to put the heat on the “Johns.” Seizing a bunch of messages at one answering service, the cops contacted the girl’s customers, demanding to know where the girl lived. Unanimously her “clients” told the bluecoats that they hadn’t the vaguest idea. They had never been in her home, knew only the number she gave them — the answering service. Convinced the “Johns” were telling the truth, the cops tried to plant a message, sending two officers to a hotel with instructions to call the switchboard and leave word for the cuddle-for-cash lass to buzz “John and Al.”

But the $20 monthly tip the lady of the evening sent her friend on the switchboard paid off. When she checked in, the message-taker slipped her the word that the cops had been in and were on the prowl. The call girl took the next plane for Miami and plied her trade there for a couple of months. When she returned, it was simple to contact her favorite operator again and leave a code name.

At this writing, she is averaging between $350 and $500 a week and the vice squad is still looking for her.

As one veteran law enforcement officer summed it up: “These answering services have many legitimate clients. They have no information on those they suspect are call girls. They can’t help us too much. Even the 100-per-cent honest managers have no proof to offer us. So it’s a war of communications and right now the call girls are winning hands down.”