This kind of thing is much cooler when Les Paul lives in your building. 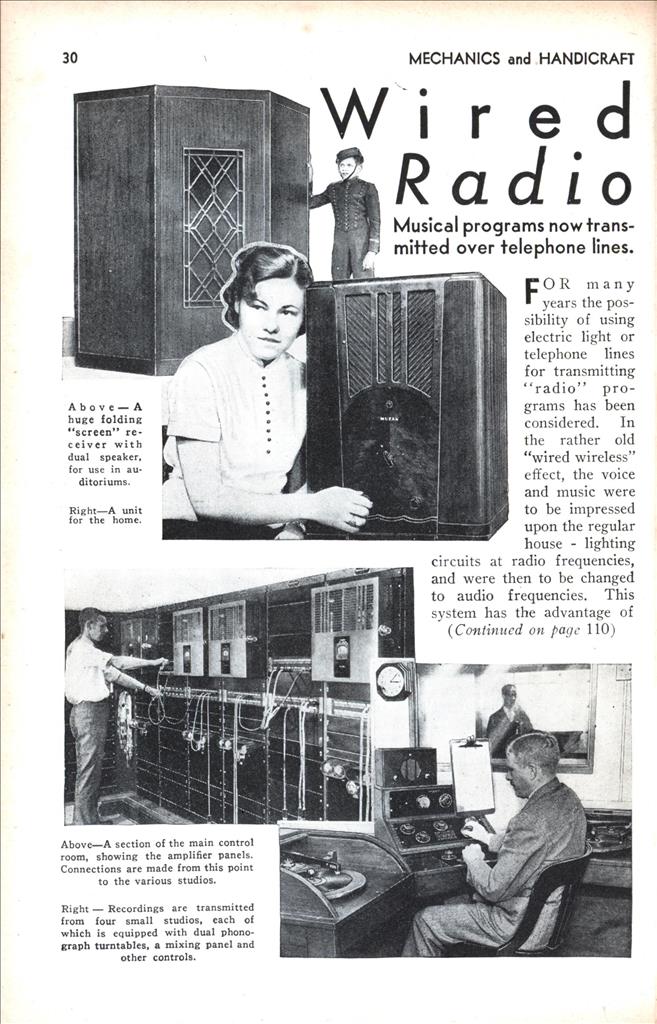 FOR many years the possibility of using electric light or telephone lines for transmitting “radio” programs has been considered. In the rather old “wired wireless” effect, the voice and music were to be impressed upon the regular house – lighting circuits at radio frequencies, and were then to be changed to audio frequencies. This system has the advantage of never being interfered with by loud crashes of static, which ruin many a program in the summer months. Also, in view of the fact that people would subscribe to this form of service, all advertising was to be eliminated from the program. In the latest development, which has been installed by many large hotels (including the Waldorf-Astoria in New York), telephone lines are used for the transmission of the music which goes forth at audio frequencies. A leading chain-grocery store system has installed it in fifty of their stores. A well-balanced musical program, without advertising of any kind, is available 24 hours of the day on several of the channels to which the receiver can be “tuned.” One of the channels, however, will be used for advertising only; thus the announcer at the central office can call attention to the various bargains which the housewife can get in the chain grocery and also suggest meals for the day, their manner of preparation and treatment, and give general household hints and helps. Naturally, the program is static-free, and will come as a boon to those who are willing to pay a small fee rather than have the radio announcer grate on the ear with objectionable advertising.