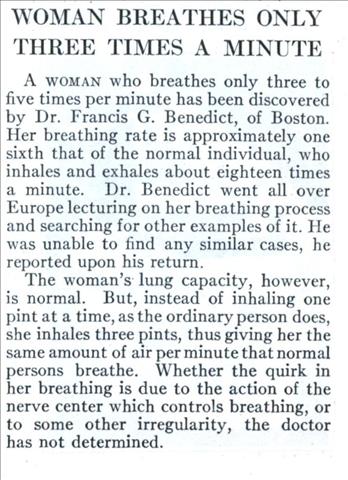 A woman who breathes only three to five times per minute has been discovered by Dr. Francis G. Benedict, of Boston. Her breathing rate is approximately one sixth that of the normal individual, who inhales and exhales about eighteen times a minute. Dr. Benedict went all over Europe lecturing on her breathing process and searching for other examples of it. He was unable to find any similar cases, he reported upon his return.

The woman’s lung capacity, however, is normal. But, instead of inhaling one pint at a time, as the ordinary person does, she inhales three pints, thus giving her the same amount of air per minute that normal persons breathe. Whether the quirk in her breathing is due to the action of the nerve center which controls breathing, or to some other irregularity, the doctor has not determined.