In the next issue: “Woman Scientist’s Invention Makes Water Wet!” 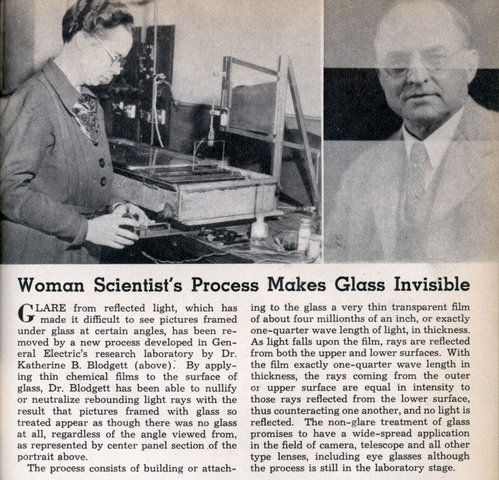 GLARE from reflected light, which has made it difficult to see pictures framed under glass at certain angles, has been removed by a new process developed in General Electric’s research laboratory by Dr. Katherine B. Blodgett (above).” By applying thin chemical films to the surface of glass, Dr. Blodgett has been able to nullify or neutralize rebounding light rays with the result that pictures framed with glass so treated appear as though there was no glass at all, regardless of the angle viewed from, as represented by center panel section of the portrait above.

The process consists of building or attach-ing to the glass a very thin transparent film of about four millionths of an inch, or exactly one-quarter wave length of light, in thickness. As light falls upon the film, rays are reflected from both the upper and lower surfaces. With the film exactly one-quarter wave length in thickness, the rays coming from the outer or upper surface are equal in intensity to those rays reflected from the lower surface, thus counteracting one another, and no light is reflected. The non-glare treatment of glass promises to have a wide-spread application in the field of camera, telescope and all other type lenses, including eye glasses although the process is still in the laboratory stage.