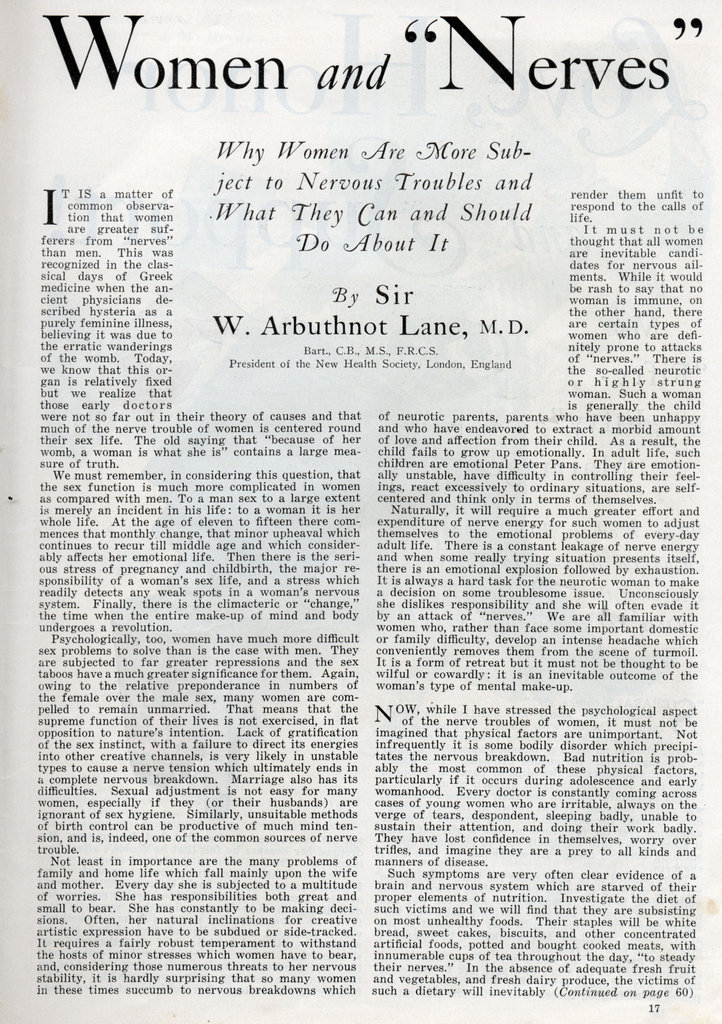 IT IS a matter of common observation that women are greater sufferers from “nerves” than men. This was recognized in the classical days of Greek medicine when the ancient physicians described hysteria as a purely feminine illness, believing it was due to the erratic wanderings of the womb. Today, we know that this organ is relatively fixed but we realize that those early doctors were not so far out in their theory of causes and that much of the nerve trouble of women is centered round their sex life. The old saying that “because of her womb, a woman is what she is” contains a large measure of truth.

We must remember, in considering this question, that the sex function is much more complicated in women as compared with men. To a man sex to a large extent is merely an incident in his life: to a woman it is her whole life. At the age of eleven to fifteen there commences that monthly change, that minor upheaval which continues to recur till middle age and which considerably affects her emotional life. Then there is the serious stress of pregnancy and childbirth, the major responsibility of a woman’s sex life, and a stress which readily detects any weak spots in a woman’s nervous system. Finally, there is the climacteric or “change,” the time when the entire make-up of mind and body undergoes a revolution.

Psychologically, too, women have much more difficult sex problems to solve than is the case with men. They are subjected to far greater repressions and the sex taboos have a much greater significance for them. Again, owing to the relative preponderance in numbers of the female over the male sex, many women are compelled to remain unmarried. That means that the supreme function of their lives is not exercised, in flat opposition to nature’s intention. Lack of gratification of the sex instinct, with a failure to direct its energies into other creative channels, is very likely in unstable types to cause a nerve tension which ultimately ends in a complete nervous breakdown. Marriage also has its difficulties. Sexual adjustment is not easy for many women, especially if they (or their husbands) are ignorant of sex hygiene. Similarly, unsuitable methods of birth control can be productive of much mind tension, and is, indeed, one of the common sources of nerve trouble.

Not least in importance are the many problems of family and home life which fall mainly upon the wife and mother. Every day she is subjected to a multitude of worries. She has responsibilities both great and small to bear. She has constantly to be making decisions. Often, her natural inclinations for creative artistic expression have to be subdued or side-tracked. It requires a fairly robust temperament to withstand the hosts of minor stresses which women have to bear, and, considering those numerous threats to her nervous stability, it is hardly surprising that so many women in these times succumb to nervous breakdowns which render them unfit to respond to the calls of life.

It must not be thought that all women are inevitable candidates for nervous ailments. While it would be rash to say that no woman is immune, on the other hand, there are certain types of women who are definitely prone to attacks of “nerves.” There is the so-called neurotic or highly strung woman. Such a woman is generally the child of neurotic parents, parents who have been unhappy and who have endeavored to extract a morbid amount of love and affection from their child. As a result, the child fails to grow up emotionally. In adult life, such children are emotional Peter Pans. They are emotionally unstable, have difficulty in controlling their feelings, react excessively to ordinary situations, are self-centered and think only in terms of themselves.

Naturally, it will require a much greater effort and expenditure of nerve energy for such women to adjust themselves to the emotional problems of every-day adult life. There is a constant leakage of nerve energy and when some really trying situation presents itself, there is an emotional explosion followed by exhaustion. It is always a hard task for the neurotic woman to make a decision on some troublesome issue. Unconsciously she dislikes responsibility and she will often evade it by an attack of “nerves.” We are all familiar with women who, rather than face some important domestic or family difficulty, develop an intense headache which conveniently removes them from the scene of turmoil. It is a form of retreat but it must not be thought to be wilful or cowardly: it is an inevitable outcome of the woman’s type of mental make-up.

‘V[OW, while I have stressed the psychological aspect -L^ of the nerve troubles of women, it must not be imagined that physical factors are unimportant. Not infrequently it is some bodily disorder which precipitates the nervous breakdown. Bad nutrition is probably > the most common of these physical factors, particularly if it occurs during adolescence and early womanhood. Every doctor is constantly coming across cases of young women who are irritable, always on the ¦ verge of tears, despondent, sleeping badly, unable to sustain their attention, and doing their work badly. They have lost confidence in themselves, worry over trifles, and imagine they are a prey to all kinds and manners of disease.

Such symptoms are very often clear evidence of a brain and nervous system which are starved of their proper elements of nutrition. Investigate the diet of such victims and we will find that they are subsisting on most unhealthy foods. Their staples will be white bread, sweet cakes, biscuits, and other concentrated artificial foods, potted and bought cooked meats, with innumerable cups of tea throughout the day, “to steady their nerves.” In the absence of adequate fresh fruit and vegetables, and fresh dairy produce, the victims of such a dietary will inevitably (Continued on page 60) be constipated. Now, nerve tissue is peculiarly sensitive to any circulating poison in the blood stream; and the constant draining of poisons from the constipated bowel, from septic teeth or gums, or from the nose and throat, has a most exhausting effect upon the entire nervous system.

There is one factor in the production of nervous breakdown which requires special comment, namely, overwork. With the public, it is a favorite cause of nerve trouble. Actually, it is doubtful if overwork is ever the sole or even the underlying cause of a true nervous breakdown. Overwork is naturally a very popular causal factor for it is obviously highly respectable and even commendable! It takes away responsibility from the person concerned.

When we investigate, we generally find that the complaint of overwork is really a symptom of an already existent nervous exhaustion. When a woman is tired and low-spirited, her work and duties seem to magnify a .hundredfold to her weary brain. The more she worries the greater does the mountain of overwork appear to her. She gets sleepless nights and unpleasant” dreams, her nerves are on edge and “all is dark within.” Clearly, the “overwork” is relative to a pre-existent weary nervous system. The fundamental cause is not in the overwork but is within her own mind. Some gnawing fear which the conscious mind will not recognize, some conflict between opposing desires, some profound dissatisfaction with her marital, her family or her occupational life—in such factors as these will the root cause of the nervous exhaustion be found.

Great effort of mind or body can, of course, produce some degree of exhaustion, but the human organism is well able to look after itself and such exhaustion is rapidly dispelled with rest. In neurasthenia, there is a constant “always tired” feeling which incapacitates the sufferer from facing up to life. The neurasthenic woman is unhappy: she experiences numerous unpleasant symptoms, pressure on top of the head, tremblings, dyspepsia, sleeplessness, and she has an acute sense of her shortcomings. She knows that her fears are groundless but is unable to make the effort to overcome them.

Another common nervous complaint in women is the anxiety state. It arises in the neurotic type of women when confronted with some threat to their sexual, economic or family security. The symptoms are legion, from fears of insanity to palpitations, tremblings and sweatings. It is fear which is the fundamental motive of all the symptoms and signs, a fear which may be unknown or which cannot be faced by the conscious mind. Until the ghost of this fear is laid, the state of anxiety will persist.

HYSTERIA as we have already noted is one of the major nerve troubles of women, although it is not exclusive to the female sex as was once imagined. There is definitely an hysterical type, the woman who is easily emotional, weeps and laughs on the least provocation, who has a desire to be theatrical and who has a morbid craving for sympathy. When such a woman is threatened with some social situation which is distasteful to her she very readily develops an hysterical attack. * This may take an endless variety of forms, paralysis, tremors, deafness, speechlessness, blindness, trances, or wandering fits.

Now, it is essential to understand that all those symptoms of “nerves” which have been described are not “just imaginary.” They are intensely real to the suffering woman who is fundamentally unhappy and badly adjusted to some aspect of her life. The “nervous woman” is not an impostor. She certainly clings to her illness but only because she is afraid. To adopt an attitude of blame is not only futile but is definitely harmful. The neurotic woman is largely the victim of her early environment, the victim of parental mishandling.

What the neurotic type must endeavor to do, is to grow up emotionally. She must gain the mastery of her feelings, and direct them in an adult, not a childish way. This is easy to say to the nerve-racked woman but difficult for her to realize. Still it is possible by sympathetic discussion to help her to an understanding of the root cause of her nervous illness. What is imperative is that nervous troubles should not be permitted to get firmly established. In their early stages, the outlook is generally good, provided sound treatment is carried out by an expert in this branch of medicine. The sufferer from “nerves” will not find the remedy in a “bottle of strengthening medicine.” The cause lies within the patients mind and until the cause is eradicated no hope of recovery can be sustained. The tyranny of “nerves” is the greatest of all human tyrannies and as such it deserves the greatest of our efforts if it is to be conquered.