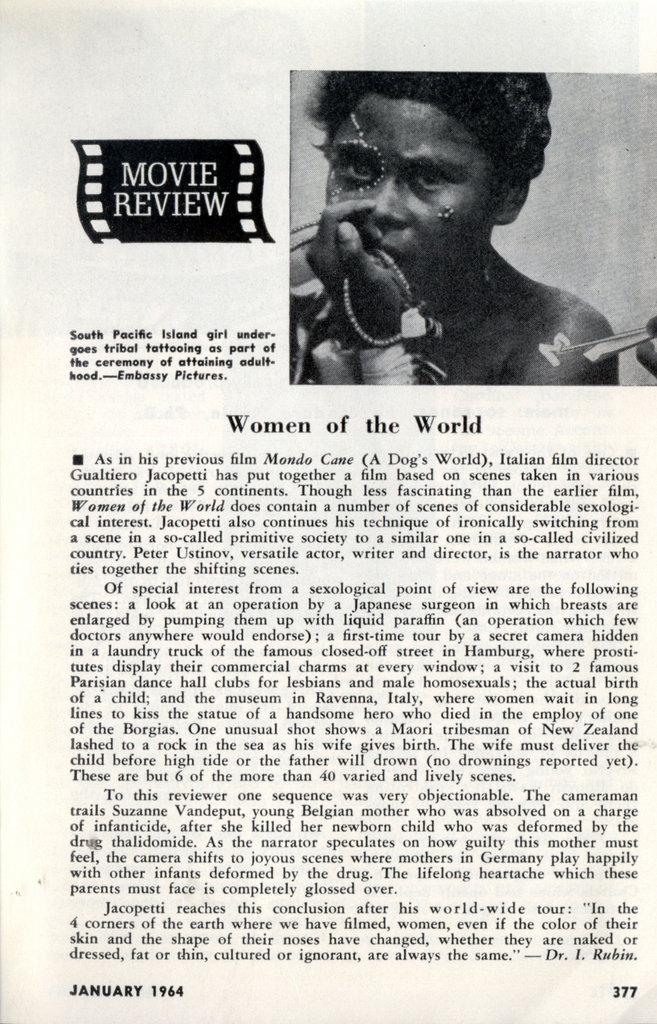 Women of the World

As in his previous film Mondo Cane (A Dogs World), Italian film director Gualtiero Jacopetti has put together a film based on scenes taken in various countries in the 5 continents. Though less fascinating than the earlier film, Women of the World does contain a number of scenes of considerable sexological interest. Jacopetti also continues his technique of ironically switching from a scene in a so-called primitive society to a similar one in a so-called civilized country. Peter Ustinov, versatile actor, writer and director, is the narrator who ties together the shifting scenes.

Of special interest from a sexological point of view are the following scenes: a look at an operation by a Japanese surgeon in which breasts are enlarged by pumping them up with liquid paraffin (an operation which few doctors anywhere would endorse); a first-time tour by a secret camera hidden in a laundry truck of the famous closed-off street in Hamburg, where prostitutes display their commercial charms at every window; a visit to 2 famous Parisian dance hall clubs for lesbians and male homosexuals; the actual birth of a child; and the museum in Ravenna, Italy, where women wait in long lines to kiss the statue of a handsome hero who died in the employ of one of the Borgias. One unusual shot shows a Maori tribesman of New Zealand lashed to a rock in the sea as his wife gives birth. The wife must deliver the child before high tide or the father will drown (no drownings reported yet). These are but 6 of the more than 40 varied and lively scenes.

To this reviewer one sequence was very objectionable. The cameraman trails Suzanne Vandeput, young Belgian mother who was absolved on a charge of infanticide, after she killed her newborn child who was deformed by the drug thalidomide. As the narrator speculates on how guilty this mother must feel, the camera shifts to joyous scenes where mothers in Germany play happily with other infants deformed by the drug. The lifelong heartache which these parents must face is completely glossed over.

Jacopetti reaches this conclusion after his world-wide tour: “In the 4 corners of the earth where we have filmed, women, even if the color of their skin and the shape of their noses have changed, whether they are naked or dressed, fat or thin, cultured or ignorant, are always the same.” — Dr. I. Rubin.