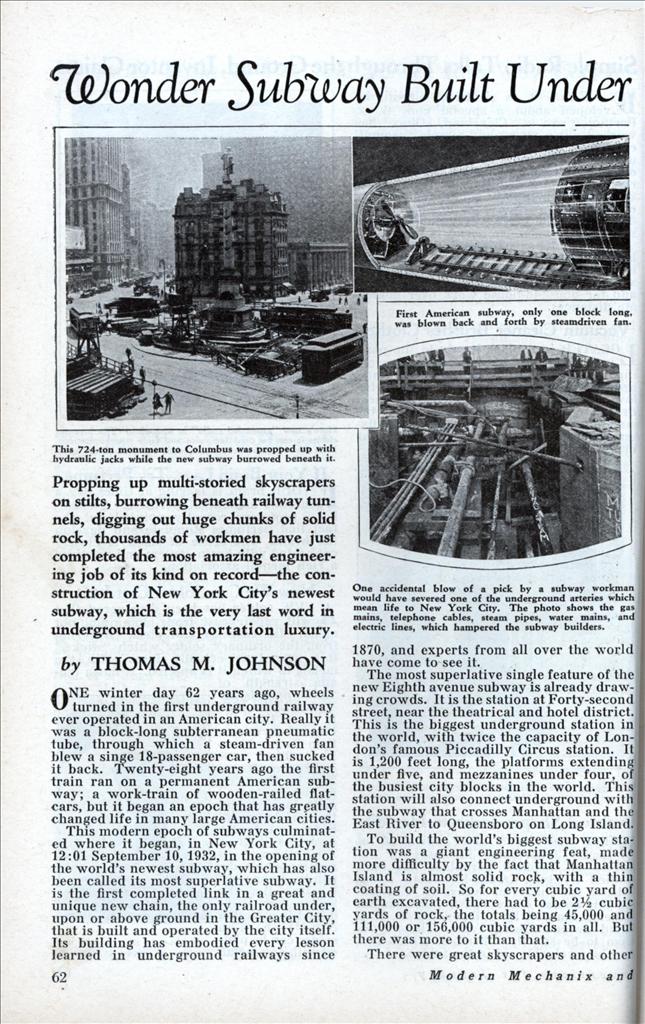 Propping up multi-storied skyscrapers on stilts, burrowing beneath railway tunnels, digging out huge chunks of solid rock, thousands of workmen have just completed the most amazing engineering job of its kind on record—the construction of New York City’s newest subway, which is the very last word in underground transportation luxury.

ONE winter day 62 years ago, wheels turned in the first underground railway ever operated in an American city. Really it was a block-long subterranean pneumatic tube, through which a steam-driven fan blew a singe 18-passenger car, then sucked it back. Twenty-eight years ago the first train ran on a permanent American subway; a work-train of wooden-railed flat-cars, but it began an epoch that has greatly changed life in many large American cities. This modern epoch of subways culminated where it began, in New York City, at 12:01 September 10,1932, in the opening of the world’s newest subway, which has also been called its most superlative subway. It is the first completed link in a great and unique new chain, the only railroad under, upon or above ground in the Greater City, that is built and operated by the city itself. Its building has embodied every lesson learned in underground railways since 1870, and experts from all over the world have come to see it.

The most superlative single feature of the new Eighth avenue subway is already drawing crowds. It is the station at Forty-second street, near the theatrical and hotel district. This is the biggest underground station in the world, with twice the capacity of London’s famous Piccadilly Circus station. It is 1,200 feet long, the platforms extending under five, and mezzanines under four, of the busiest city blocks in the world. This station will also connect underground with the subway that crosses Manhattan and the East River to Queensboro on Long Island To build the world’s biggest subway station was a giant engineering feat, made more difficulty by the fact that Manhattan Island is almost solid rock, with a thin coating of soil. So for every cubic yard of earth excavated, there had to be 2-1/2 cubic yards of rock, the totals being 45,000 and 111,000 or 156,000 cubic yards in all. But there was more to it than that.

There were great skyscrapers and other smaller buildings to be underpinned so they would not fall crashing into the pit, and a myriad sorts of accidents to be averted by careful handling of the water mains, sewer lines, gas pipes, power cables (of which there were 100) and 15,000 pairs of telephone cables. Then once these dangers had been met and the hole safely dug, into it had to go 15,795 cubic yards of concrete, and 4,000 tons of structural steel. And that was only one station of the 28 on the new subway.

In the finished Forty-second street station are several features that are superlatively new. There is a new lighting system, to eliminate shadows entirely in this thronging crossroads underground. There is improved ventilation. There are no curved station platforms, all are straight-edged, to cut down accidents, especially to passengers slipping as they get on and off trains. There is a new plan of wall decoration, with tile in colors varying with the parts of the route, to help prevent passengers missing their stations.

For the passengers, also, has been developed what transit experts say is the most superlative subway car in the world. It was designed by a picked board, who were told: “Here, fix us up the best car that runs underground. Go the limit.”

The result is the dark-green steel car, painted “City of New York,” of which 300 are now roaring up and down the subterranean galleries. Each car is 60-1/2 feet long, 10 feet wide, and 12 feet high. There are five fans in the ceiling, and ventilation shutters so arranged that air passes continuously in one side, and out the other. The car is lighted by 22 bulbs, each wired independently, and four emergency bulbs, which go on when power goes off. All bulbs are “left-handed”—a mean trick on pilferers.

But to the passenger, be he visitor or New Yorker, the greatest improvement will seem to be that he can get on and off the new cars more quickly than the old—which, of course, means shorter waits at stations, and quicker runs. Although the new cars are seven feet shorter than the type hitherto newest, they can be loaded and unloaded in one-third less time. And they hold 40 per cent more passengers than the cars still running on the original I. R. T. New York subway. Of the 280 passengers a new car will hold, only sixty will be seated, while 220 stand, and of the 220 only 52 will have the support of the white porcelain grips or stanchions.

But to compensate for this “standing room mostly” which New Yorkers have come to consider unavoidable, there are four pairs of doors on each side of each car, permitting entrance or exit in eight hies or lines. Also injury to passengers caught in closing doors is minimized by rubber cushioned edges, and a device that makes the door stop, but not, as in older cars, rebound. The cars have no vestibules. They cost $38,000 each.

Another wonder is the achievement in underpinning. The builders of the new-subway had to prop up every sort of building, from two-story dwellings, to the newest steel skyscrapers. Yet all the time the occupants went placidly about their affairs, often ignorant that deep in the bowels of the earth beneath them, their buildings were being “put on stilts.” The monument to Columbus at the entrance to Central Park is 75 feet high and weighs 724 tons, but it was easily picked up and reset atop a new pedestal resting upon the Eighth avenue subway.

Far more difficult was the crossing of three existing subways. These had to be underpinned securely, without interrupting trains, while beneath, men dug the tube.