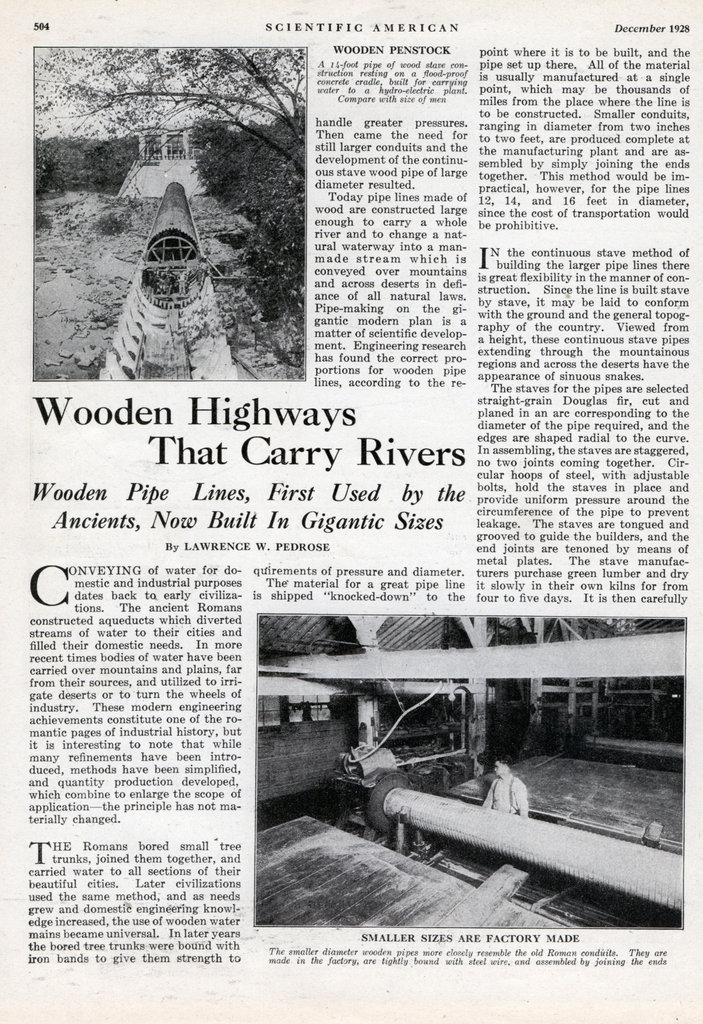 CONVEYING of water for domestic and industrial purposes dates back to early civilizations. The ancient Romans constructed aqueducts which diverted streams of water to their cities and filled their domestic needs. In more recent times bodies of water have been carried over mountains and plains, far from their sources, and utilized to irrigate deserts or to turn the wheels of industry. These modern engineering achievements constitute one of the romantic pages of industrial history, but it is interesting to note that while many refinements have been introduced, methods have been simplified, and quantity production developed, which combine to enlarge the scope of applicationâ€”the principle has not materially changed.

THE Romans bored small tree trunks, joined them together, and carried water to all sections of their beautiful cities. Later civilizations used the same method, and as needs grew and domestic engineering knowledge increased, the use of wooden water mains became universal. In later years the bored tree trunks were bound with iron bands to give them strength to handle greater pressures. Then came the need for still larger conduits and the development of the continuous stave wood pipe of large diameter resulted.

Today pipe lines made of wood are constructed large enough to carry a whole river and to change a natural waterway into a man-made stream which is conveyed over mountains and across deserts in defiance of all natural laws. Pipe-making on the gigantic modern plan is a matter of scientific development. Engineering research has found the correct proportions for wooden pipe lines, according to the requirements of pressure and diameter.

The material for a great pipe line is shipped “knocked-down” to the point where it is to be built, and the pipe set up there. All of the material is usually manufactured at a single point, which may be thousands of miles from the place where the line is to be constructed. Smaller conduits, ranging in diameter from two inches to two feet, are produced complete at the manufacturing plant and are assembled by simply joining the ends together. This method would be impractical, however, for the pipe lines 12, 14, and 16 feet in diameter, since the cost of transportation would be prohibitive.

IN the continuous stave method of building the larger pipe lines there is great flexibility in the manner of construction. Since the line is built stave by stave, it may be laid to conform with the ground and the general topography of the country. Viewed from a height, these continuous stave pipes extending through the mountainous regions and across the deserts have the appearance of sinuous snakes.

The staves for the pipes are selected straight-grain Douglas fir, cut and planed in an arc corresponding to the diameter of the pipe required, and the edges are shaped radial to the curve. In assembling, the staves are staggered, no two joints coming together. Circular hoops of steel, with adjustable bolts, hold the staves in place and provide uniform pressure around the circumference of the pipe to prevent leakage. The staves are tongued and grooved to guide the builders, and the end joints are tenoned by means of metal plates. The stave manufacturers purchase green lumber and dry it slowly in their own kilns for from four to five days. It is then carefully graded and put through the sticker machines which, in a single operation, cut the staves to conform to the desired pipe diameter complete with tongue and groove; and then plane them. Then the ends are trimmed and they are again rigidly inspected. The next step is creosoting. The staves are placed in a vacuum at varying temperatures, and approximately eight pounds of preservative oils is injected into each cubic foot of wood. These creosoted staves have virtually unlimited life.

WHERE the smaller, wire-wrapped pipe is constructed, the staves are laid by hand, held in place with bands, and placed in a wire winding machine where a heavy galvanized wire is wound round the pipe under pressure. The wire bites slightly into the wood. The pipe is then rolled to an automatic heading machine which puts on the head. The completed pipe goes to a dipping bath where it is given an exterior coating of coal tar and asphalt mixture, after which it is rolled in sawdust. The final step in manufacture is the putting on of the coupling under steam pressure.

Among recent installations of continuous wood stave pipe of spectacular proportions were a line 16 feet in diameter in California; a triple line of 13-foot pipes which divert, for hydroelectric purposes, the entire flow of the Androscoggin River in New Hampshire; a 14-foot pipe line in Montana; a 9-foot pipe line in northern Canada; a 6-foot pipe line in Spain; a 4-foot installation in Japan; and a 3-foot line in Cuba. How the wood pipe industry aids other

521,933 pounds of malleable iron shoes. The wood pipe finds a wide variety of uses. While the larger installations are for hydro-electric power projects, municipal water mains, and irrigation systems, the pipes are used widely in hydraulic mining, drainage of mines, steam lines, surge tanks, sewers, road’ culverts, et cetera. The reasons for the Use of wooden pipe lines where great volumes of water must be carried long distances is obvious. Steel pipes, made up of rings riveted together, would be too expensive, and concrete pipe lines, to be strong enough, would have to be very thick and their construction would entail the use of too-complicated forms.