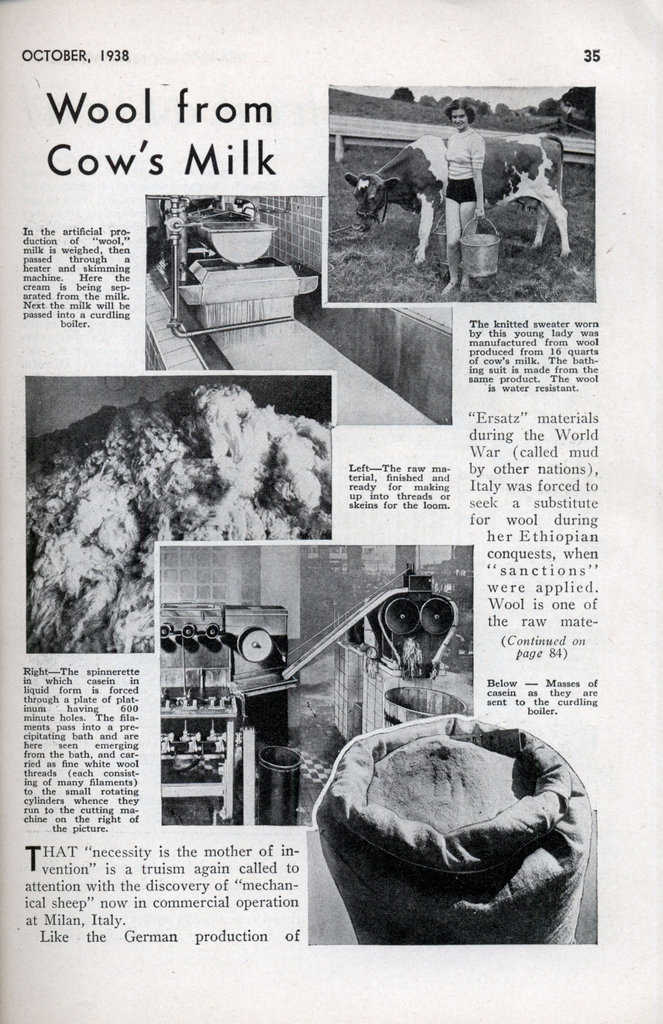 THAT “necessity is the mother of invention” is a truism again called to attention with the discovery of “mechanical sheep” now in commercial operation at Milan, Italy. Like the German production of “Ersatz” materials during the World War (called mud by other nations), Italy was forced to seek a substitute for wool during her Ethiopian conquests, when “sanctions” were applied. Wool is one of the raw materials for which Italy depends almost entirely upon foreign countries. When foreign countries “refused” to sell wool to the “aggressor,” scientists strained to develop a substitute; and now, two years after the discovery of the method, a most satisfactory product is being produced in vast quantities, by one of the worlds’ largest rayon companies.

Essentially, the process consists of passing skimmed milk into a curdling boiler, where there is a coagulation of the casein found in the milk. The casein is pressed out in a filter. The extracted whey (the curds and whey of nursery rhyme fame) is not thrown away, but instead, its acidity is neutralized and it is fed to pigs, or used for the extraction of milk sugar, the preparation of lactic acid, etc. After washing, the casein is broken up, then dissolved with chemical reagents and after passing through maturing and filtering tanks, it goes through a spinning machine, where it is formed into long thin filaments similar to ordinary wool fibre. Its advantage over natural wool is that it does not shrink. Cloth woven from it has been found superior to the wool product from the standpoint of costs and insulation. Hence, clothes made up from artificial wool are warm in winter and cool in summer. Also, the cloth is much finer, hence stockings made from the artificial product feel softer on the legs than those made of natural wool. The new material dyes well and to great extent can be manufactured by machinery now used in the rayon industry. Judging by what happened in that industry, one could predict a brilliant future for the new artificial fibre, born, as stated before, because of necessity.