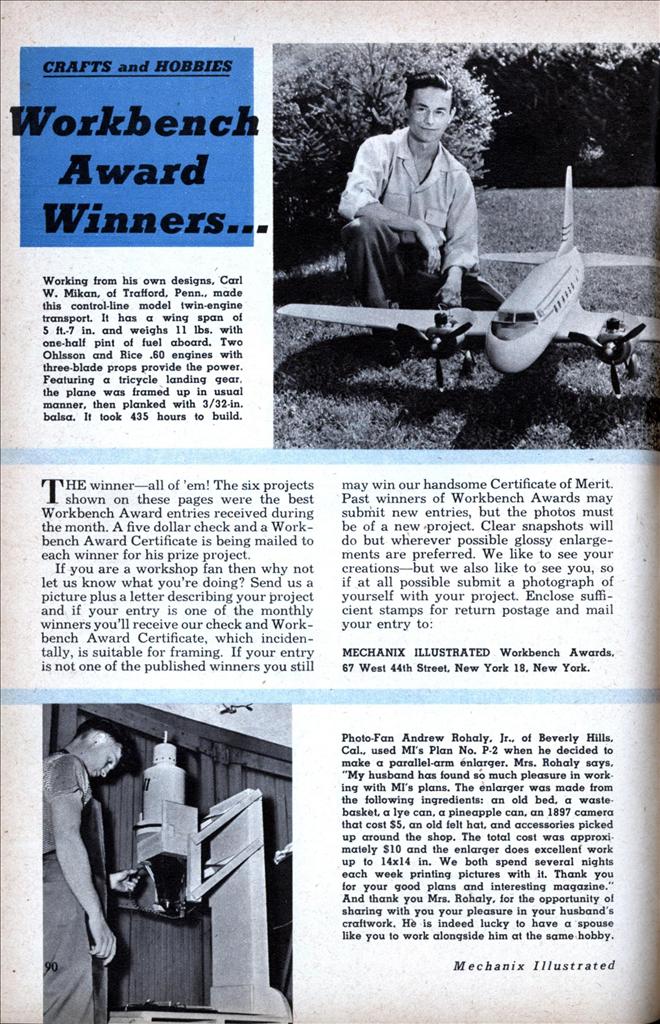 THE winner—all of ’em! The six projects shown on these pages were the best Workbench Award entries received during the month. A five dollar check and a Workbench Award Certificate is being mailed to each winner for his prize project.

If you are a workshop fan then why not let us know what you’re doing? Send us a picture plus a letter describing your project and if your entry is one of the monthly winners you’ll receive our check and Workbench Award Certificate, which incidentally, is suitable for framing. If your entry is not one of the published winners you still may win our handsome Certificate of Merit. Past winners of Workbench Awards may submit new entries, but the photos must be of a new ‘project. Clear snapshots will do but wherever possible glossy enlargements are preferred. We like to see your creations—but we also like to see you, so if at all possible submit a photograph of yourself with your project. Enclose sufficient stamps for return postage and mail your entry to:

Working from his own designs, Carl W. Mikan, of Trafford, Penn., made this control-line model twin-engine transport. It has a wing span of 5 ft.-7 in. and weighs 11 lbs. with one-half pint of fuel aboard. Two Ohlsson and Rice .60 engines with three-blade props provide the power. Featuring a tricycle landing gear, the plane was framed up in usual manner, then planked with 3/32-in. balsa. It took 435 hours to build.

Photo-Fan Andrew Rohaly, Jr., of Beverly Hills, Cal., used Mi’s Plan No. P-2 when he decided to make a parallel-arm enlarger. Mrs. Rohaly says. “My husband has found so much pleasure in work ing with Mi’s plans. The enlarger was made from the following ingredients: an old bed, a waste-basket, a lye can, a pineapple can, an 1897 camera that cost $5, an old felt hat, and accessories picked up around the shop. The total cost was approximately $10 and the enlarger does excellent work up to 14×14 in. We both spend several nights each week printing pictures with it. Thank you for your good plans and interesting magazine.” And thank you Mrs. Rohaly, for the opportunity of sharing with you your pleasure in your husband’s craftwork. He is indeed lucky to have a spouse like you to work alongside him at the same hobby.

Jason Petroelje. of Holland, Mich., is another model-plane builder. He writes, “Enclosed is a picture of my Navion. I made it from Mi’s Plan No. 369. This is the first time I have used one of your plans. I found it very easy to follow. I have just started your Cessna 140 (Plan No. 380). The gal holding the model in the picture is my wife.” You’re another doubly lucky guy, Jason. Congratulations.

Boat fans will recognize the unusual project at the left as being an outboard-powered catamaran. Dick Oldham, of Pittsburgh, and Don Zimmerman, of McKees Rocks, both in Pennsylvania, are the proud builders. They got the idea for the boat from MI. The hulls are belly tanks and are held together with 1-in. pipe welded inside and out. The seats are made of Masonite and wood and supported by angle-iron braces wrapped around the pipe that goes through the tanks. Propulsion is provided by a 6-hp. outboard motor. Ex-GI’s will immediately realize that the model for the unusual paint job was the lowly voracious shark.

Ed Beyer, of Los Angeles, has two sons: eight-year-old Tommy and five-year-old Jackie. He devoted four months of his spare time in making this midget hot rod for them. He tells us. “The boys are wonderful drivers and it’s great fun to watch them whip the little car around. The materials cost a little over $100 and the car weighs 150 lbs. and stands 21 in. high. The engine is a 3/4-hp. Briggs with an automatic mercury clutch. Two V-belts and pulleys give a 16 to 1 gear ratio, allowing a speed of 16 m.p.h. The frame is welded up from 1-in. tubing.”

Frank M. Konrad, Jr., of Bridgeton, Mo., takes pen in hand to write, “Here is a picture of a bobsled I built recently in my spare time. It is 9 ft. long and has knee-action runners. It also has two headlights, a bell, brakes, and it steers perfectly. It has a seating capacity of five people. We had lots of fun last winter, coasting down hills at 30 m.p.h.” And we bet you’re having lots of fun with it this winter, too. MI is picking up the tab for a round of hot coffee (or other liquid) for you and your four passengers—we’re sending you a check for $5 and a Workbench Award Certificate. How’s about an invitation to go bobsledding this winter? Only one thing we’d rather do. and that is go to Florida and bask in the sun (Fla. Chamber of Commerce please note.)