Popular Science
Issue: May, 1959
Posted in: General
Tags: how its made
2 Comments on Workers Wear Space Suits in New Gas-Filled Factory (May, 1959) 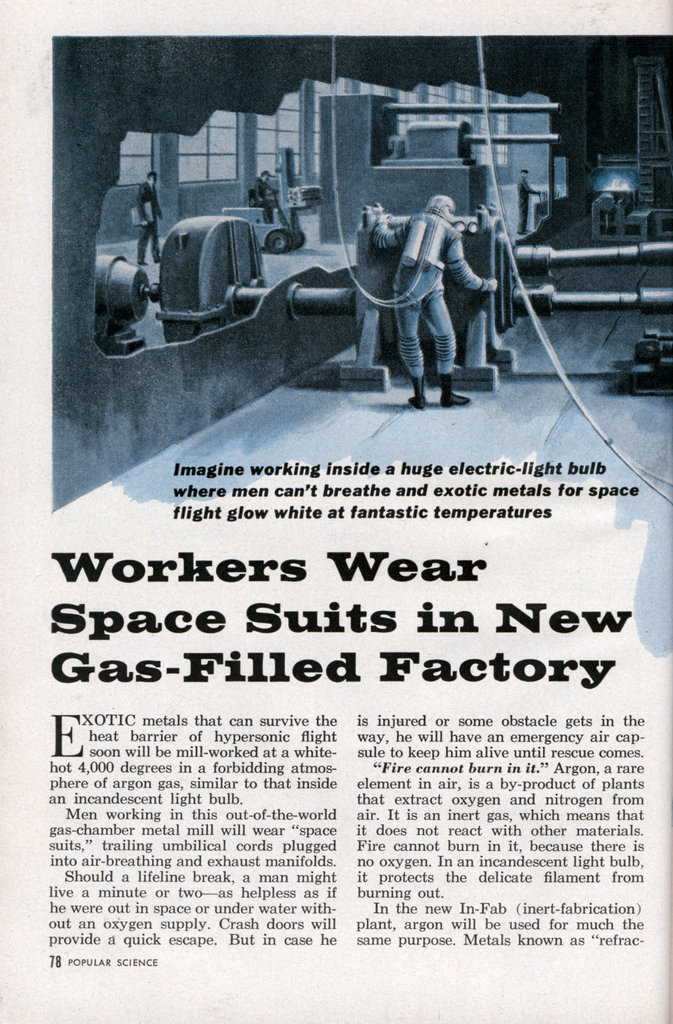 EXOTIC metals that can survive the heat barrier of hypersonic flight soon will be mill-worked at a white-hot 4,000 degrees in a forbidding atmosphere of argon gas, similar to that inside an incandescent light bulb.

Should a lifeline break, a man might live a minute or twoâ€”as helpless as if he were out in space or under water without an oxygen supply. Crash doors will provide a quick escape. But in case he is injured or some obstacle gets in the way, he will have an emergency air capsule to keep him alive until rescue comes.

“Fire cannot burn in it.” Argon, a rare element in air, is a by-product of plants that extract oxygen and nitrogen from air. It is an inert gas, which means that it does not react with other materials. Fire cannot burn in it, because there is no oxygen. In an incandescent light bulb, it protects the delicate filament from burning out.

In the new In-Fab (inert-fabrication) plant, argon will be used for much the same purpose. Metals known as “refractories,” which maintain their strength at extreme temperatures, do not get along with two enemies contained in airâ€”oxygen and nitrogenâ€”when raised to the heat at which they are best worked.

One of the most promising of these refractory metals at present is molybdenum.

To achieve maximum strength it should be fabricated at 80 percent of its 4,752-degree melting point. At that heat, oxygen attacks the metal with a violence that not only causes internal damage, but raises great clouds of obscuring smoke. To prevent this, the argon atmosphere in the $3,000,000 pilot plant will be kept so oxygen-free that if the glass of a light bulb were broken, the filament would continue to glow. To accomplish this, the chamber, 40 feet by 80 feet, and 25 feet high, will be as airtight as welded steel plate can make it.

Leakage is “out.” Also, the argon will be at a slightly higher pressure than the outside air, so that what little leakage there is will be argon out, rather than air in. But despite precautions, there will be some leakage, such as from the suit itself, with an air-breathing man inside.

An argon recirculating and purifying system will take care of that. It will renew the atmosphere every three hours, cleansing the gas, keeping oxygen and nitrogen content down to less than 50 parts in a million.

When the chamber is filled, argon will not be pumped in directly, since it is expensive, and some would be lost in mixing with air. Instead, the recirculating system will be used to force nitrogen in through ceiling diffusers, and withdraw air through floor registers. Then argon will be pumped in, replacing the nitrogen in the same way.

Cooling will be a problem, since glowing metal would soon send temperatures soaring to furnace heat. Even with the argon passing over a cooling unit, it will be hot, as high as 110 degrees. So the space suits will have built-in air conditioning. And they will have insulation to protect men working close to white-hot metal.

The men will be there mostly to observe, and to handle minor chores not suitable to automation. Outside, at “pulpits,” operators using remote controls will work the heavy machines: an impacter that will hammer hot ingots into billets and sheet bar; a rolling mill to convert these into rounds and sheet. Each will have its own electric induction furnace for heating the metals. An open-hearth furnace would be impossible, since argon gas will not support combustion.

Other metals later. The In-Fab plant was designed for molybdenum. It will, however, be adaptable for practical hot-working of other refractory metals, such as tungsten, rhenium, tantalum and columbium, at temperatures that have so far been impossible outside the laboratory and experimental setups.

From these tough metals will come the heat-critical parts for faster jets and hotter rockets, and for the nose cones and leading edges of missiles and space craft that, re-entering the earth’s dense atmosphere, will be subjected to temperatures that would melt or vaporize ordinary metals.â€”Herbert O. Johansen.