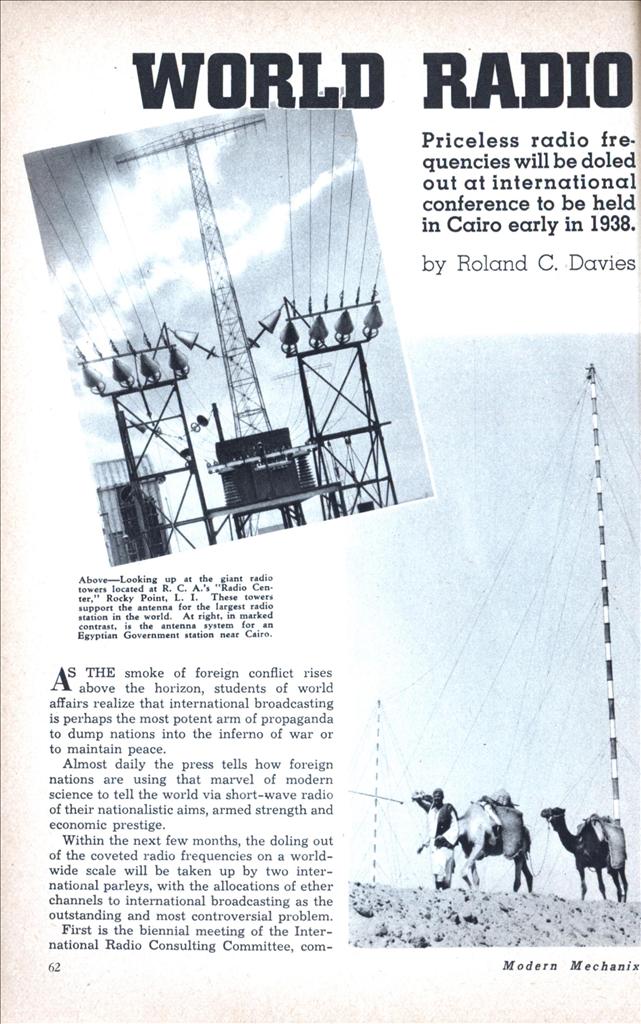 Priceless radio frequencies will be doled out at international conference to be held in Cairo early in 1938.

AS THE smoke of foreign conflict rises above the horizon, students of world affairs realize that international broadcasting is perhaps the most potent arm of propaganda to dump nations into the inferno of war or to maintain peace.

Almost daily the press tells how foreign nations are using that marvel of modern science to tell the world via short-wave radio of their nationalistic aims, armed strength and economic prestige.

Within the next few months, the doling out of the coveted radio frequencies on a worldwide scale will be taken up by two international parleys, with the allocations of ether channels to international broadcasting as the outstanding and most controversial problem.

The Cairo conference will capture the eyes of the entire radio world, because it has treaty-making powers in drawing up the rules that govern frequency allocations, interference and use of radio. The findings of the CCIR at Bucharest, however, are purely advisory and are confined to technical problems. They carry the weight of a world consensus for the guidance of the treaty-making assembly at the Egyptian capital in 1938.

During the last six months a score of American government radio experts, aided by the leading technical brains of the nation’s broadcasting and communications companies, have been busy drafting the United States proposals to be presented at the Cairo conference. The American program is to be forwarded by this coming November to the other nations, which in turn send their proposals to the United States so that all may study in advance the plans that will come before the international conference.

There is a saying in world capitals that the United States has not only never been defeated in a war but also has never lost an international radio conference, although this nation may have been the victim of shrewd diplomats in recent arms and economic parleys. Back in 1927, when the nations first assembled in Washington for a world radio agreement, the United States took the leading role. At that time the use of radio by ships was the principal international problem, with broadcasting limited chiefly to national boundaries. At Madrid in 1932, broadcasting became the critical problem, but the squabbles were confined in a large degree to European nations.

However, the Cairo Radio Conference is expected to become the scene of a bitter fight. The larger European powers—England, France, Germany, Italy and Soviet Russia—together with Japan, are to be pitted against the smaller countries, while the United States will hold the balance of power. The short waves for international broadcasting will be the issue at stake. In the past the larger nations, due to greater technical progress, have grabbed the better allocations for broadcasting and communications, but now the smaller countries have developed their radio facilities and are demanding their place in the sun on the ground that each sovereign entity is entitled to its share of the valuable channels in the ether.