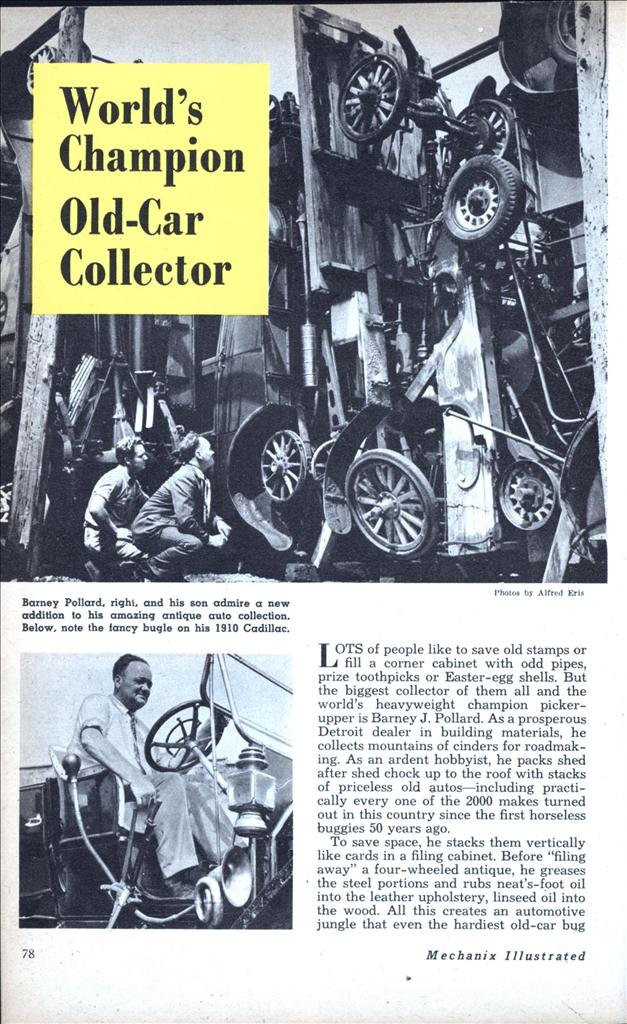 LOTS of people like to save old stamps or I fill a corner cabinet with odd pipes, prize toothpicks or Easter-egg shells. But the biggest collector of them all and the world’s heavyweight champion picker-upper is Barney J. Pollard. As a prosperous Detroit dealer in building materials, he collects mountains of cinders for roadmaking. As an ardent hobbyist, he packs shed after shed chock up to the roof with stacks of priceless old autos-including practically every one of the 2000 makes turned out in this country since the first horseless buggies 50 years ago.

To save space, he stacks them vertically like cards in a filing cabinet. Before “filing away” a four-wheeled antique, he greases the steel portions and rubs neat’s-foot oil into the leather upholstery, linseed oil into the wood. All this creates an automotive jungle that even the hardiest old-car bug hesitates to explore. Usually he keeps a dozen of his prize finds in top running order in his big garage. His favorite for driving about town is an $11,000 Locomobile of 1922 vintage-one of the first de luxe sports cars. When he’s in a hurry, though, he has to use his new Cadillac -too -many curious car fans corner him whenever he stops for a traffic light.

Pollard first began picking up cars in 1939 when he took an old Cadillac as final payment on an overdue debt. Today he scours the countryside on 400-mile-a-day “hunts” and snoops everywhere-into barns, backyards, junk heaps. “Poorest place to find an old car,” he declares, “is Detroit-the auto capital of the world.” The automobile is as much a symbol of America as the eagle, he feels. Some day before long he hopes he can unstack his best oldtimers and park them permanently in a real national automotive museum.