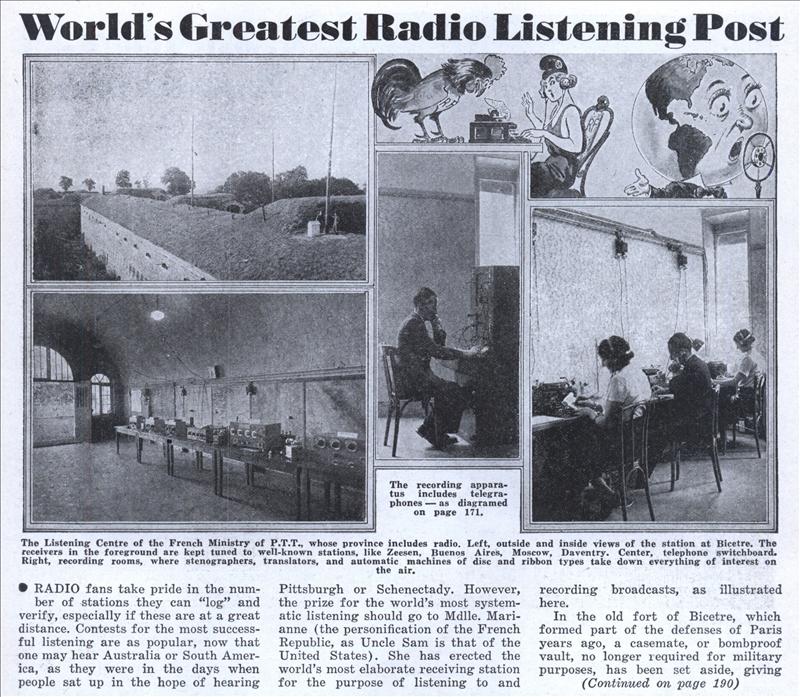 RADIO fans take pride in the number of stations they can “log” and verify, especially if these are at a great distance. Contests for the most successful listening are as popular, now that one may hear Australia or South America, as they were in the days when people sat up in the hope of hearing Pittsburgh or Schenectady. However, the prize for the world’s most systematic listening should go to Mdlle. Marianne (the personification of the French Republic, as Uncle Sam is that of the United States). She has erected the world’s most elaborate receiving station for the purpose of listening to and recording broadcasts, as illustrated here.

In the old fort of Bicetre, which formed part of the defenses of Paris years ago, a casemate, or bombproof vault, no longer required for military purposes, has been set aside, giving about 1500 square feet of floor space for the installation of radio receiving apparatus; while a series of antenna masts was mounted above. Here reception* was found naturally good, while the fort is sufficiently far from the city to minimize man-made static. Twenty long- and short-wave receivers are installed here, and kept in use for the continual reception of programs, French as well as foreign. This station is connected by 28 direct wire lines to a “radio central,” where the listeners—who are distinct from the engineers who do the tuning in—note down anything of importance in news or announcements. If in a foreign language, it is promptly translated into French, and delivered to M. Mandel, the Minister of P. T. T. (telephone and telegraph posts) who has official supervision of radio. Other features include the study of the technical features of broadcasting; such as constancy of transmitting frequency, arrangement and quality of musical programs. In addition to the stenographic staff, there are six sound-recording devices —four phonographs with very thin aluminum discs, and two steel-tape machines, which record magnetically, on the telegraphone principle; so that a permanent record can be made for reproduction whenever it is desired. There is a full force on duty, 24 hours of the day; for international transmissions, round the world, are continuous.

We are sorry for taking the joy out of the lives of so many radio fans, who have fondly imagined that they themselves had the world’s best listening equipment—but there it is.