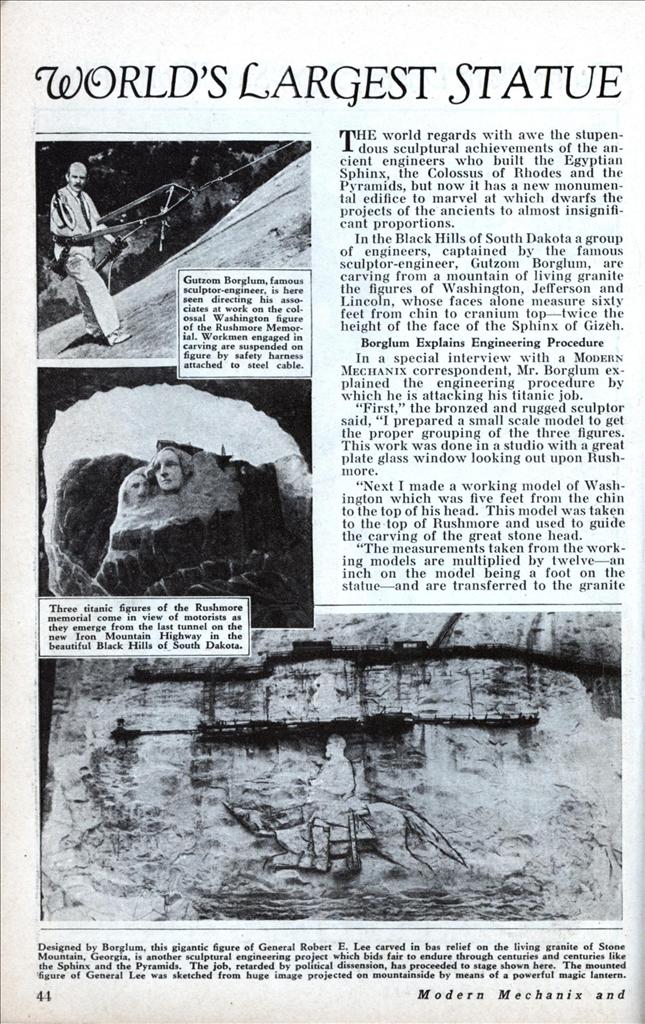 THE world regards with awe the stupendous sculptural achievements of the ancient engineers who built the Egyptian Sphinx, the Colossus of Rhodes and the Pyramids, but now it has a new monumental edifice to marvel at which dwarfs the projects of the ancients to almost insignificant proportions.

In the Black Hills of South Dakota a group of engineers, captained by the famous sculptor-engineer, Gutzom Borglum, are carving from a mountain of living granite the figures of Washington, Jefferson and Lincoln, whose faces alone measure sixty feet from chin to cranium top—twice the height of the face of the Sphinx of Gizeh. Borglum Explains Engineering Procedure In a special interview with a MODERN Mechanix correspondent, Mr. Borglum explained the engineering procedure by which he is attacking his titanic job.

“First,” the bronzed and rugged sculptor said, “I prepared a small scale model to get the proper grouping of the three figures. This work was done in a studio with a great plate glass window looking out upon Bush-more.

“Next I made a working model of Washington which was five feet from the chin to the top of his head. This model was taken to the top of Rushmore and used to guide the carving of the great stone head.

“The measurements taken from the working models are multiplied by twelve—an inch on the model being a foot on the statue—and are transferred to the granite of Mount Rushmore with the aid of a 30 ft. swinging boom and plumb bob.

“This boom swings horizontally through a graduated arc of 180 degrees. The plumb bob may be suspended from any point upon it. After setting the angle, the distances horizontally outward and vertically downward to the rock are measured by tape. Skillful engineering here is as important to the work as artistic modeling.

“When the work was first begun, I picked the largest sound piece of granite for the figure of Washington,” Mr. Borglum continued. “The carving of the rock monument consisted in excavating the excess granite by a process of drilling and blasting which removes successive thin layers without injuring the mountain itself. As little as ten inches of granite can be moved at one time. Engineers Work in Safety Harness “This process proceeds to within a few inches of the final surface, and then the finishing is done by a ‘broaching’ process.

“There are no reserved seats at Rush-more. Workmen when engaged in actual carving are suspended over the edge of the cliff in steel and leather harnesses attached to a % inch steel cable. These cables are ‘paid out’ or reeled in by hand winches.

“Usually ten Ingersoll-Rand ‘R12 Jack-hammer’ drills are on the job for the rougher work. When in use these, too, are attached to cables. The drills are % inch steel finished with cross bits.

“All drilling is dry. On the head of the three figures, now roughly completed, the drill holes were from 10 to 12 inches deep, about three inches apart and set about six inches from the face.

“About a 40 per cent special gelatin dynamite is used in each hole. The cap wires of a row of holes, usually from 60 to 75, are connected and the charges in the row of holes are fired simultaneously by means of a 110-volt power circuit. The dynamite does its work rapidly and smoothly.

“When blasting has brought the work to within three or four inches of the finished surface, another procedure is employed for the final “sculpturing.” Holes three or four inches in depth are drilled vertically into the face at intervals of about three inches over the entire surface.

“Chisel bits are used in this step, as they do faster work. Once all the holes have been drilled, the rock between is ‘broached’ out with the aid of short pointed steel gads driven by plugger drills. Broaching produces the finer finished surface.”