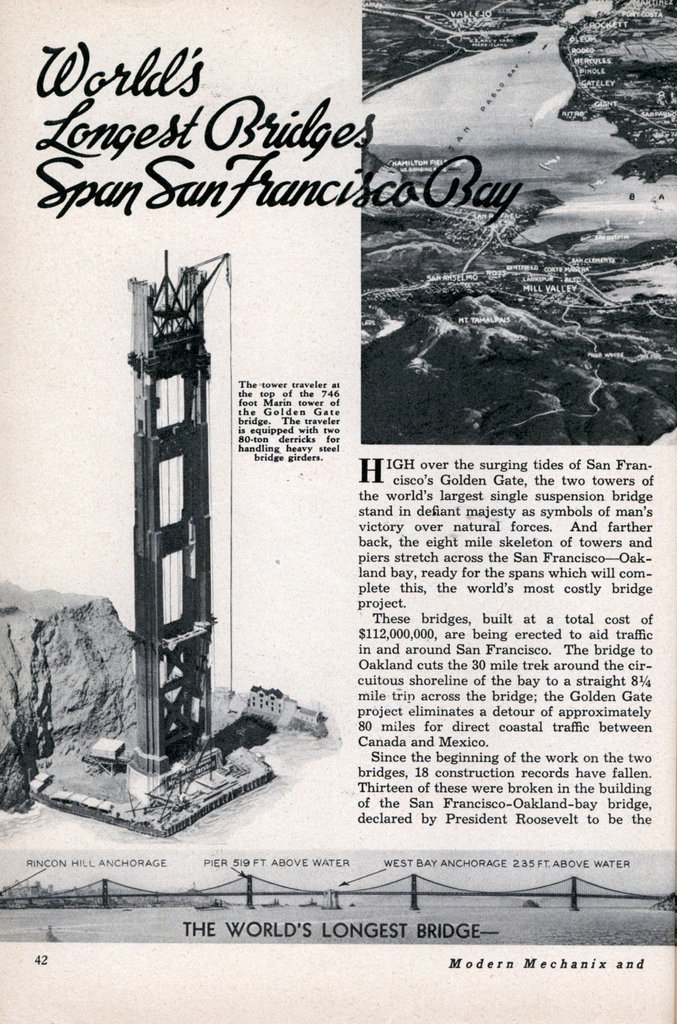 A comprehensive article on the Golden Gate and San Francisco Oakland Bay bridges, telling of man’s struggle with nature to complete, at a tremendous cost, two of the most daring construction feats ever undertaken by American engineers.

HIGH over the surging tides of San Francisco’s Golden Gate, the two towers of the world’s largest single suspension bridge stand in defiant majesty as symbols of man’s victory over natural forces. And farther back, the eight mile skeleton of towers and piers stretch across the San Franciscoâ€”-Oakland bay, ready for the spans which will complete this, the world’s most costly bridge project.

These bridges, built at a total cost of $112,000,000, are being erected to aid traffic in and around San Francisco. The bridge to Oakland cuts the 30 mile trek around the circuitous shoreline of the bay to a straight 8-1/4 mile trip across the bridge; the Golden Gate project eliminates a detour of approximately 80 miles for direct coastal traffic between Canada and Mexico.

Since the beginning of the work on the two bridges, 18 construction records have fallen. Thirteen of these were broken in the building of the San Francisco-Oakland-bay bridge, declared by President Roosevelt to be the largest construction project started in the United States in 1933, and rated by engineers as tenth among the structural wonders of the world.

Built at a cost of $77,000,000, 6.7 per cent of the total steel produced in the United States in 1933 went into the construction of this gigantic project. It will support a double highway 235 feet over the bay 8-1/4 miles, from San Francisco to Yerba Buena Island and from Yerba Buena to the city of Oakland.

Fifty-one piers and three cable anchorages were required to make the crossing. Especially unique is the center anchorage in the middle of the West Bay which is designed to take strain from both sides as the common anchorage of two suspension spans. To resist this terrific pull, it is sunk 220 feet into the bed-rock and towers 235 feet above low water level. The anchorage is 197 feet long, 92 feet wide, and has an overall height of more than 500 feet.

The San Francisco anchorage on Rincon Hill is a gravity type cement cube, a huge mass of masonry sunk deep into the earth; supported by its own weight, and rising 200 feet to the level of the bridge. The Yerba Buena anchorage will be accomplished by gouging two cable tunnels 160 feet into solid rock.

Four concrete and steel piers, rising from 474 to 519 feet above the water will support the cables from which the spans of the two-mile double bridge will be suspended.

The use of Yerba Buena Island as a mid-anchorage necessitated the cutting of a 540 foot vehicular tunnel to connect the two sections of the bridge. Seventy-eight feet high and 67 feet wide, double decked and steel-lined, it is the longest tunnel of its kind in the world.

The bridge structure, at its easterly end, terminates two miles from shore in the shallow water and tide flats of the East Bay. Here it is joined by a four-mile fill highway extending to shore at Oakland and then swinging north over the tide flats to Berkeley. The construction of this highway requires one-half million cubic feet of sand fill and 348,000 tons of protecting rocks.

The bridge comes into San Francisco 175 feet over the harbor, so high above sea level that the Palace Hotel of San Francisco could easily be slipped underneath. The lower deck Â» of the bridge, used for heavy trucks and interurban cars, first touches ground on precipitous Rincon Hill; the top deck reaches ground 4,200 feet to the westward. Curved ramps swing from the top deck at Rincon Hill for motorists bound in diverse directions.

The construction of pier E3, adjacent to Yerba Buena Island is a feat that will go down in the annals of engineering history.

Here it was necessary to carry on underwater excavation to a depth of 242 feet below the water in order to obtain suitable foundation in the bed of clay.

A compressed-air-flotation caisson enabled the bridge builders for the first time to construct the pier from the surface of the water down.

With the completion of all underwater and structural work, the bridge is rapidly entering the aerial stages.

At the present rate, it is expected that the work will be completed in August, 1936, six months ahead of the contracted time.

The Golden Gate bridge, costing $35,000,000, has not only the longest suspension span, 4,200 feet, but it is the only bridge in the world authorized to be built across the outer mouth of a major ocean harbor.

Gracefully swinging in an inverted arc 220 feet over the harbor, this bridge has a highway with a daily capacity sufficient to handle a string of automobiles reaching from the Oregon Line to the Mexican border, moving at a speed of 22 miles per hour. The roadway to the bridge is graded up in easy, sweeping curves, narrowing to a 60 foot, six-lane highway over the bridge proper. Two 10-1/2 foot sidewalks occupy the remaining space.

The toll terminal has 16 gateways and 12 toll booths to facilitate quick handling of fast moving traffic.

The two towers, one at San Francisco and one at Marin, are identical, each 121 feet wide at the bottom, 846 feet high, and 746 feet above the mean high water level. They are the highest bridge towers in the worldâ€”150 feet higher than those on the George Washington bridge in New York City.

Engineers throughout the world have been watching the construction of the pier and fender off the Fort Point shore in 100 feet of water which is pronounced the most difficult piece of underwater work ever undertaken by man. To complete this task, a steel fender, 750 feet in circumference was set into the seaâ€”a fender as large as the University of California stadium. Such fenders not only make it possible to pour the piers, but they also provide permanent protection after the bridge is finished.

The concrete work on the piers and the two giant 64,000 ton anchorages required 254,700 cubic yards of cement. The greatest barge fleet ever assembled on San Francisco Bay for a single job was paid $1,300,000 for conveying the concrete to the bridge. They carried enough of the mixture to build a sidewalk five-feet wide from San Francisco to New York.