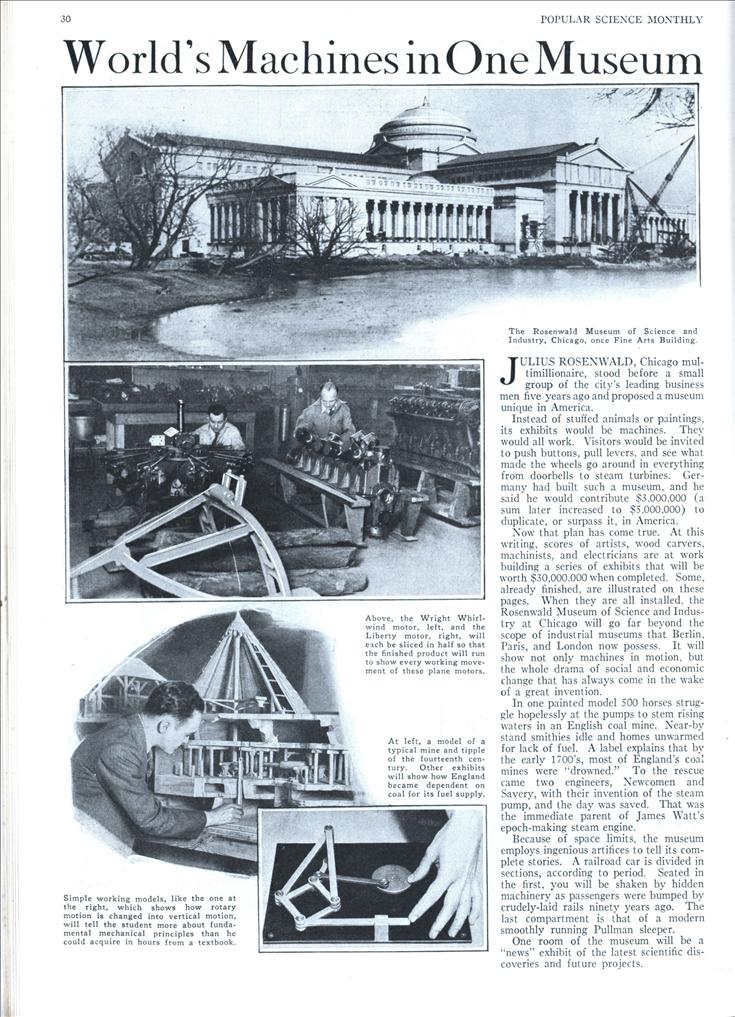 World’s Machines in One Museum

JULIUS ROSEN WALD, Chicago multimillionaire, stood before a small group of the city’s leading business men five years ago and proposed a museum unique in America.

Instead of stuffed animals or paintings, its exhibits would be machines. They would all work. Visitors would be invited to push buttons, pull levers, and see what made the wheels go around in everything from doorbells to steam turbines. Germany had built such a museum, and he said he would contribute $3,000,000 (a sum later increased to $5,000,000) to duplicate, or surpass it, in America.

Now that plan has come true. At this writing, scores of artists, wood carvers, machinists, and electricians are at work building a series of exhibits that will be worth $30,000,000 when completed. Some, already finished, are illustrated on these pages. When they are all installed, the Rosenwald Museum of Science and Industry at Chicago will go far beyond the scope of industrial museums that Berlin. Paris, and London now possess. It will show not only machines in motion, but the whole drama of social and economic change that has always come in the wake of a great invention.

In one painted model 500 horses struggle hopelessly at the pumps to stem rising waters in an English coal mine. Near-by stand smithies idle and homes unwarmed for lack of fuel. A label explains that by the early 1700’s, most of England’s coal mines were “drowned.” To the rescue came two engineers, Newcomen and Savery, with their invention of the steam pump, and the day was saved. That was the immediate parent of James Watt’s epoch-making steam engine.

Because of space limits, the museum employs ingenious artifices to tell its complete stories. A railroad car is divided in sections, according to period. Seated in the first, you will be shaken by hidden machinery as passengers were bumped by crudely-laid rails ninety years ago. The last compartment is that of a modern smoothly running Pullman sleeper.

One room of the museum will be a “news” exhibit of the latest scientific discoveries and future projects.