In 1982 (two years after this article was published) the Cray-XMP was one of, if not the, most powerful computers in the world. It had 16 MB of ram and in a dual processor configuration could hit 400 MFLOPS. It also occupied something like 50 square feet, used an ungodly amount of power and cost around $32,000,000 in today’s dollars.

By comparison, the Apple A6 processor used in the iPhone 5 is built using a 32nm process, so smaller than the lines in that picture. It has 1GB, or 64 times as much memory and the setting aside the dual core CPUs, the graphics cores alone hit about 25 GFLOPS or about 60 times the performance of the Cray. The A6 is about 97 square millimeters in area and costs around $17.50. And of course, it does this all with out Josephson Junctions or a cryostat.

If you want to see what a modern supercomputer looks like, check out the Cray Titan. 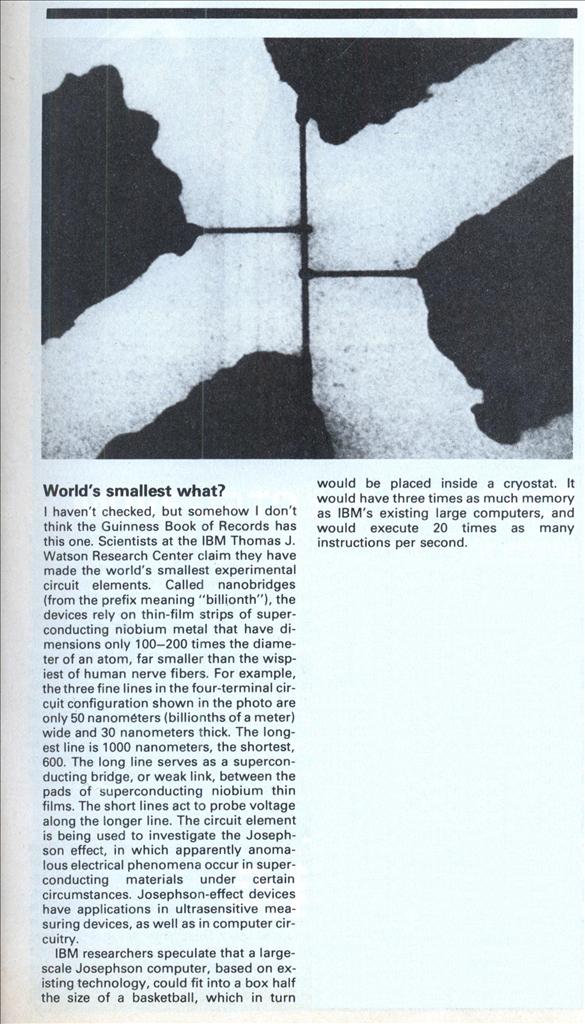 I haven’t checked, but somehow I don’t think the Guinness Book of Records has this one. Scientists at the IBM Thomas J. Watson Research Center claim they have made the world’s smallest experimental circuit elements. Called nanobridges (from the prefix meaning “billionth”), the devices rely on thin-film strips of superconducting niobium metal that have dimensions only 100-200 times the diameter of an atom, far smaller than the wispiest of human nerve fibers. For example, the three fine lines in the four-terminal circuit configuration shown in the photo are only 50 nanometers (billionths of a meter) wide and 30 nanometers thick. The longest line is 1000 nanometers, the shortest, 600. The long line serves as a superconducting bridge, or weak link, between the pads of superconducting niobium thin films. The short lines act to probe voltage along the longer line. The circuit element is being used to investigate the Joseph-son effect, in which apparently anomalous electrical phenomena occur in superconducting materials under certain circumstances. Josephson-effect devices have applications in ultrasensitive measuring devices, as well as in computer circuitry.

IBM researchers speculate that a large-scale Josephson computer, based on existing technology, could fit into a box half the size of a basketball, which in turn would be placed inside a cryostat. It would have three times as much memory as IBM’s existing large computers, and would execute 20 times as many instructions per second.