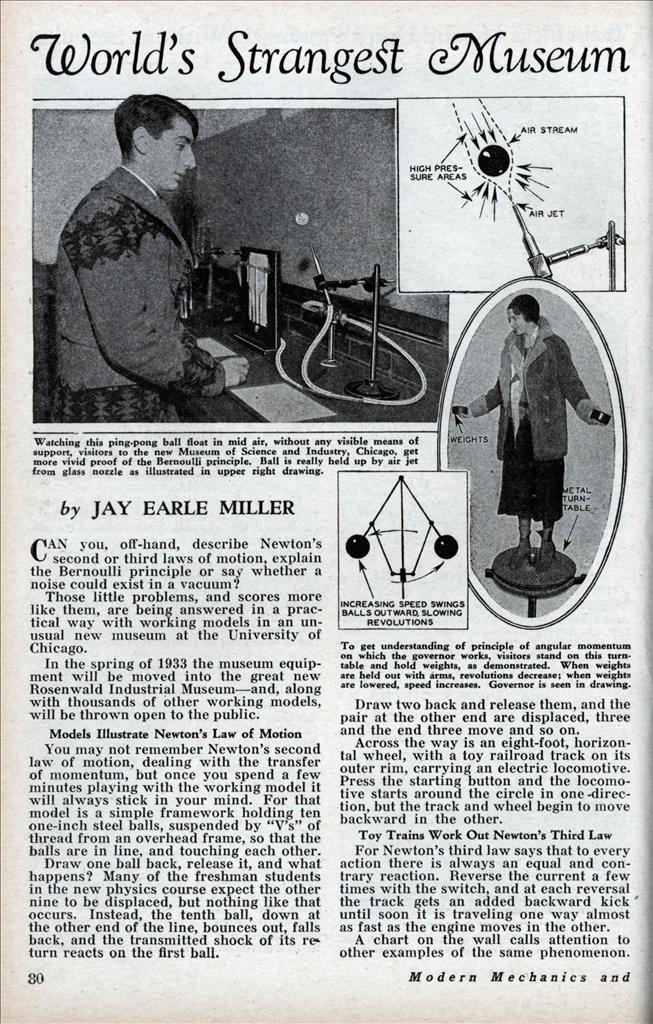 CAN you, off-hand, describe Newton’s second or third laws of motion, explain the Bernoulli principle or say whether a noise could exist in a vacuum?

Those little problems, and scores more like them, are being answered in a practical way with working models in an unusual new museum at the University of Chicago.

In the spring of 1933 the museum equipment will be moved into the great new Rosenwald Industrial Museum—and, along with thousands of other working models, will be thrown open to the public.

Models Illustrate Newton’s Law of Motion You may not remember Newton’s second law of motion, dealing with the transfer of momentum, but once you spend a few minutes playing with the working model it will always stick in your mind. For that model is a simple framework holding ten one-inch steel balls, suspended by “V’s” of thread from an overhead frame, so that the balls are in line, and touching each other. Draw one ball back, release it, and what happens? Many of the freshman students in the new physics course expect the other nine to be displaced, but nothing like that occurs. Instead, the tenth ball, down at the other end of the line, bounces out, falls back, and the transmitted shock of its re* turn reacts on the first ball.

Draw two back and release them, and the pair at the other end are displaced, three and the end three move and so on.

Across the way is an eight-foot, horizontal wheel, with a toy railroad track on its outer rim, carrying an electric locomotive. Press the starting button and the locomotive starts around the circle in one -direction, but the track and wheel begin to move backward in the other.

Toy Trains Work Out Newton’s Third Law For Newton’s third law says that to every action there is always an equal and contrary reaction. Reverse the current a few times with the switch, and at each reversal the track gets an added backward kick ‘ until soon it is traveling one way almost as fast as the engine moves in the other.

A chart on the wall calls attention to other examples of the same phenomenon.

One is the tug of war, in which action and reaction are equal so long as the two teams remain stationary.

Another is a big railroad gun. Because of its small mass and inertia the shell leaves at high speed, while the great mass of the gun absorbs the reaction with comparatively small hydraulic shock absorbers.

A third is a fisherman stepping out of his boat. As he puts one foot on the pier and lifts the other he gives the boat a backward push—a scientific fact that has spilled many an inexperienced boatman. All of these examples are covered by the dry and dusty statement formulated by Newton long ago, but in the new museum they actually live and mean something.

Student Becomes Human Governor A student steps on a small metal turntable and picks up a pair of three kilogram scale weights. The attendant gives a slight push and the student starts to revolve. Then she extends her arms, with the weights, at full length, and immediately slows down, She drops her arms, and speeds up. Just a human governor, the prototype of ine ball governor used on engines for gen- erations. But after that museum experience there can never be any question in her mind why the principle of angular momentum works.

A crowd of boys flocks around the brake test machine. There’s a heavy flywheel with a brake band attached to recording scales, a crank to turn it, an electric clock with large second hand to count off the minute, and a chart showing the number of revolutions and scale reading for an average man, a strong man and one horsepower.

A complicated arrangement of glass tubes and liquids illustrates Bernoulli’s principle, that, in a moving liquid pressure corresponds to energy and velocity to kinetic energy. Since the total energy, potential plus kinetic, is constant, the velocity is greatest when the pressure is smallest.

Can you remember that? But when you step to the next exhibit and see a small ping pong ball floating in the air on an air stream projected from a glass nozzle at an angle of 45 degrees it all becomes clear, and unforgetable.

Cut-away Engine Shows Working Parts A Corliss engine, a steam turbine with herringbone reduction gearing, and a Liberty aircraft engine, all cut away to show the working parts, the turbine driven by compressed air and the other two by elec- trie motors, form a working exhibit of power generation.

In one of the rooms a small model of Old Faithful and the other Yellowstone park geysers erupts every six minutes. It is made of galvanized iron, a tall, slim cone, well insulated, sitting on a tiny electric stove, with a broad, flat pan at the top to catch the falling water.

Model Shows Why Old Faithful Spouts Because of the comparatively great depth of the water it becomes super-heated at the bottom, and then, when the top layers begin to steam and bubble up, the rapidly expanding steam from the over-heated bottom portion ejects the geyser.

A small brass weight and a large hollow brass ball, both weighing the same, and suspended from the ends of a scale beam under a bell jar from which the air can be exhausted at the turn of a valve, stumps many students.

When the air is pumped out the ball end of the scale arm sinks, despite the fact that both ball and weight weigh the same. The answer is closely associated with the problems of ballooning and lighter-than-air craft, for while the ball and weight appear to weigh the same, in air, that is not actually true, and the apparent weight of the ball is its true weight, less the support given by the air to its larger surface. When that support is removed in a partial vacuum the ball proves to be the heavier.

Vacuum phenomena are a continual surprise to the students. They see readily why a toy balloon under a bell jar grows larger when they open the valve and let the pump exhaust the air around it, but the electric bell in a jar is a continual source of amazement.

You Can’t Hear Through a Vacuum This bell can be started ringing, and then, as the air around it grows less and less the sound gradually fades, and finally ceases altogether, when there is no longer sufficient air in which to set up sound waves.

Complicated experiments of the late Dr. Michelson in the measurement of the velocity of light, X-ray apparatus, crystal structures, and a host of other scientific phe- nomena are demonstrated by simple working apparatus.

Attendants are available to answer questions, but, under the new system whereby every student, regardless of plans for the future, is required to take groundwork courses in four sciences, no information is volunteered.

Museum Occupies 5 V2 Acres of Space When the new Rosenwald museum opens in the spring of 1933 its 580,000 square feet of a floor space in a great five and a half acre building—often described as the most beautiful structure in America—will become the laboratory for the university students, as well as a museum for the public.

The rebuilding in enduring stone of the old Fine Art Palace of the world’s fair of i933 has been completed, and contracts have been let for the interior. When the doors are opened to the public the reconstruction will represent an investment of $6,000,000 and there will be $3,000,000 worth of working models on hand.

Models Work of Large Crew of Experts A large crew of model experts has been at work for three years in the model shops of the museum building the equipment, and already several storage houses have been tilled with completed models.

So far as humanly possible every model Will do something. Huge ship models, perfect in every detail, will not be just housed in glass cases, but will be mounted in dry docks, which can be operated by visitors through a system of switches, or on marine railways.

Rooms and sections will trace the development of each field of science and mechanics from the dawn of history down to the present. In one alcove, for example, a reproduction of an alchemist’s laboratory of the middle ages will face a modern chemical laboratory.

A section on bridge building will open with the earliest types of wooden, stone and bamboo bridges (the latter scale models of famous Japanese types) and close with the latest thing in suspension and bascule bridges, and the bascule models will be electrically operated.

Panama Canal Model to be Shown Alongside a working model of the Panama canal will be an actual section of the old Las Cruces trail, the cobble stone high- way built across the Isthmus by the Spaniards.

Because heat, as the basis of all power, plays such an important part in industry, the museum’s boilers and power plant will be one of the working models. The floor will be cut away in the huge rotunda under the central dome to expose four boilers and the power plant, all spic and span, with stairways so that visitors can inspect their workings.

A complete section of a full size coal mine is being built in the basement, so that visitors can wander through the galleries and see mining machinery in its native habitat. The tall steel shaft of a coal tipple rises in one of the main wings, and visitors to the mine will descend to the workings in a real coal mine hoist.

Every type of vehicle from the earliest invention of the wheel down to the present is to be shown. An old Concord stage coach, an early Orient motor buckboard, a Gardiner-Serpollet steam automobile from Germany, and an ancient cable car are just some of the many full sized exhibits already stored in the warehouses.

Models Actual Copies of Originals The models for the museum are not just reproductions, but actual copies in the materials and using the construction methods of the original, so far as possible. A six-foot model of the four-masted bark “Pamir” recently completed used thousands of tiny rivets in the steel hull and more than 2,000 tiny blocks in the rigging.

An exception to the rule of using original materials is a model of an ancient Japanese bamboo bridge. It was possible to get small bamboo of the proper diameter, but the rings in small bamboo are just M tar apart as in large, so the model would not nave been correct. The difficulty was solved by turning dowel rods down and leaving rings spaced at the proper distance for the scale of the model. With the opening of the museum, just a month before the coming Chicago world’s fair, the city on Lake Michigan will have four of the greatest public attractions in the country—the Field Museum, with its $50,-000,000 display in natural history, the new Shedd Aquarium, recently described in Modern Mechanics and Inventions, and the Adler Planetarium, only one of its kind outside of Europe, being the other three. Models Give Students Enthusiasm for Science High school students will find their classroom studies far more interesting when they have gone through this remarkable museum. With the various models demonstrating the scientific principles in a graphic and unforgettable manner, physics and chemistry will take on a new life, so that students will bring new enthusiasm to the classroom.

The history of mechanical inventions also takes on an added interest when models of devices are seen in operation.