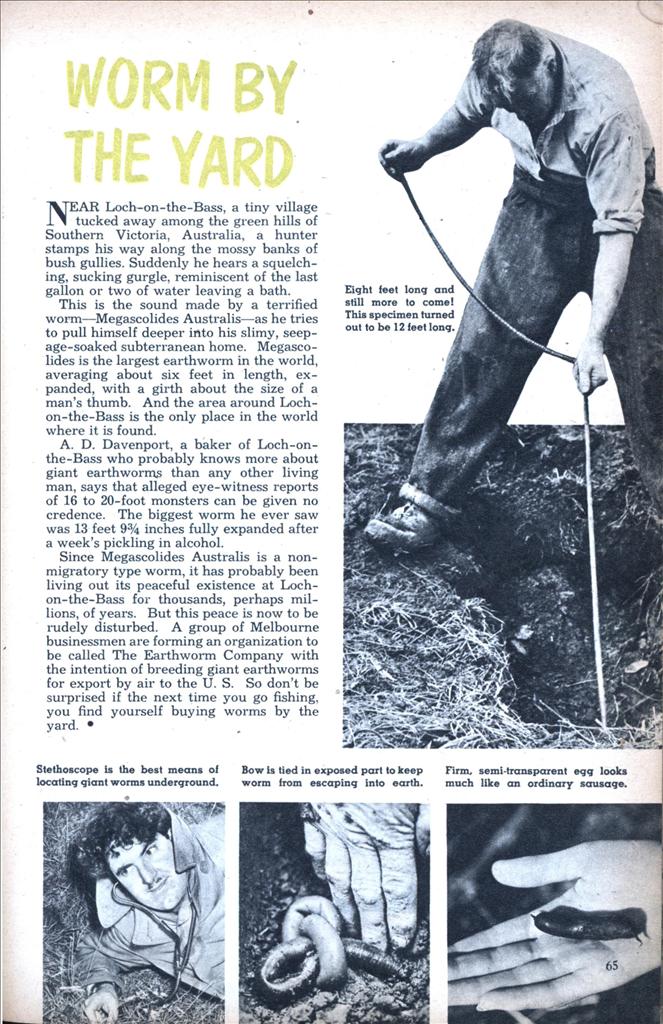 Worm by the Yard

NEAR Loch-on-the-Bass, a tiny village tucked away among the green hills of Southern Victoria, Australia, a hunter stamps his way along the mossy banks of bush gullies. Suddenly he hears a squelching, sucking gurgle, reminiscent of the last gallon or two of water leaving a bath.

This is the sound made by a terrified worm—Megascolides Australis—as he tries to pull himself deeper into his slimy, seepage-soaked subterranean home. Megascolides is the largest earthworm in the world, averaging about six feet in length, expanded, with a girth about the size of a man’s thumb. And the area around Loch-on-the-Bass is the only place in the world where it is found.

A. D. Davenport, a baker of Loch-on-the-Bass who probably knows more about giant earthworms than any other living man, says that alleged eye-witness reports of 16 to 20-foot monsters can be given no credence. The biggest worm he ever saw was 13 feet 9-3/4 inches fully expanded after a week’s pickling in alcohol.

Since Megascolides Australis is a non-migratory type worm, it has probably been living out its peaceful existence at Loch-on-the-Bass for thousands, perhaps millions, of years. But this peace is now to be rudely disturbed. A group of Melbourne businessmen are forming an organization to be called The Earthworm Company with the intention of breeding giant earthworms for export by air to the U.S. So don’t be surprised if the next time you go fishing, you find yourself buying worms by the yard.