Mechanics And Handicraft
Issue: May, 1938
Posted in: Just Weird
1 Comment on Would You Believe It? Oddities from Many Lands (May, 1938)

Would You Believe It? Oddities from Many Lands (May, 1938) 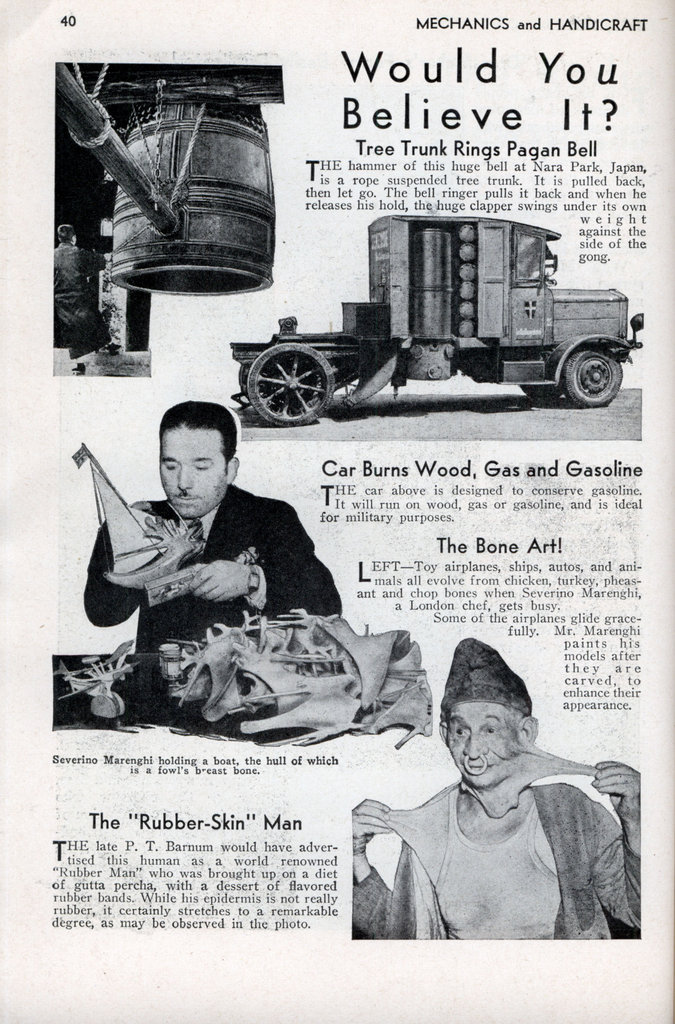 Tree Trunk Rings Pagan Bell
THE hammer of this huge bell at Nara Park, Japan, is a rope suspended tree trunk. It is pulled back, then let go. The bell ringer pulls it back and when he releases his hold, the huge clapper swings under its own weight against the side of the gong.

Car Burns Wood, Gas and Gasoline
THE car above is designed to conserve gasoline. It will run on wood, gas or gasoline, and is ideal for military purposes.

The Bone Art!
LEFTâ€”Toy airplanes, ships, autos, and animals all evolve from chicken, turkey, pheasant and chop bones when Severino Marenghi, a London chef, gets busy. Some of the airplanes glide gracefully. Mr. Marenghi paints his models after they are carved, to enhance their appearance.

The “Rubber-Skin” Man
THE late P. T. Barnum would have adver-tised this human as a world renowned “Rubber Man” who was brought up on a diet of gutta percha, with a dessert of flavored rubber bands. While his epidermis is not really rubber, it certainly stretches to a remarkable degree, as may be observed in the photo.

Natural Rock Formation Is Memorial
A 25-foot rock in skull formation near Skagway, Alaska, is the commemoration to “Soapy Smith,” their first and only gang leader. His real name was Jefferson Randolph Smith, who made a fortune by trickery; he was killed by one of the townsmen, who determined to rid their city of his presence.

China’s Traveling Dentists
A DENTIST’S “office” in China often is an outdoor sort of place, unhampered by leases, landlords, and asepsis. Nevertheless, the work goes on while boys and girls are “helped” through the ordeal by friends and relatives witnessing the event.

Elongated Worms?
NO, this photo does not depict a new variety of mile-long worm. Instead, it shows to just what length a potato will send its rootsâ€”9 to 10 feet.

Lily Pad Boat
THIS youthful angler is at ease in his lily-pad boat; this tropical lily, Victoria regia, was grown in Miami, Florida.

Statue Is Bee Hive
AMONG a number of carved wooden statues in Hofel, Silesia, stands this one, converted by the industrious bee into a hive. The time-worn holes (it is over 300 years old) serve admirably as entrances.

Train Crash
THIS train smash up happened in Lilliputia. The miniature community described in our February, 1938, issue, incorporates this railroad system, and had this “wreck.”

A Rare Fish
WEIGHING 1800 lbs. and 25 feet long, this rare fish (Des Dama) was taken at Havana recently. About one of these fish is landed each year.

A Hermit Sculptor’s Work
IN a stone cavern near Rathen-euf, France, is an amazing sculptured gallery, the work of a recluse who lacked the ordinary mediums of a creative artist, but who utilized the natural contours of the rocky hilltop to bring his figures to life.

Wildcat “Pet”
IN the lower left photo is Negrita, a pet wildcat (Felis cacomitl) owned by Harlan Major of Amityville, L. I. It is exceedingly hard to tame. The photo shows how high it can leap for food, held in the outstretched hand.

Dog Carrier
DESIGNED specifically for the dog’s comfort is this English wind-protected front seat built on the bicycle.