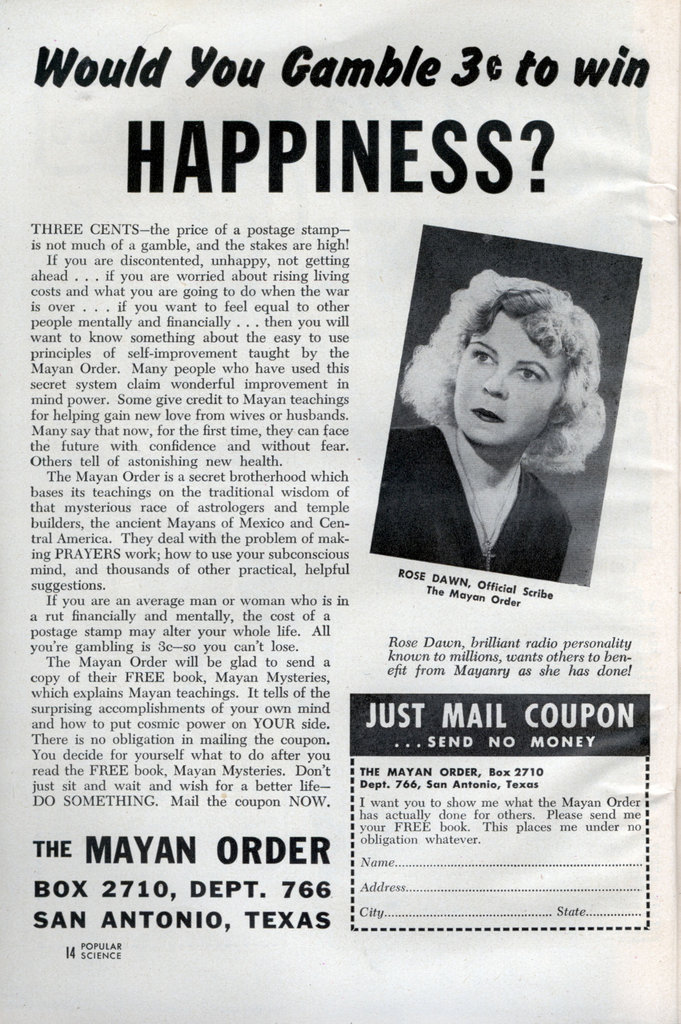 Would you Gamble 3 cents to win HAPPINESS?

THREE CENTSâ€”the price of a postage stamp-is not much of a gamble, and the stakes are high! If you are discontented, unhappy, not getting ahead … if you are worried about rising living costs and what you are going to do when the war is over … if you want to feel equal to other people mentally and financially . . . then you will want to know something about the easy to use principles of self-improvement taught by the Mayan Order. Many people who have used this secret system claim wonderful improvement in mind power. Some give credit to Mayan teachings for helping gain new love from wives or husbands. Many say that now, for the first time, they can face the future with confidence and without fear. Others tell of astonishing new health.

The Mayan Order is a secret brotherhood which bases its teachings on the traditional wisdom of that mysterious race of astrologers and temple builders, the ancient Mayans of Mexico and Central America. They deal with the problem of making PRAYERS work; how to use your subconscious mind, and thousands of other practical, helpful suggestions.

If you are an average man or woman who is in a rut financially and mentally, the cost of a postage stamp may alter your whole life. All you’re gambling is 3câ€”so you can’t lose.

The Mayan Order will be glad to send a copy of their FREE book, Mayan Mysteries, which explains Mayan teachings. It tells of the surprising accomplishments of your own mind and how to put cosmic power on YOUR side. There is no obligation in mailing the coupon. You decide for yourself what to do after you read the FREE book, Mayan Mysteries. Don’t just sit and wait and wish for a better lifeâ€” DO SOMETHING. Mail the coupon NOW.

Rose Dawn, brilliant radio personality known to millions, wants others to benefit from Mayanry as she has done!